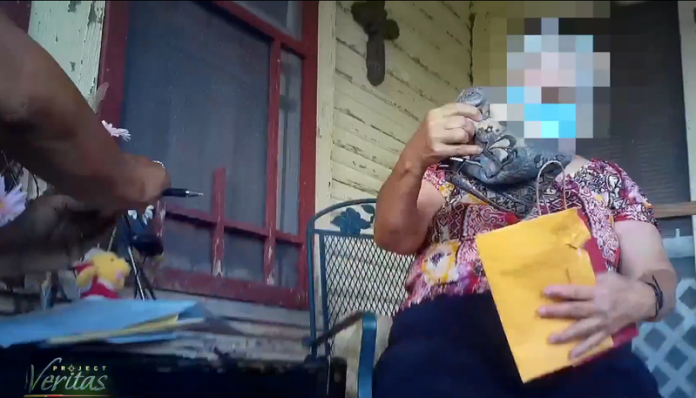 The racket consists of operatives, such as Raquel Rodriguez – “nominally a political consultant for GOP House candidate Mauro E. Garza, the owner of the San Antonio’s Pegasus Nightclub” – who “develops personal relationships with senior citizens when she harvests their ballots and then uses different post offices so that the bundles do not draw suspicion.”

Despite consulting for a GOP candidate, Rodriguez was caught on camera convincing a voter to switch their ballot from John Cornyn (R) to M.J. Hegar (D).

Journalist: “So, John Cornyn, she voted for John Cornyn and then you made her—”

According to Veritas, “After the voter “corrected” her ballot, Rodriguez presented her with a shawl as a gift,” adding “Rodriguez said Garza gave her a gift budget of $2,500 for his campaign, and in addition to the shawls, she gives voters rosaries, diabetic socks and wallets.”

Raquel Rodriguez: “I can honestly say I’m bringing at least at least 7,000 votes to the polls.”

Journalist: “Seven thousand—and that’s for San Antonio for this area too. It’s a lot.”

Rodriguez: “That’s a lot. It’s a lot, period. Just so you know–have an idea–so this is what I do

Gregg County Commissioner Shannon Brown and three co-defendants in connection to an alleged vote harvesting scheme involving a Democratic primary in 2018, he was charged with 134 felony charges, the scam involved illegally going into nursing homes, with the complicity of the nursing home staff, and filling out and forging the signatures of nursing home residents; signing up homeless individuals to vote using the ballot harvester’s address then completing the ballot and forging the homeless individual’s signature”

Project Veritas has released the results of an investigation into alleged ballot harvesting by supporters of Democrat Rep. Ilhan Omar in Minnesota, a key swing state in the 2020 presidential election. Video footage captured by Project Veritas shows an operative, Liban Mohamed, bragging about collecting hundreds of ballots.

Yet, the mainstream media, even after reporting on these stories, will tell you that Trump has no basis in claiming there are instances of voter fraud and mass mail-in voting is a problem. It’s fascinating how that works.

“Why Won’t You Concede?!”- Reporters Yell at Trump after Short Press Briefing