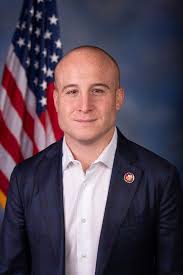 Following continued leadership by Congressman Max Rose, Chair of the Homeland Security Subcommittee on Intelligence and Counterterrorism, in highlighting the threats posed by foreign, violent white supremacist groups and the need to designate them as Foreign Terrorist Organizations (FTOs), the U.S. Department of State today designated a foreign white supremacist group, the Russian Imperial Movement (RIM), along with three of its leaders, as a FTO for the first time in history.

“As Chair of the Homeland Security Subcommittee on Intelligence and Counterterrorism, Congressman Max Rose has been the leading voice in calling for violent foreign white supremacists to be labeled as the terrorists that they are,” said a spokesperson for Rose, who is currently deployed with the National Guard to help with Staten Island’s coronavirus response. “Congressman Rose has continued to publicly make the case that making such an historic designation was merited, necessary, and justified. Today’s decision validates that work—but this is only a first step. The threats these groups pose are real, global in nature, and this designation gives our law enforcement the tools necessary to protect our homeland. Congressman Rose will continue his bipartisan work to combat terrorism and keep our nation safe.”

Last month, following reports that State Department was preparing such a designation, Rose issued a statement saying, “I’ve been leading the fight to treat violent white supremacist groups for what they are: foreign terrorist organizations. I’m hopeful the Administration will follow through and make this designation official because the people on the front lines deserve every tool possible to protect the American people from terrorists. This is about focusing on the threats of today and tomorrow, not just today and yesterday.”

In a recent hearing chaired by Rose, Administration officials testified that that neo-Nazi organizations pose significant threats and FTO designation would give more tools to law enforcement to protect from those threats. Last month, the House Committee on Homeland Security unanimously advanced Rose’s Transnational White Supremacist Extremism Review Act, which would direct the Department of Homeland Security to develop and disseminate a terrorist threat assessment of foreign violent white supremacist extremist groups.

Rose, the first Jewish Member of Congress from Staten Island, penned a column in the New York Times earlier this year with former FBI agent Ali Soufan on the threats posed by transnational violent white supremacist groups interconnected through networks here at home and across the world.