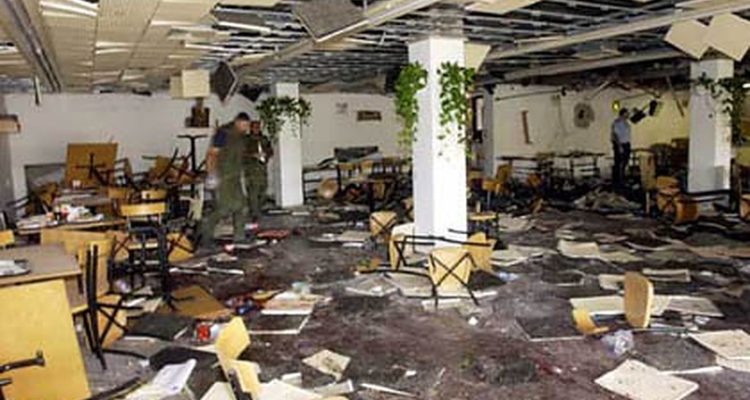 The Palestinian Authority (PA) has raised the salaries of four Palestinian terrorists who carried out a bombing exactly 20 years ago of a café in Hebrew University that took the lives of nine Jews and injured over 80, Palestinian Media Watch (PMW) reported Sunday.

PMW, which keeps track of the PA’s promotion of terrorism, found that the four will get a 14.29% hike now that the 20-year mark has passed since the July 31, 2002 attack and their subsequent arrest in August.

The PA pays terrorists according to a sliding scale of how many people they managed to murder and injure. It also pays more if they have families to “support” and if they come from Jerusalem, which entitles them to an extra 300 shekels a month.

The salaries automatically jump at certain time intervals according to Palestinian law, and after two decades in prison, they will get an extra NIS 1,300, for a total of NIS 8,300 per month. Meanwhile, according to PMW, the average salary of a public employee in the PA is some NIS 2,600.

It doesn’t matter whether the murderers come from the PA’s majority Fatah supporters or belong to the rival Hamas terror group, which controls the Gaza Strip. The university attack was carried out by a Hamas cell that was based in eastern Jerusalem.

Wael Qassem, Wassim Abbasi, Alla Aldin Abbasi and Muhammed Odeh were convicted of planting a bomb in the cafeteria of the Frank Sinatra International Student Center. Nine students and university personnel died in the explosion, including five American nationals.

Four other Hamas terrorists were later arrested for planning the bombing, among other attacks. Abdallah Barghouti is serving the most time – 67 life sentences plus 5,200 years for his behind-the-scenes part in murdering 67 Israelis and injuring some 500 in total.

On the same day that the latest pay raise went into effect, Israel’s security cabinet voted to withhold NIS 610 million from the tax money it collected in 2021 on behalf of the PA. Each year, in accordance with its Pay for Slay law, Jerusalem deducts the amount that the PA pays imprisoned terrorists and their families.

Yet the supposedly tough stance Israel takes against the encouragement of terrorism was already offset last August, when Defense Minister Benny Gantz agreed to give a NIS 500 million “loan” to the PA, which had pled poverty. Israel was to get the money back this summer out of some NIS 600 million it had already frozen due to terror payments the PA made the year before, but no mention has been made of Israel paying itself back yet.

Furthermore, a petition by the Kohelet Policy Forum to the High Court of Justice revealed last month the existence of a secret government fund through which another NIS 100 million was “loaned” to the PA, again circumventing Israel’s own Pay for Slay law.