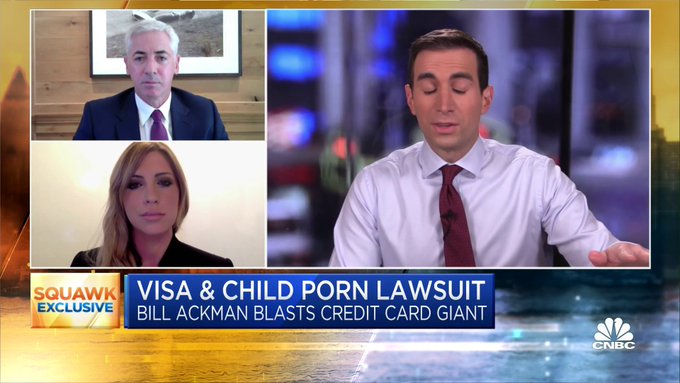 Bill Ackman, the billionaire hedge fund manager and 56-year-old founder and CEO of Pershing Square Capital Management has made on a public stand on his staunch opposition to child pornography and sex trafficking, according to a recently published report in the New York Post.

The Post reported that on Tuesday, Ackman told CNBC, “My interest comes from the fact that I have four daughters. When you think about the worst harm — economic, physical, mental harm you can impact upon a human being — it’s having a child trafficked … video of the rape appear. I find it hard to talk about it.”

For its part, on Friday, lawyers representing Visa asked the federal judge who is presiding over the case to remove the credit card company from the lawsuit but the judge denied the motion, the Post reported.

The Post reported that Ackman also told CNBC on Tuesday, “Remarkably, the company, despite being entirely aware that there’s child pornography on these sites, they continue to provide payment services, until the Kristoff article, and then they shut down the sites overnight which would have bankrupted them.”

He added that: “Within a matter of weeks they re-authorized the merchants and started accepting payments again and the crime continues,” as was reported by the Post.

While Ackman stated that he has no financial stake in either Visa or Mastercard, the Post reported that he said he has also offered to help fund legal fees incurred as a result of any action taken against Visa.

“It’s an extreme measure when Visa or Mastercard shuts down a merchant, but a merchant’s business is fundamentally illegal,” Ackman said. He added that, “There’s traditional breach of fiduciary duty when a company has a product or service that can cause harm.”

Also speaking to CNBC was Visa who said that as a company they condemn any kind of distribution of child pornography as well as any form of sexual exploitation and sex trafficking, the Post reported.

A spokesperson for Visa said, “This pre-trial ruling is disappointing and mischaracterizes Visa’s role and its policies and practices. Visa will not tolerate the use of our network for illegal activity. We continue to believe that Visa is an improper defendant in this case.”

The Post reported that the MindGeek spokesperson said, “Any insinuation that MindGeek does not take the elimination of illegal material seriously is categorically false. When the court can actually consider the facts, we are confident the plaintiff’s claims will be dismissed for lack of merit.”