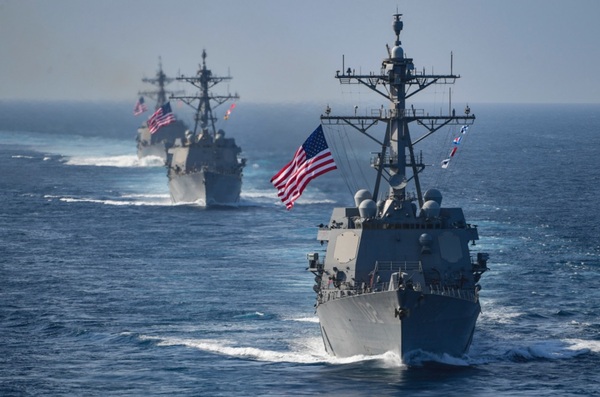 By Eric Utter(American Thinker) The U.S. Navy is preparing to discharge every one of its sailors who refuses to be vaccinated against the China Virus. Apparently, it isn’t enough that the Biden administration’s policies have caused rampant inflation, unemployment, crime, and supply chain issues. Or that it is in the process of gutting the nation’s transportation, public safety, and healthcare sectors. Now it will gravely harm national security by forcing out up to 25% of our Navy personnel. (This after top brass tried to purge the military of those it deemed overly patriotic or too openly Christian. No wonder suicides in the armed services rose by nearly 50% this year alone.)

Can they operate with a quarter of the crew gone?

US Navy photo CC BY 2.0 license

It seems odd for our leaders to want to drastically reduce the number of people in the healthcare and public safety fields during an ongoing pandemic. And a concurrent explosion in crime. (They are constantly warning us that hospitals are overwhelmed and understaffed already.) It seems suicidal for them to deliberately hamper military effectiveness—particularly of our Navy—at a time when global threats are rising, particularly from China.

Be that as it may, pompous, virtue-signaling, clueless clowns like General Mark A. Milley, Chairman of the Joint Chiefs of Staff, have determined that it is more important to fight ubiquitous and dangerous foes — such as man-caused climate change, transphobia, and “domestic terrorists” like those parents who disapprove of the radical curriculum being shoved down their children’s throats by school districts around the country—than it is to worry about China, Russia, North Korea, Iran, or Islamic terrorists.

Think transphobia is enough of a threat? Au contraire. Minnesota National Guard Major General Johanna Clyborne recently tweeted a complaint about yet another existential threat– the Army’s ban on French manicures. Major General Clyborne stated: “AR 670-1 considers it an unnatural color. You can however wear an American manicure but it’s a weird pink that doesn’t look as nice. Balancing a civilian professional look with the ease of switch in and out of uniform as often as I do and still be compliant can be a challenge.” Is this an example of Gallic-phobia?

But back to China. China loosed the coronavirus on the world, with some reports alleging it did so, deliberately or not, during the World Military Games in Wuhan in October of 2019. Is it not ironic that China has fared far better than most of the rest of the world after its virus was set free? And is it not interesting that most of the formerly free world’s governments suddenly began acting like that of Communist China’s and promptly began restricting or eviscerating their citizen’s rights and freedoms?

Isn’t it also a remarkable coincidence that the U.S. Navy is set to neuter itself at the very moment that China is threatening Taiwan as never before? The self-same navy that would be the most important asset and actor in a possible defense of Taiwan.

What’s more, according to NTD News, more people in Taiwan have died from the vaccine than the virus.

As bad as the China Virus is, our governments’ reaction to it has been far worse.

The United States was born via a liberty mandate, the Declaration of Independence. It has since replaced that with mask and vaccine mandates. Once upon a time, we liberated nations like France. Now we enslave our own people… and prevent them from serving, the hell with the rest of the world unless they all want to come and live here.

As I have previously written here and elsewhere, COVID-1984 could essentially end our republic.

It may well lead to the end of the Republic of China (Taiwan), as well.

Will it simply be a “coincidence” if we allow Taiwan to be absorbed by China?

Or will China’s actions—and our government’s responses—be as chickens that have predictably come home to roost? In other words, was all of this planned?