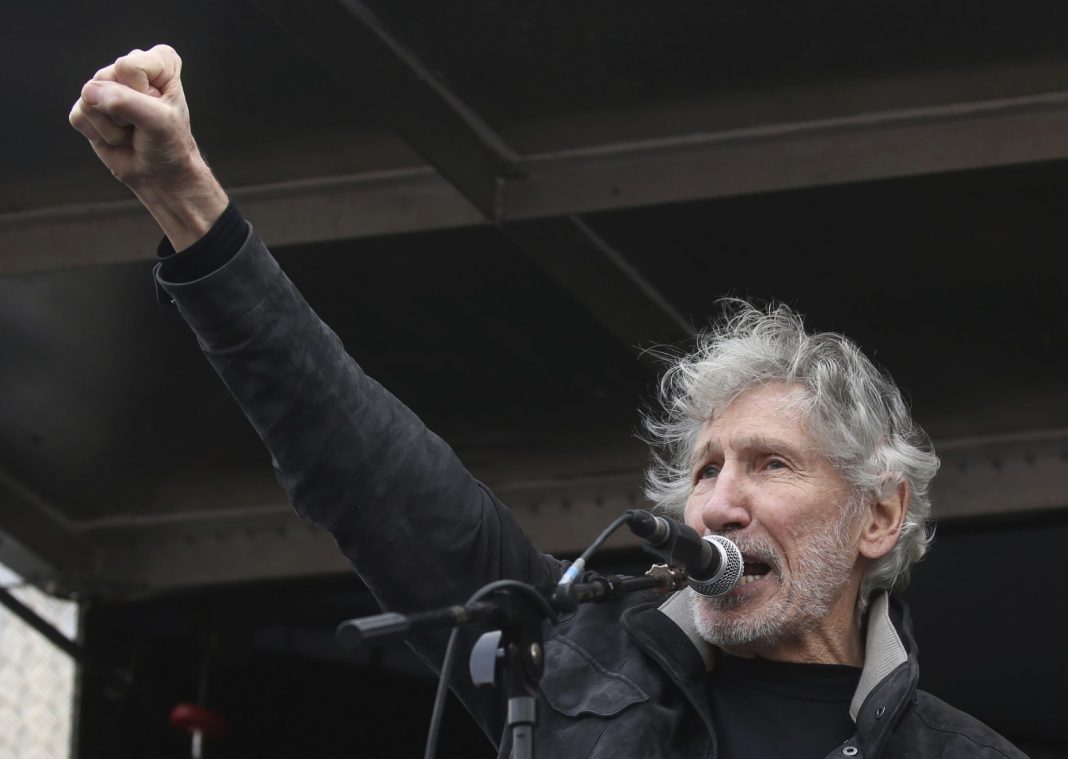 It is common knowledge that celebrities, and especially rock stars, are apt to change life partners faster than most people change their socks, but in the case of Pink Floyd front man Roger Waters, 78, he is doing it at blinding speed.

The Israellycool.com web site reported that in 2016, only a short time after he split with wife number four Laurie Dunning, Waters began an affair with Palestinian journalist and author Rula Jebreal. And he did all this behind the back of her Jewish husband who was also friends with Waters.

Jebreal and Waters were introduced around five years ago by Durning and Jebreal’s husband, biotech entrepreneur Arthur Altschul Jr., from whom she is separated.

Waters, whose dubious claim to fame (in addition to churning out mediocre rock songs at best and tortuous garbage at worse) is positing himself as the leading advocate of the Boycott, Divestments and Sanctions movement whose aim it is to destroy Israel in every possible manner.

Waters’ vociferous hatred of Israel and his egregious anti-Semitic posture has been developing for decades and with the passage of time his malevolence has grown rapidly.

Back in 2013, the Anti-Defamation League (ADL) which once defended Waters from accusations of anti-semitism, announced in December of that year that “anti-Semitic conspiracy theories” have “seeped into the totality” of Waters’ publicly announced views.

The announcement by the ADL was made in response to an interview at the time in CounterPunch magazine which was conducted with Waters. In the interview, Waters compared the treatment of Palestinians by Israel with the treatment of Jews by Nazi Germany.

“Judging by his remarks, Roger Waters has absorbed classic anti-Semitic conspiracy theories, and these have now seeped into the totality of his views,” former National Director of the ADL, Abe Foxman, told The Times of Israel at the time. “His comments about Jews and Israel have gotten progressively worse over time. It started with anti-Israel invective, and has now morphed into conspiratorial anti-Semitism.”

“How sad that a creative genius could become so perverted by his own narrow-minded bigotry,” Foxman added.

During the CounterPunch interview, Waters reportedly said that, in regard to Palestinians,  that the “parallels with what went on in the ’30s in Germany are so crushingly obvious.” Furthermore, he stated that “there were many people that pretended that the oppression of the Jews was not going on. From 1933 until 1946. So this is not a new scenario. Except that this time it’s the Palestinian people being murdered.”

According to Newsradio.com, the questionable comments came when CounterPunch asked Waters how he felt about other artists commenting that “mixing arts and politics is wrong.” Newsradio.com reported that in response, Waters alluded to the fact that this subject would be featured on his upcoming album. He reportedly said “Now, if you’re not interested in any of this, if you’re one of those ‘Roger I love Pink Floyd but I hate your f***ing politics,’ if you believe artists should be mute, emasculated, nodding dogs dangling aimlessly over the dashboard of life, you might be well advised to f*** off to the bar now, because time keeps slipping away.’ That’s my answer to your question.”

Specifically speaking about Jews and Israel, he is reported to have said during the CounterPunch interview that “the Jewish lobby is extraordinarily powerful here and particularly in the industry that I work in, the music industry and in rock’n roll, as they say.”

While referring to Israel’s “right wing rabbinate,” Waters said “they believe that everybody that is not a Jew is only on earth to serve them and they believe that the Indigenous people of the region that they kicked off the land in 1948 and have continued to kick off the land ever since are sub-human. The parallels with what went on in the 30’s in Germany are so crushingly obvious that it doesn’t surprise me that the movement that both you and I are involved in is growing every day.”

Additionally, Waters is not only publicly critical of Israel but he has led a campaign to convince others artists not to perform in Israel and to boycott the Jewish state. Waters has also used pig-shaped balloons with Jewish symbols, including a Star of David, at his concerts in order to get the message across that he thinks Jews are capitalist pigs who are ruthless oppressors of the Palestinians. At the time, Rabbi Abraham Cooper of the Simon Wiesenthal Center denounced the balloon as a “grotesque display of Jew-hatred,” and calling Waters an “open hater of Jews.”

While the ADL came forward with the acknowledgment of Waters’ leaning towards anti-Semitism, the organization also stated that Waters has a long history of using these symbols in his concerts. To be specific, the pig symbol in general comes from the Pink Floyd album “Animals” and the balloons are flown during any rendition of the song “Pigs,” which has an anti-Big Brother, anti-authoritarian tone.