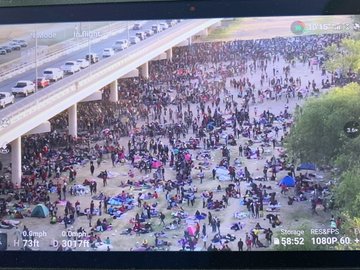 By Sandy Fitzgerald(Newsmax) The thousands of migrants that have converged under the bridge that connects Del Rio, Texas and Mexico’s Ciudad Acuña, creating a makeshift camp with few basic services in intense heat is proof of a continuing problem at the border that is just getting worse under the Biden administration, Texas Attorney General Ken Paxton insisted on Newsmax Saturday.

“Every day that we don’t get this resolved, that brings more drugs into the country, more COVID, more crime, and more people,” Paxton said on Newsmax’s “Saturday Report.”

“It’s out of control and the Biden administration is not just allowing it to happen. They’re inviting them.”

The Biden administration is reportedly working on plans to fly many of the thousands of Haitian immigrants who are making up much of the crush at the bridge back to their homeland. Details aren’t yet finalized, but an official with direct knowledge of the plans said there will likely be five to eight flights per day until the Haitians are returned.

But Paxton said that President Joe Biden will neither go to the border nor listen to the people who are being affected by his policies.

“These people crossing the border affect negatively the people along the border,” said Paxton. “It affects their crime rates. They have all these costs that they’re incurring. There are risks for greater COVID transmission, and so they’re worried about their safety. The president is not worried. If he was he’d stop it. If he was, he’d be down there talking to these people about what they’re dealing with every day.”

Further, Biden is inviting migrants into the United States, even while he knows many have COVID-19.

“He’s letting them in the country and then he’s moving them all over the country to spread COVID, and then we have this increase in COVID, and we wonder why,” said Paxton.

He also complained that immigrants are being taken to other cities and states and dropped off.

“I talked to a couple of Dallas police officers,” said Paxton. “They told me that they saw these buses come in from the border in Dallas, and people got off the buses and they just walked into the night. There’s no tagging them. There’s no vetting them. They just disappear.”

Meanwhile, Texas is part of a coalition pushing back against Biden’s vaccine mandate for private-sector employees, and Paxton said the fight centers around whether the president has the power under the Constitution to establish the law.

“The founders set up three branches of government,” he said. “They did not give the president the edict issuing ability and that’s what he’s trying to do…this is the most out of control president we have ever seen, and it’s up to the states to do their best to try to stop this.”