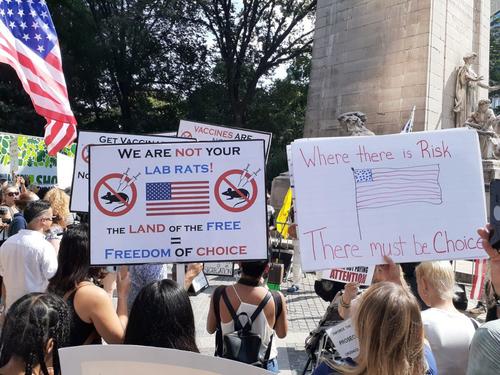 By Enrico Trigoso(The Epoch Times,) New York—Thousands gathered near Central Park in Manhattan on Saturday to express their discontent with the vaccine mandates and passport requirements implemented on the city by Mayor Bill de Blasio this month.

1000s take over Time Square in NYC for the protest against the mandatory shot. At the world Freedom rally #NYC #Corona #freedomrally pic.twitter.com/l1OY43nVTc

New York City started enforcing a COVID-19 vaccine mandate Monday, with de Blasio warning that “there’ll be consequences” for those who do not follow the rules.

At the World Freedom rally in Time Square in NYC. 1000s Protesters against the mandatory shot hug each other with no fear of the Rona #Covid_19 #NYC #LOVE #freedomrally pic.twitter.com/bMXzAIbApX

Participants first gathered at Columbus Circle and then marched to Times Square, led by one of the speakers, Jo Rose.

“If you took the vaccine, I love you. This not against you, we are pro-freedom,” she announced to passersby.

Participants chanted “my body, my choice,” “no vaccine passports,” and “freedom over fear!”

Massive crowd match down midtown NYC at the protest against the mandatory shot.
The chant ” WAKE UP NY, WAKE UP NY ” #nyc #VaccineMandate #breaking pic.twitter.com/nyrcXSiavx

At the rally in Times Square, people spoke about standing up for their rights and against tyranny.

Among the diverse group of speakers, the themes of unity and freedom were often brought up.

Massive crowd matches down midtown Manhattan for the protest against the mandatory shot .
They chant ” MY BODY MY CHOICE ” #DoNotComply #nyc #VaccineMandate pic.twitter.com/CSZQ8Uc1AV

One speaker said, “The only thing that gathers us all together, different groups, different types, is our stance against tyranny. When they try to take away our freedoms, we stand.”

The crowd cheered in response.

Artist Tessa Lena also spoke at the rally: “It’s not about even those injections, it’s about establishing a system for artificial immunity.” She spoke about how “we are people of love, we are going to win with love.”

Full video from yesterday’s protest against the mandatory shot in NYC. The protest was put together by Teacher’s for choice.
For licensing email LeeroyPress@gmail.com #NYC #VaccinePassport #tuesdaymotivations pic.twitter.com/c90k7Zr9A7

Speaker Kevin Jenkins said, “This is about the very essence of what God gave us, and that is the power to be free. … It’s about the power of love that will allow us to win this battle.”

Jenkins compared the vaccine segregation to racial segregation in the 1960s. “Sixty years ago, I couldn’t walk in a restaurant because they said I was unclean … Now they’re telling us we are unclean again, not just black people, not Latino people, but all of us. We have to unify beyond race and love each other as humans.”

He urged people to only patronize restaurants that support freedom.

“When they tell you no to your humanity, you tell them no to their business.”

Mary Josephine Generoso, manager of the Pasticceria Rocco bakery in Brooklyn, said she would not be discriminating against customers by requiring proof of vaccination, defying the mandate implemented by the mayor. The business has placed signs announcing its policy to customers.

“I heard de Blasio speak, and immediately we created that sign that said ‘we do not discriminate.’ There is not a bone in my body that will allow me to discriminate against anybody for any reason any day of the year.”

She called de Blasio “the greatest unifier of New York City, because he’s brought us all together for one cause.”

“I’m taking this stance against the vaccine mandate because obviously, it’s completely discriminatory. It’s forcing me to segregate customers based on a vaccine,” she told The Epoch Times.