(AP) — Theater royalty — in the form of Kristin Chenoweth, Julie Taymor and Lin-Manuel Miranda — welcomed back boisterous audiences to “Wicked,” “The Lion King” and “Hamilton” for the first time since the start of the pandemic, marking Tuesday as the unofficial return of Broadway.

Chenoweth surprised the crowd at “Wicked” by appearing onstage for a speech on the same stage where she became a star years ago. “There’s no place like home,” she said, lifting a line from the musical. The crowd hooted, hollered and gave her a standing ovation.

Taymor, the director and costume-designer of “The Lion King,” congratulated her audience for the courage and enthusiasm to lead the way. “Theater, as we know, is the lifeblood and soul of the city,” she said. “It’s time for us to live again.” And Miranda at “Hamilton” summed up the feeling of a lot of people when he said: “I don’t ever want to take live theater for granted.”

“The Lion King,” “Hamilton” and “Wicked” all staked out Tuesday to reopen together in early May after then-New York Gov. Andrew Cuomo picked Sept. 14 for when Broadway could begin welcoming back audiences at full capacity.

The trio of shows were beaten by Bruce Springsteen’s concert show in June and the opening of the new play “Pass Over” on Aug. 22, as well as the reopening of two big musicals — “Hadestown” and “Waitress.”

But the return of the three musicals — the spiritual anchors of modern Broadway’s success — as well as the return of the long-running “Chicago” and the reopening of the iconic TKTS booth, both also on Tuesday, are important signals that Broadway is back, despite pressure and uncertainty from the spread of the delta variant.

The crowds virtually blew the roof off the three theaters. At “Wicked,” they stood and applauded the dimming of the lights, the welcome announcement, the arrival and departure of Chenoweth, the opening notes of the first song and several moments during that song, especially when Glinda says: “It’s good to see me, isn’t it?”

At “The Lion King,” the opening song “The Circle of Life” was virtually drowned out by cheers and clapping, while every star in “Hamilton” had to pause to let the entrance applause die down enough to be heard again. 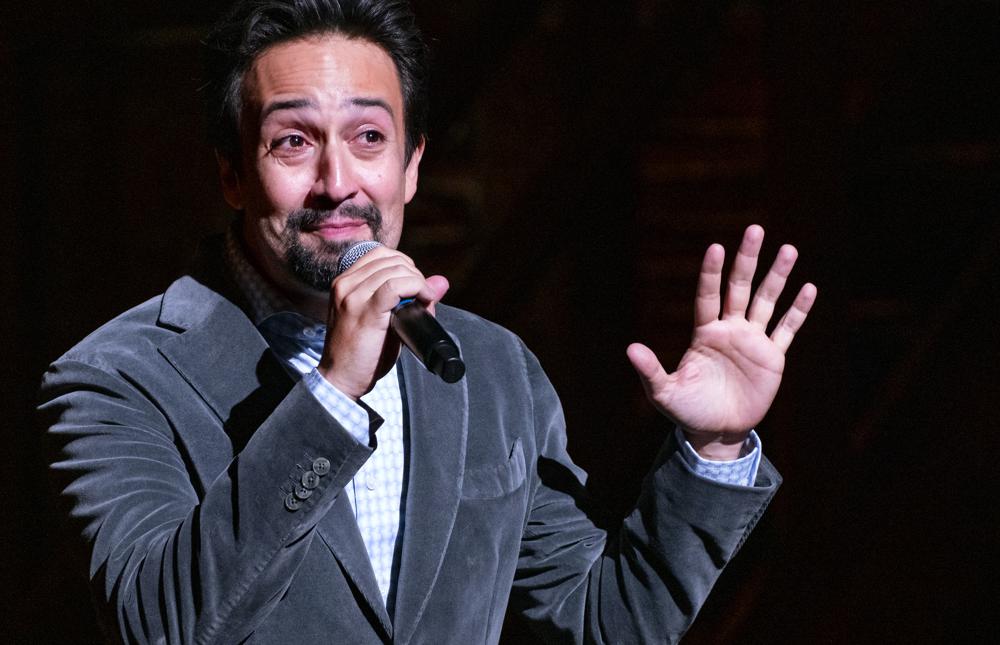 Linda Diane Polichetti, an usher at “Hamilton,” said she was proud to back at work. “I’m just glad to be back because the world I was in, I wasn’t recognizing,” she said. “I love my show. I love my cast.”

Ticketholders to all three mega-hits had to prove they were fully vaccinated with an FDA- or WHO-authorized vaccine and masks must be worn at all times, except when eating or drinking in designated areas.

Vaccine checkers in bright T-shirts inspected phones and cards as the crowds made their way into the theaters. “Thank you for getting vaccinated and wearing a mask,” Miranda said, to roars of approval. The crowds were very compliant with the new rules, only lowering their masks for the obligatory selfie. Taymor joked in her speech that the performers often wear masks. “Guess what? You get to wear masks tonight.”

Before the shows, Miranda, Taymor and “Wicked” composer Stephen Schwartz stressed that Broadway has implemented safety protocols that make cramming strangers into theaters as safe as it can be.

“We go to a theater for catharsis. Literally that’s what we go for: to be in communion with each other, hear a story told in the dark and experience catharsis,” said Miranda. “For a while, it wasn’t safe to do that. And it’s safe to come back now with the protocols we have in place.”

Actors across Broadway say they’re itching to get back on stage after more than a year of waiting, trusting the health experts to make the process safe. The bulk of Broadway’s theaters will be reopened by Thanksgiving.

“It’s a little bit like when you’re on an airplane and there’s turbulence,” said Sharon Wheatley, a veteran actor in the show “Come From Away,” which resumes its Broadway run Sept. 21. “I have to trust the pilot, I have to trust the air traffic controllers. I feel nervous, but I have to understand that I don’t know as much as these people do.” 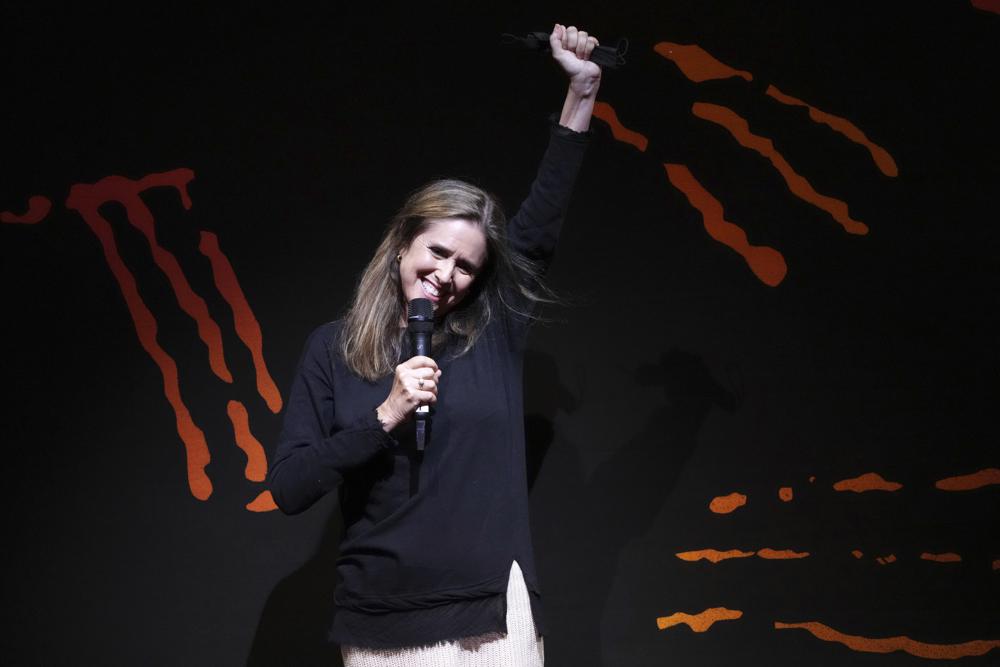 Julie Taymor welcomes theatergoers back to Broadway before a performance of “The Lion King,” at the Minskoff Theatre. (Photo by Charles Sykes/Invision/AP)

Another sign that Broadway is inching back to normalcy is the re-opening of the famed TKTS booth in the heart of Times Square, where visitors can get same-day and some next-day discount Broadway and off-Broadway tickets.

“It’s such a big step forward,” said Victoria Bailey, executive director of the nonprofit Theatre Development Fund, which runs the booth. “To get it open and such a symbol to people that theater is coming back.” 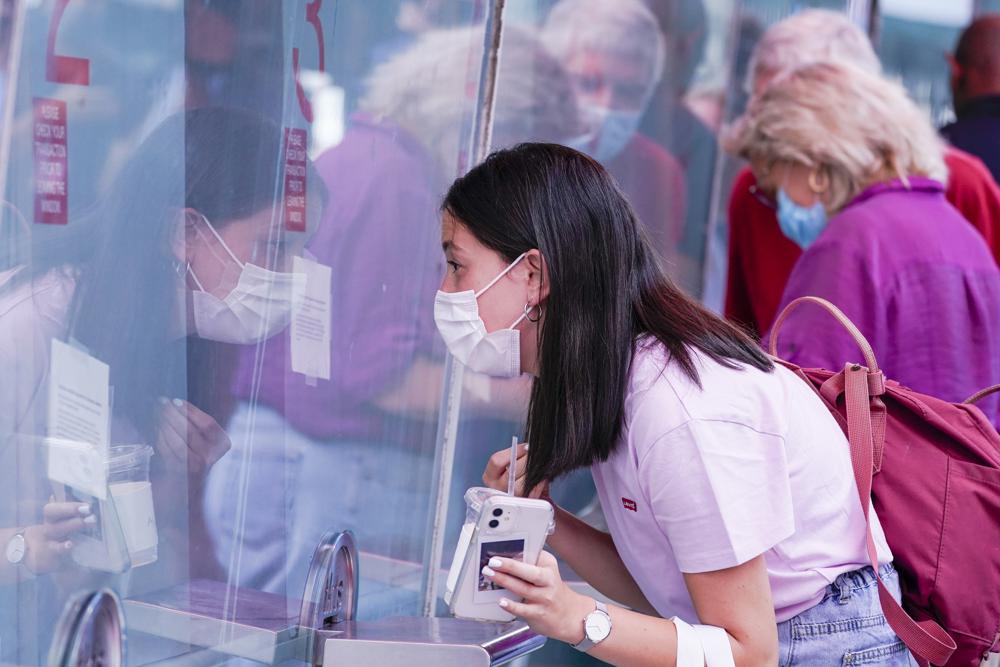 Bailey says Broadway’s return will be less like a flick of a light switch and more like a dimmer, with a slow build to regular attendance. “We’ll know so much more in two or three weeks, but you can’t swim unless you can start by dog-paddling.”

During the pandemic, Miranda saw his visionary show turned into a critically hailed filmed version for Disney+, but said there no substitute for seeing it live.

“It’s one thing to see something on the screen. And I’m thrilled ‘Hamilton’ was was available on a screen in a time when we couldn’t go to a theater. But I’m even more thrilled that now it can be experienced the way it was meant to, live in front of an audience, the final collaborator every night.”