After all the good government groups promises that Rank Choice Voting (RCV) was going to give voters a stronger voice at the ballot and elect more diverse elected officials, it gave them the same voice as they had in past elections.  98% of the candidates ahead, after in person early and primary day voting (the old system) wound up winning their elections after the RCV counts were added in.  There have been no media articles that RCV system made no difference in outcome of the mayor, comptroller, and council races, except for the NY Times, which told its ideologically gullible readers with incorrect facts, that RCV was a success.

After the millions spent on educating the voters and training the Board of Elections (BOE) to use the new RCV system, the good government groups that gave us RCV have left us with the same problems, maybe even more than voters faced before the 2021 primary:

A major new problem the RCV system caused, being covered up by the media is that more than 140,000 ballots were “exhausted,” meaning they did not name either finalist or were otherwise thrown out.  Those ballots represented nearly 15% of the 940,000 votes cast.  Only 10 races were won by more than 15%.  Clearly some of those who have lost would have won under the pre-RCV voting system, when every vote was counted.

The NY Times Covered-Up RCV Failure to Deliver Any Change

It is no surprise that the liberal NY Times is trying to cover for the far-left political machine and good government supporters who promised the RCV voting system would increase diversity in city government.   The following quote from a council member in the 7/23/21 NY Times article was flatly wrong.  “The NY election showed the (RCV) system benefits, including the diversity of the winning candidate like Mr. Adams.”  Adams and the other diversity candidate that won their election, won their elections in the first round which counted early and in person primary day voting, before the RCV rounds were counted.  The only race that RCV changed the outcome was the 25th council district, where two so called diversity candidates from different immigrant groups ran against each other.

The Times repeated another incorrect statement in the same story by supporter of RCV: “Ranked-choice advocates say the system helped improve the fortunes of female . . . women finished second and third in the mayoral primary.”  All 29 women who won council seats, were ahead before RCV tallies were included.  Both Maya Wiley and Kathryn Garcia were in 2nd and 3rd places before and after RCV votes were counted, they just changed places when all the RCV rounds of votes were counted.  Sadly, as part of their liberal narrative the NY Times is supporting RCV over facts and truth.

Many of the same lobbyists that were investigated because for their prior work with the mayor, worked in the 2021 primaries.  Lobbyists were also at the center of both Assembly Speaker Sheldon Silver, and State Senate majority leader Dean Skelos convictions.  The leader of the Advance Group Scott Levenson ran the PAC NYCLASS that was investigated by the FBI for using de Blasio’s relatives’ contributions, to destroy the 2013 campaign for mayor of Speaker Christine Quinn.  A couple days after de Blasio was elected mayor, the biggest fund raiser for NYCLASS and the mayor de Blasio campaign, hired Levenson for his company Edison Parking which now stands to benefit from the Soho rezoning that the mayor is pushing.  The FBI drop it investigation of the mayor and Advance was never investigation for conflict of interests with its secret involvement of the UFT PAC.  This year the Advance Group was paid $1.5 million by city council candidates who received matching funds. 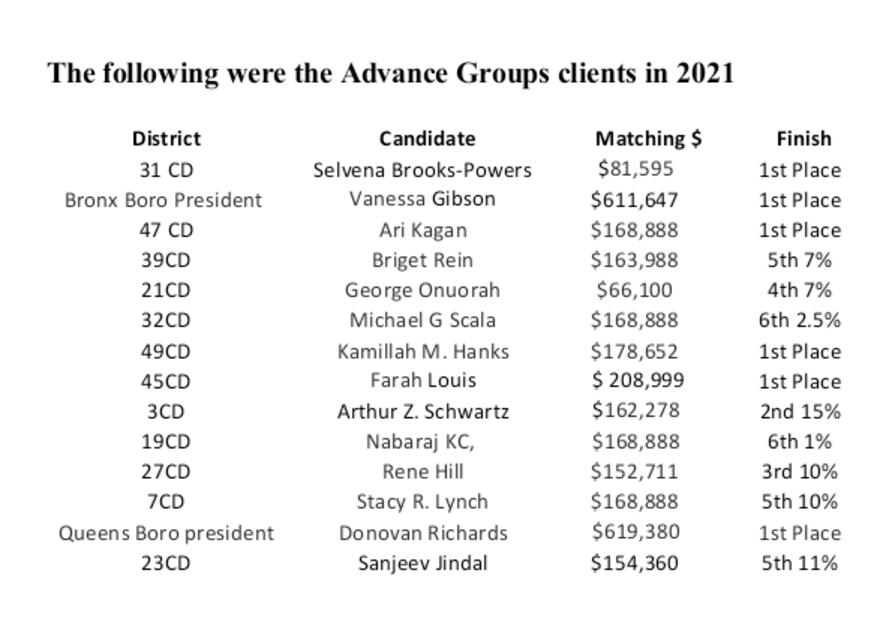 Sheinkopf: Supporters of RCV Have Made Lobbyists More Important Than Voters to Candidates

“We have created a permanent industry of political consultants who have guaranteed income,” said Sheinkopf, a consultant lobbyist for 40 years. “We have a business for people who don’t win and [that] is provided money from the taxpayers,” Sheinkopf said.  Why have the city’s good government leaders and media ignore what the late Village Voice reporter Wayne Barrett warned us in 2010 about government doing business with pay-to-play lobbyist consultants like Sheinkopf? “Lobbyists elect Kings, so they can eat the Kings meat.” 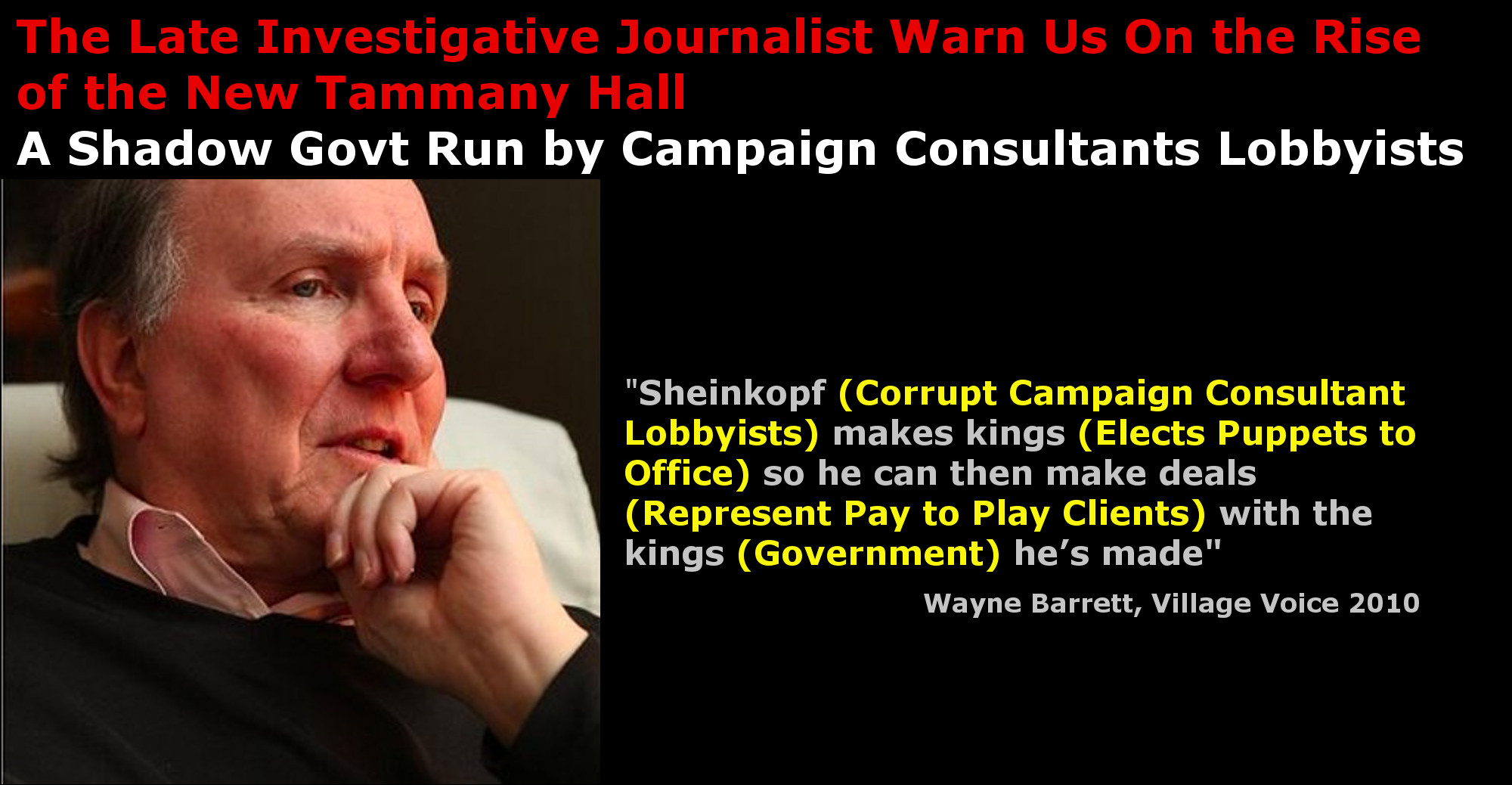 The city’s “good government” leaders like Common Causes’ Susan Learner must answer why she is pushing for reforms like RCV that gives power to lobbyists, unions, WFP, DSA and other left wing organized groups outside the community to pick candidates, run elections (to serve their needs in government) and not a public finance program like Democracy Vouchers (DV) that empowers voters and neighborhoods to pick their elected officials?  Learner must explain why the switch to RCV has only increased the reliance the candidates—and, by extension, the taxpayers—place on these consulting specialists, who are now called in to game out ways for a candidate to reach 51%, rather than 35%, in a crowded field?  Finally, Learner must explain why she created the condition for lobbyists to have even more power at City Hall, perhaps a takeover of the city council?

Under the Democracy Voucher public finance system (in Seattle), the government gives four $25 vouchers to registered voters and asks voters to assign their vouchers to their preferred candidates.  Democracy Vouchers are the most democratizing and egalitarian method of public funding for a campaign that has been invented, according to former councilman member Sal Albanese.” Switching to the Democracy Vouchers system will stop the city from wasting millions, funding candidates created by lobbyist and other outside groups, who have no grass roots, local support.  If the city no longer funded candidates with no community support, consultant-created candidates would drop out, allowing voters to better understand and learn more about those still running.

The runoffs in the old system gave power to the voters to learn more about the top two candidates by asking questions and extra debates in citywide runoff races.  There were two problems with the runoffs, they did not include council candidates, and low turnout.  The first problem: no council runoffs could easily be fixed by a charter commission change requiring runoffs.  The problem with low turnout can be fixed with early voting and mailing absentee ballot applications to everyone like the BOE did during the height of the pandemic.