AOC’s endorsement in Brooklyn turned out to be more than an endorsement.  It can now officially be labeled a movement that not only propelled Brad Lander in his race for City Comptroller and helped candidate for Brooklyn Borough President Antonio Reynoso obtain large leads in round one of the counting process.  It also helped at least eight Brooklyn city council candidates lead in the first round of counting; some with commanding leads. This growing progressive machine also helped mayoral candidate Maya Wiley’s rise to second place in the first round of the mayor’s race.

Of course, it was not only AOC that effected these Brooklyn races.  It was a combination of a directorate of interlocking progressives, liberal groups and PACs, including AOC’s Courage to Change, that work remarkably well together.  They help in acquiring extra money and resources for the chosen progressive candidates, beyond public funding limits.  Progressive groups and PACs with money and resources that are difficult to trace are where the funding comes from. 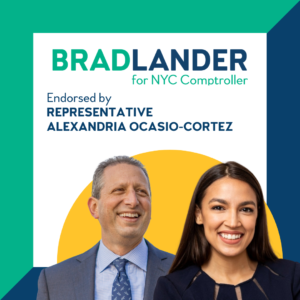 One of the coalitions’ main leader is the Working Families Party (WFP). They not only won most of the competitive city council races in Brooklyn, but they also won races in Queens and the Bronx. Tiffany Cabán, who narrowly lost a race for Queens District Attorney in 2019, is leading in a primary for a City Council seat. And in Astoria the Democratic Socialists of America (DSA) now have a DSA candidate elected on every level of government.  Democratic-Socialist insurgent India Walton toppled four-term incumbent, Buffalo Mayor Byron Brown — an ally of Gov. Andrew Cuomo — in Tuesday’s primary election.

Three Brooklyn community leaders in majority-black districts also are leading after round one. In the past the Brooklyn County leader was a big player in picking the new council speaker, clearly not this year.  None of these can be called part of the Brooklyn Democratic machine: Darlene Mealy, a Cabin former councilwoman who represented Brownsville, earned 57 percent of the vote to Alicka-Ampry-Samuel’s 42 percent — a rare ousting of an incumbent Council member.  Charles Barron, is slated to once again take over his wife’s current seat, which he formerly held before being term-limited and successfully running for an Assembly seat based in East New York. Barron earned roughly 47 percent of the first-choice votes.  Mercedes Narcisse who has run against Frank Seddio’s Brooklyn machine is leading in the 46th Canarsie council district with 36% of the vote. Eleven of thirteen competitive city council races went to progressives or community activists.

The progressive machine is more powerful than the Brooklyn Democratic Party machine and the Jewish community is pulling out their votes and their endorsements.  Among the endorsements of Robert E. Cornegy Jr who is trailing Reynoso by 26,882 votes after the first round of public counting was former Brooklyn Boss Frank Seddio’s club, known as the Thomas Jefferson Democratic Club. The current Brooklyn Democratic leaders are Rodneyse Bichotte and Alan Maisel. Also involved are Jewish leaders and organizations such as Kalman Yeger, the Flatbush Jewish Community Council and the Jewish Press  as well as many other papers.

Even Councilman Justin Brannan who is running for council speaker endorsed Bichotte’s machine pick Cornegy for BP, in his attempt to be all things to all groups.  Brannan also endorsed several of the progressive candidates.

How the AOC’s Progressive Machine Works

In the 40th district, AOC endorsed Rita C. Joseph, who is ahead in the first round with 5,060 votes or 25.23%.  Rita C.  Joseph was also endorsed by AOC’s PAC Courage to Change, Black Lives Matter New York, Zephyr Teachout, Streets PAC, The Jewish Vote, Roadmap for Progress, Make the Road Action, NYC Against ICE and Brooklyn Progressive Alliance.  Josue Pierre–the cousin of Brooklyn Democratic County Chair, Rodneyse Bichotte, is in second place with 4,073 or 20.31% of the vote.

Notably, Bichotte’s candidate in the 46th Council District, Shirley S. Paul, is also in 2nd place.  With 3,162 votes, Bichotte’s backed Paul is almost 20% behind the local community organizer Mercedes Narcisse.  Bichotte further lost the race for the Brooklyn Surrogate’s Court and Brooklyn Borough President as she backed Robert E. Cornegy Jr behind Reynoso.  Bichotte’s backed Judge Dweynie Esther Paul is behind the front runner Rosemarie Montalbano by almost a two to one margin.  In today’s Brooklyn, Montalbano who is part of the former Brooklyn Boss Seddio’s inner circle is the new progressive surrogate of the borough, elected by the liberal brownstone vote.

In the 39th AOC endorsed Shahana K. Hanif has 10,691 votes or 32.42%.  Brandon West is in second place with 7,427 votes or 22.52%.  Hanif is the former Director of Organizing and Community Engagement in Brad Lander’s City Council office.  Hanif was also endorsed by the Working Families Party, The Jewish Vote, the Progressive Change Campaign Committee, our revolution Muslim democratic club of NY, Individual Nation BK, NY Progressive Action Network, Communities of Change, and the Tenant Pac.

In the 38th, AOC endorsed candidate Alexa Aviles has 4,431 or 43.46% in the first round.  Yu Lin, with 1,894 votes or 18.58% is in second place in round one. Aviles was also endorsed by Bernie Sanders, WFP, NY Communities of Change, Democratic Socialists of America, Citizen Action! The Jewish Vote, Union of Arab Women, Road to Justice NYC, Make the Road Action, Progressive Women of NY, UFT, Hotel Trades Council, Nydia Velázquez, Julia Salazar, Jabari Brisport, Jumaane Williams, and Antonio Reynoso.

In the 37th, AOC endorsed Sandy Nurse, who received 4,905 or 51.58% of the votes.  Nurse beat the incumbent council member Darma V. Diaz, backed by Brooklyn Democratic Party machine, who received 2,28 votes or 6 24.04%.  If Nurse retains more than 50% of the vote after the absentee ballots are counted, she will not have to go through the RCV process.  Nurse was also endorsed by Antonio Reynoso. Nydia Velasquez, Jumaane D. Williams. Make the Road, NY Communities of Change, WFP, Citizens Action of NY, Street PAC, 32BJ, 1199, Tenant PAC, The Jewish Vote and LUNIA! NY

In the 36th, AOC endorsed Chi Ossé, who received 7,690 votes or 37.23% in the first round.  In second place is Henry L. Butler with 4,721votes or 22.86% in the first round.  Ossé was also endorsed by Courage to Change PAC, WFP, Our Revolution, Black Lives Matter PAC, Tenant PAC, Laborers’ International Union of North America, Citizen Action, The Jewish Vote, Roadmap for Progress and Brad Lander.  Chi Ossé is winning the first round despite his statements on Twitter, published by the NY Post, which included statements such as “bro…your girl smells like a halal cart,” “rumor has it” that then-15-year-old British actress Millie Bobbie Brown can “fit 37 pistachios up her ass,” and the infamous “knocked over one of those Jesus worshippers on the subway this morning…feeling random and sinful.”

The 34th Council District:  Williamsburg, Bushwick, and crosses the Queens border into Ridgewood