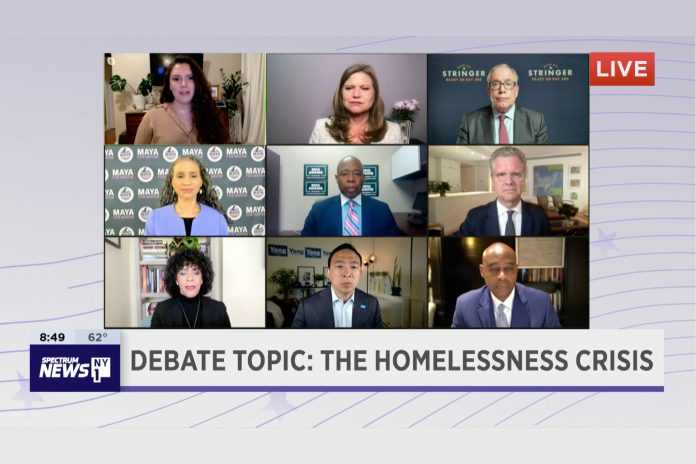 This article was originally published by THE CITY

The two poll frontrunners garnered the most attention as Yang took knocks on his failure to vote in past elections and former cop Adams defended his tough-on-crime stance. And nobody was praising Bill de Blasio…

The eight leading Democratic mayoral candidates traded barbs Thursday night as they pitched themselves to lead New York City out of the pandemic devastation in the first official debate of the 2021 primary season.

Broadcast on WNYC and NY1 and moderated by NY1’s Errol Louis, with questions from WNYC’s Brian Lehrer and THE CITY’s Josefa Velasquez, the debate marked the biggest audience for the mayoral wannabes after months of online forums.

Garcia, the city’s former sanitation boss, emphasized her experience getting things done in a bureaucracy, while Stringer, the city comptroller, touted his record as a watchdog.

McGuire argued his business credentials positioned him to move the city forward, while Morales said her nonprofit experience set her up to lead.

But just about all of them paid outsized attention to former presidential candidate Yang and Brooklyn Borough President Adams, the dueling frontrunners in the polls.

Here are some takeaways from the at-times combative two-hour city Campaign Finance Board-sanctioned debate — the first of three planned leading up to the crucial primary.

With polls showing Yang and Adams, variously, in the lead, the other candidates weren’t pulling any punches.

As Adams put it, “Once candidates start getting desperate, it’s going to get really nasty.”

Wiley criticized Adams, a former cop, for praising the controversial police practice of stop-and-frisk as “a great tool.” He told her the question indicated her “failure” to understand police enforcement.

She cited her role leading the Civilian Complaint Review Board, which Adams also bluntly called a failure.

Adams, who three years ago made waves when he pledged to carry a gun as mayor and do away with the security detail, clarified with an updated stance when questioned by Donovan: He said he would only arm himself if threatened and would merely reduce the size of the detail.

While Adams hit back, Yang largely defended himself without going on the offensive.

McGuire questioned Yang about his past comments that Venture for America, the nonprofit he founded, might not be the best fit for Black applicants. Yang said his organization eased inequalities in the tech space — before saying he didn’t remember making those remarks.

Donovan also said Yang didn’t get the results to live up to the “Champion of Change” declaration then-President Barack Obama bestowed upon him. “This is not time for a rookie as mayor,” Donovan said.

Stringer asked Yang if he’d ensure lobbyists wouldn’t have unfettered access to City Hall — a nod at how lobbying firm Tusk Strategies is running Yang’s campaign. Yang simply agreed that government should be for the people and not beholden to special interests, without getting into details.

Adams went on the attack when Yang touted his work helping to swing two Senate seats from red to blue in Georgia. Adams retorted that Yang was wrongly taking credit for the work of voting rights advocate Stacey Abrams and other Black women.

Also on the election front: Yang had to answer to skipping out on voting in decades’ worth of mayoral elections. He insisted he was invested and engaged in the issues affecting New York City “in other ways,” especially as a public school parent (one of his two children attends public school). Not all “energy and ingenuity” is to be found in government anyway, he said.

For all the focus on Yang and Adams, you might have thought that most of the candidates were running hardest against Mayor Bill de Blasio.

Morales, considered the candidate furthest to the left, described how de Blasio successfully rode a progressive “wave” into office, but said he lacked the management skills to execute his vision “from beginning to end.”

Yang suggested the $30 million de Blasio committed to launching an ad campaign to bring tourism back to the city was insufficient. Stringer criticized de Blasio’s approach to budgeting, saying as comptroller he pushed back on the mayor’s plan to cut programs or lay off workers.

Wiley, who previously served as de Blasio’s counsel, distanced herself from her former boss’s fundraising missteps that she had advised him on. She also pointed out that she spoke up against police brutality during protests last year when de Blasio was initially unwilling to condemn the NYPD.

An overarching theme of the debate was how the next mayor needs to ensure an equitable economic recovery as the city reopens, with an eye on helping small businesses.

The Brooklyn Chamber of Commerce estimated about 20% of small businesses closed permanently due to the pandemic. Candidates pitched ideas for how they’d help businesses thrive by easing restrictions while still protecting the public.

Adams and Wiley came together for a brief moment of agreement in committing to rolling back rules that govern where shopkeepers can place signage, noting the hefty fines businesses get for small infractions. Stringer said he’d overhaul the Department of Buildings to make it more business friendly.

Morales said she’d include Arab-American businesses under the category of minority- and women-owned businesses, a designation that is meant to ensure often-disadvantaged outfits can get city contracts.

The candidates also spotlit restaurants, which struggled during the pandemic to stay open with limited or no indoor dining. McGuire said he’d foster more outdoor dining, which was a lifeline to many eateries and proved popular among New Yorkers.

Garcia suggested allowing restaurants to schedule health inspections in advance so that they don’t lose an entire night of business — and dismissed the notion that they would prepare in advance and jeopardize customers’ health.

Yang called for capping delivery fees and making sure restaurants had access to their customer data.

An allegation of sexual assault that arose late last month against Stringer cost him major endorsements. No other candidate took the opportunity to slam Stringer on this during the debate, although four — Wiley, Morales, Garcia and Donovan — have called for him to end his campaign.

Jean Kim, a former lobbyist, accused Stringer of sexual assault and harassment, which she said occurred when she was volunteering on his 2001 public advocate campaign.

Stringer stuck to the message he’s repeated in recent weeks, saying women’s allegations should be taken seriously, but ultimately denying Kim’s. He called for an investigation, but said voters would have to make up their own minds.

“You have no idea how much I want investigation resolution and somebody to listen to the facts,” he said.

The money of deep-pocketed donors and out-of-towners influencing the mayor’s race has been an increasing concern this election season, especially with independent expenditure committees cropping up to support McGuire, Stringer, Donovan and Yang.

Last month, the city’s Campaign Finance Board stalled giving the Donovan campaign public matching funds as it investigated whether a PAC funded primarily by the candidate’s father was violating rules preventing coordination between the groups and campaigns. Stringer’s campaign had complained. The board found no wrongdoing, and Donovan ultimately got nearly $1.5 million worth of funds.

Confronted about whether taking taxpayer dollars to fund his campaign and having a PAC funded by his father’s millions spend on his behalf violated the spirit of the law, Donovan said that voters he met didn’t cite that as a concern. He added that lots of candidates have the support of PACs, noting that Stringer had the backing of many during his comptroller run.

Morales retorted, “Not every candidate.”

Stringer called out, “Don’t get me involved in your daddy’s problems!”

The mayoral primary election will be New York City’s first cityride rodeo using ranked choice voting, a system that allows voters to select up to five candidates on their ballots in order of preference. Runoffs take place until a single candidate comes out on top, with more than 50% of the vote. For each round, candidates with the fewest first-ranked votes are eliminated and their votes then go to their supporters’ second-place choices.

The system, strategists and experts say, should incentivize positive campaigning and alliances in order to capture wide swaths of the electorate and multiple voting blocs — in the hopes they’ll appear on the ballots of their rivals’ supporters.

But judging from their attacks and scuffles during the debate, the Democratic mayoral candidates haven’t seemed to get the message yet. When asked whom they’d rank second on their own ballots, half the candidates declined to answer.

Although one of the four who refused to share a second choice, Garcia picked up two second-place rankings — from McGuire and Yang, who has repeatedly said he’d like to hire her for his own administration (she’s said she’d like him to stop saying that).

As his second pick, Donovan chose Wiley, who in turn chose Morales.

There’s still time for candidates — and voters — to make their choices.

Thursday’s event was the first of three city Campaign Finance Board-sanctioned broadcast debates. Two more are scheduled for June 2 and 16.

Republicans mayoral candidates will appear for the first official broadcast debate on May 26 — but in a blue city, the future mayor is most likely to be one of the contenders in the Democratic scrums.