Are You Pro-Israel? Then We'll Pan Your Books on Feminism - The Jewish Voice

Are You Pro-Israel? Then We’ll Pan Your Books on Feminism 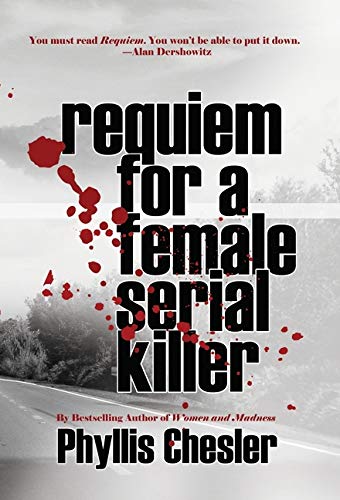 First, I want to thank Julie Bindel for her scathing review of my new book Requiem for a Female Serial Killer. It was far too vitriolic. After picking myself up off the metaphorical floor (in reality, if only I could! But how would I get up?) I began to wonder: Really, what could be going on?

My feminist work, as contained in twenty books, thousands of articles, speeches, campaigns, Speak-Outs, and in my having co-founded feminist organizations that are still standing after fifty years—speak for themselves.

But, like Bindel, who is more than a generation younger than I am, we are both abolitionists in terms of sex slavery, pornography, surrogacy, and transgender issues. Her burning issues have been my burning issues for a very long time. We have both been de-platformed and dis-invited because of our politically incorrect views.

Why would Bindel not find a way to embrace my book which some blessed others have viewed as a “classic,” a “masterpiece,” a version of Uncle Tom’s Cabin in terms of raising consciousness about female sex slavery, and eliciting sympathy for such tormented slaves?

Ah, there is something else that may stand between Bindel and myself, something so important that it may have blinded Bindel. Only a wee bit of digging explained what else might be going on. It could even be unconscious—it sometimes is. Bindel’s review confirms how certain other agendas may cloud a reviewer’s vision; how some Thought Crimes can never be forgiven; how strong differences of opinion about a completely unrelated issue may color a review of a work on another subject entirely.

It is anti-Zionism/Judeophobia which continues to operate as a veiled hand, pretty much everywhere but it’s also always hidden—exactly as the Jews were once described in Megillat (The Scroll of) Esther. Instead of a sister-liberator, a Foremother, actually, Bindel may, first and foremost, only see a Zionist Jew, the worst kind of traitor—a former leftist who has been bitten by reality, and who must therefore be purged from the pure-blooded ranks of feminist abolitionists.

I have been documenting the Palestinianization of Feminism and “Progressivism” for the last forty years. It has deeply saddened and enraged me. Radical feminists have gone along with GroupThink in a way that is frightening. It is a measure of how successful all the anti-Semitic/anti-Zionist campaigns have been—the non-stop anti-Israel resolutions at the UN, the non-stop BDS campaigns, the non-stop Arab funding of American universities, and all the non-stop petitions, letters, demonstrations, campus Apartheid weeks—which have had their way with the herd-like intelligentsia.

Therefore, in all fairness, I cannot present only Bindel as if she alone is a left-thinking anti-Zionist. After all, she swims in a much larger sea filled with other anti-Zionist/Judeophobic true believers.

Even my favored radical abolitionists, who are comfortable working and posing with women in hijab, tend to work and pose primarily with Jewish women but only if they are anti-Judaism, fiercely secular, queer or lesbian, and are, first and foremost, critics of only Israeli policies. Nary a mention of China, Sudan, Afghanistan, Saudi Arabia, or Iran.

My feminists attend ceremonies and gatherings in which they honor Muslim women (and many should be honored), but they rarely congregate with or honor accomplished Israeli women who are judges, lawyers, professors, scientists, and politicians—unless they are known as critics of both Israel and of religious Judaism.

For some time now, feminist organizations have presented programs and plenary sessions against the Israeli “occupation” of disputed territories. They cherish only those who hold such views. Most intersectional feminists swim in a sea in which Linda Sarsour, Rashida Tlaib, Ilhan Omar, and Alexandria Ocasio-Cortex are glamorized and omnipresent and whose views on Israel are genocidal. (“From the river to the sea, Palestine will be free” which is code for: “And there will be no Israel.”) Tlaib just retweeted this refrain but it was quickly disappeared. Screen shots have captured it.

Let me be very clear. Bindel is totally entitled to her views and free speech means she is more than entitled to publish them. The problem for me is when her prejudice on a totally unrelated subject, distorts her vision, unleashes a dangerous aggression, and perhaps allows her to serve as a favored proxy for even more rabid others who may have their own agendas.

I knew very little about Bindel before. Now I’ve begun to check her writings. Here’s what I easily found.

In 2008, in The Guardian, Bindel wrote about attending a haredi wedding in Jerusalem, one she viewed quite negatively. The things she criticized are very similar to the arranged marriages and separate seatings at Muslim/Palestinian Arab weddings, a comparison Bindel did not make. However, she did write this:

“The day after the wedding, Harriet and I go with a political activist to the West Bank to meet Palestinian human rights groups organizing against the apartheid-like conditions in which they are forced to live under punitive Israeli rule. We are both glad to be leaving the country the following day and can’t imagine returning.”

I guess Bindel would not be inclined to support anything written by a defender of Israel. While it is possible that she did not know anything about my 21st century work—somehow, I doubt that.

In 2012, in Standpoint, Bindel described herself as a “leftwing critic of Zionism, of mixed Jewish and Catholic heritage.” Maybe she is one of those who begin their anti-Israeli critiques by saying “I’m a Jew but…;” one of those who care about the 20th century European Shoah, but not so much about the anti-Jewish/anti-Zionist genocidal intentions of Iran, Europe, and Arabs and Muslims in the 21st century.

In 2016, in the International Business Times, Bindel continues the Blood Libel first deployed by The Lancet, in 2014, in which the Israeli so-called “occupation” was deemed responsible for Palestinian male misogyny (forced face veiling, child marriage, wife beating, polygamy, honor killing, etc.) and the consequent misery of Palestinian women and Palestinian gays.

Bindel uses a gay Muslim interviewee in order to credit Muslims for creating the first LGBT organization in the Middle East—but such an organization could only have been, and actually was, founded in Israel proper. Had it been founded in Gaza, Nablus or Ramallah, all the founders would have been tortured and murdered.

Zahava Raymond, at HonestReporting makes this exact point. In her article, Bindel, quoting one Aswat, writes: “By saying that Israel is LGBT friendly, they try to pretend that they are not committing human rights abuses towards us (Palestinians). It is nothing but a PR exercise,’ she said.”

Tell that to all the Arab male homosexuals who have fled the \West Bank\ and Gaza to Israel and received shelter and asylum there.

Amazingly, Bindel is very brief when she describes the Palestinian culture in situ i.e. child marriage and honor killing. However, in terms of honor killings in one city, Lod, Bindel implies that the Israeli police have somehow been remiss in arresting and prosecuting Arab honor killers. She writes:

“In Lod, 38% of the 104 Israeli women reported murdered are Arab, yet the entire Arab population is only 21%. Most Arab women murders remain unsolved.”

As they say: Let’s unpack this. First, is she suggesting that mysterious forces are persecuting and murdering Arab women only? What forces might that be? Why doesn’t she name them? Clearly, it is the Arab fathers, brothers, husbands, cousins, uncles, and even sons of these unlucky women who kill them, often enabled by their mothers, sisters, aunts, and female cousins.

Second, Bindel does not credit Israeli Jews who came to Israel from Arab lands where they had lived for thousands of years, for not honor murdering their women. I wonder why not.

Third, is Bindel really blaming Israel for not stopping, arresting, or abolishing honor killings? Does she not understand that no one in the Israeli Arab Muslim community will talk about an honor killing, no one will tell, because if they do, they, too, will shunned and then tortured-murdered. The Arab terrorists who run life in the disputed territories will punish anyone who talks to the Israeli police, military, media, etc.

Honor killings are crimes of the community and, given all the Hate Propaganda directed at Israeli Jews by Arab Palestinians, the process of education and prosecution proceeds slowly, very slowly—even though the bravest Israeli Arab feminists have demonstrated against honor killings and have worked, secretly, with Israeli Jewish feminists on rescuing Arab girls and women targeted for murder.

Bindel presents Lod as a “divided” city, with greater comfort and safety on the Israeli Jewish side, and far more limitations on the Israeli Arab side. She quotes an Israeli Jewish feminist who believes that “feminism must be part of the struggle to end the Israeli occupation in Palestine…there are structural barriers that prevent Palestinian women from living as equal citizens.”

Bindel provides no context, no mention of the various Intifadas unleashed by Arafat in 2000 and which have continued ever since. Without history, without context, it is as if Israel is, as has been repeated endlessly (not by Bindel) is just a Nazi, Apartheid state and a colonial oppressor.

Quoting another Palestinian feminist activist, Bindel and her interviewee actually blame the absolutely necessary “check points” as the reason Arab men will not allow their women to leave their village for a higher education or for employment since “as a woman she holds the family honour.” Bindel does not critique this justification for Islamic Gender Apartheid.

I must stop here. What Bindel’s distorted view of my new book has allowed me to do is trace the rather transparent and unconscious bias that often exists when reviewing a work by someone who is profoundly sympathetic to Israel. I have run into this many times before and in many ways. And I am far from alone.

In another world, perhaps in a future life-time, Bindel and I might join forces to fight sex slavery. For now, that is quite impossible.

Phyllis Chesler, Ph.D, is an Emerita Professor of Psychology and Women’s Studies at City University of New York. Dr. Chesler is a co-founder of the Association for Women in Psychology (1969), The National Women’s Health Network (1974), and The International Committee for the (Original) Women of the Wall (1989). She is a writing fellow at Middle East Forum and is a Fellow affiliated at both SPME and ISGAP. Dr. Chesler is the author of twenty books, including the landmark feminist classic Women and Madness, The New Anti-Semitism (2003), Woman’s Inhumanity to Woman (2009), An American Bride in Kabul (2013), which won a National Jewish Book Award, A Family Conspiracy: Honor Killing (2018), a Memoir: A Politically Incorrect Feminist (2018), and her forthcoming Requiem for a Female Serial Killer (2020).