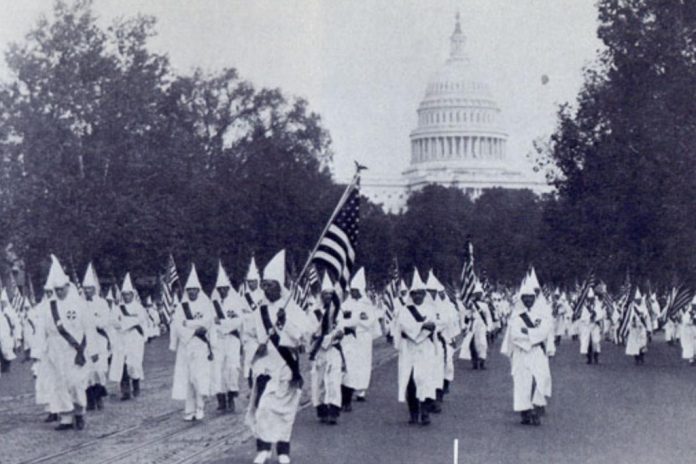 A New York high school teacher is facing heat for handing out an image on the first day of school that compared police officers to slave owners and the Ku Klux Klan.

The Black man is saying “I can’t breathe,” which is what George Floyd, a Black man, said when he was knelt on a by a white police officer in Minneapolis on Memorial Day.

“My daughter showed me the paper. I said, ‘What is this?! You’ve got to be kidding me!'” Westlake mom Ania Paternostro told the New York Post. “This cartoon compares the police to the KKK. It’s an attack on the police.”

“We have to respect the men in blue who protect us,” she said. “We don’t need a teacher brainwashing my kids. I’ll teach my kids about what’s right and what’s wrong.”

Her daughter Nicole said she was disturbed by Moreno’s lesson plan because she thought it was one-sided and anti-police.

“The cartoon was disgusting,” the student said. “It compared the police with all the terrible people in history. It was not fair. It wasn’t right.’”

She said she has been bullied on social media and called a racist for her stance on the lesson.

In a letter to parents, superintendent Kotes said the district will be conducting a “thorough investigation” into “what exactly occurred in this particular classroom and what, if any, action is to be taken under the circumstances to appropriately address the matter.”

“Once the investigation has been completed, we will follow up with the community to the extent necessary and legally appropriate,” he wrote.

“It’s an absolutely a smear of the police,” Steve Kardian, a retired Mt. Pleasant police officer and former New York city Department of Investigations prober, said to the newspaper of the cartoon.

The same cartoon surfaced in a Texas high school in August. Parents at that school also expressed concerns over the cartoon and called for the eighth-grade teacher who handed it out to be fired, the newspaper reports.

He said it “only further widens the gap between police officers and the youth in our community.”

Texas GOP Gov. Gregg Abbott also called for the teacher who assigned the lesson to be fired.

The Texas school district apologized for the cartoon.