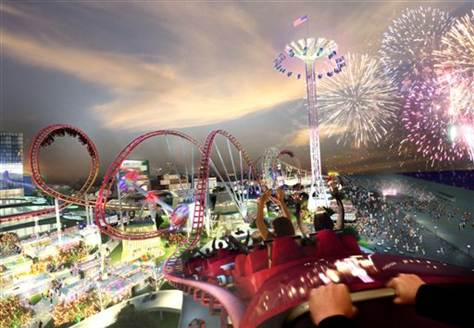 Mayor de Blasio is about to spoil summer for millions of New Yorkers. Coronavirus and an very cautious mayor will combine to make a summer of no beaches, public pools, or parades.

The NY Post reported:  The move was described by de Blasio as equal parts social-distancing precaution and cost-saving measure, sufficient to save the city about $12 million as it stares down a 10-digit budget crunch.

The closing of public pools will leave hundreds and thousands of urban children, many unprivileged sufferings in the heat. The closing of the city’s beaches especially Coney Island will be disastrous for local business in Coney Island, which is already an extremely poor neighborhood.

“Imagine Coney Island in the middle of summer, hundreds of thousands of people packed tightly together,” he said. “I don’t see that happening anytime soon. It’s not safe.”, de Blasio said at a recent press briefing.

Coney Island being closed will undoubtedly destroy the local restaurants and Luna Park. There has been no discussion if Luna Park will be open, considering the strong social distancing laws, the giant amusement park will probably be closed as well. Hundreds of jobs, which mostly are occupied by local minority youth will be lost.

The Post reported that other warm-weather traditions such as the Israeli Day Parade, Puerto Rican Day Parade and Pride March — which would be marking its 50th anniversary this year — were also on the bubble.

“The city is canceling all permitted events in May,” mayoral spokeswoman Olivia Lapeyrolerie said. “We are in the process of reviewing June events and will be engaging with key stakeholders. “A decision on June permitting will be announced later in the week.”

Sources to the NY Post that even events in July and beyond might not take place. This includes the 4th of July fireworks event and Brooklyn’s West Indian Day Parade, which happens during Labor Day in September

“This is not what we’re looking for, but we know we’re gonna do this stage by stage, step by step, and it just reminds us that we have to stick to it”, de Blasio said.

Strangely enough, even as Cuomo is announcing down-ticks in hospital admissions, and ICI patients going down, de Blasio continues to say the exact opposite. De Blasio appears on TV almost daily as a panicked man, with extraordinarily little clue as to what is actually happening in the city, and more intent on starting political spats with the president on MSNBC than actually leading NYC thru this awful time.

One thing for certain de Blasio is overly concerned for New York City’s prison population. “The The jail population is now under 4,000 inmates, ”de Blasio said. “That is the lowest in 74 years, since 1946, the year after World War II ended.”