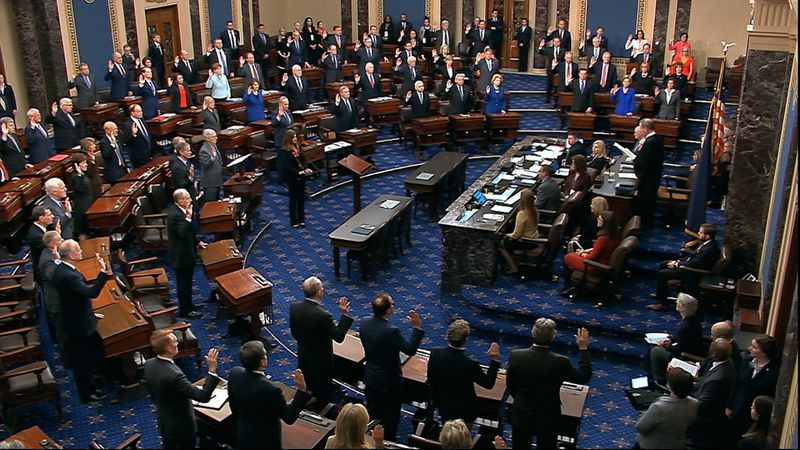 The U.S. Senate overwhelmingly approved a $2 trillion relief package Wednesday night designed to alleviate some of the worst effects of the swift economic downturn currently underway as a result of the coronavirus pandemic, NPR reported.

Ahead of the 96-0 vote, Senate Majority Leader Mitch McConnell (R-Ky.) told lawmakers, “Our nation obviously is going through a kind of crisis that is totally unprecedented in living memory.”

The plan marks the largest rescue package in American history. The legislation covers an array of programs, including direct payments to Americans, an aggressive expansion of unemployment insurance, billions of dollars in aid to large and small businesses and a new wave of significant funding for the health care industry, NPR reported late Wednesday night.

President Trump and top members of his administration gave their strong support to the bill Wednesday.

The White House and Senate leaders of both parties announced agreement early Wednesday morning  on an unprecedented $2 trillion emergency bill to rush sweeping aid to businesses, workers and a health care system slammed by the coronavirus pandemic, AP reported

The urgently needed measure is the largest economic rescue bill in history. It is intended as a weekslong or monthslong patch for an economy spiraling into recession — or worse — and a nation facing a potentially ghastly toll, AP reported

The president had sounded an optimistic tone in his briefing for reporters at the White House on Tuesday evening, though Republicans had been scathing in their criticism of Democrats for blocking Senate passage of a relief bill that had been agreed to by the two parties on Sunday, Breitbart reported the Senate plans to vote later Wednesday on the massive package, which aims to flood the economy with capital by sending $1,200 checks to many Americans, creating a $367 billion loan program for small businesses and setting up a $500 billion fund for industries, cities and states. The House is expected to act in coming days, AP reported

Four conservative Republican senators demanded changes, saying the legislation as written “incentivizes layoffs” and should be altered to ensure employees don’t earn more money if they’re laid off than if they’re working.

Sen. Bernie Sanders of Vermont  said he would block the bill unless the conservatives dropped their objections.

Democratic presidential candidate Joe Biden said the package “goes a long way.” He said it will require strong oversight to ensure the wealthy don’t benefit at the expense of workers and proposed forgiving at least $10,000 of student loan debt as part of the federal response.

Businesses controlled by President Donald Trump and his children would be prohibited from receiving loans or investments from Treasury Department programs included in a $2 trillion stimulus plan agreed to early Wednesday by White House and Senate leaders in response to the coronavirus crisis, according to Geenwich Time. This had been a major contention from the Democrat party.

The provision, which was touted by Senate Minority Leader Chuck Schumer, D-N.Y., in an early-morning letter to colleagues, would also apply to Vice President Mike Pence, members of Congress and heads of federal departments, as well as their children, spouses and in-laws.

During a television interview Wednesday morning, Schumer stressed that the provision applies not only to Trump but to “any major figure in government.”

There are also provisions to ban stock buybacks for the term of government assistance, plus an additional year for any company receiving a government loan from the bill. In addition, it establishes worker protections attached to federal loans for businesses, and it prohibits airlines from using the funds for CEO bonuses, NPR reported.