“While other leaders have abdicated their moral duty to support arriving asylum seekers, New York City refuses to do so,” Mayor Eric Adams preened Thursday.

But the needs of Americans are being shunted aside in the elite’s rush to import more migrants.

“We’re laser-focused on supporting the parents, children, and individuals who deserve compassion and support, and these centers are one piece of our work to do just that,” said Phillip Banks, the deputy mayor for public safety.

Last week, Mr. Adams ordered all agencies to cut their city-funded expenses by 3 percent this year. It typically costs between $135 and $190 per day to house someone in a shelter, and the bill could run into hundreds of millions of dollars. The city has asked the state and federal government for help.

Adams is not opposing the federal delivery of poor foreigners into his stressed city. Instead, he is justifying his spending on migrants as part of the 1950s “Nation of Immigrants” narrative about open borders:

More than 100 years ago, Ellis Island opened its doors to welcome in those ‘yearning to breathe free … Like the generations that came to our city before, New York will provide the thousands now coming to our city with the foundation to build a better life.

In reality, the State of Liberty was built by a French artist to display the success of the U.S. Constitution in the 1880s.  In subsequent years, a PR campaign by pro-migration advocates portrayed it as a beacon to foreign migrants. 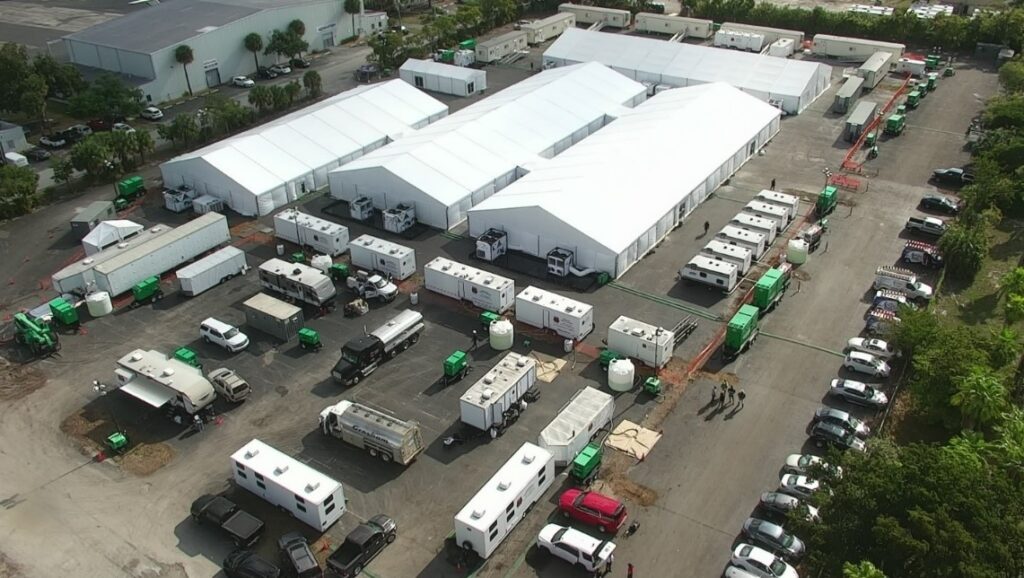 File/A past example of what the outside of a Humanitarian Emergency Response and Relief Center will look like.  (Supplied/NYC)

On September 22, the New York Times reported the inflow of migrants is overwhelming the city’s government-funded shelters:

The population of the city’s main homeless shelter system has been climbing for months at a rate faster than at any time in recent memory. Since mid-May, it has jumped by more than 25 percent, to nearly 58,000. Just in the last week, the shelter population has grown by more than 2,200. In the past, it took years, not months, for such large increases to take place.

The speed of the influx poses such a challenge because the shelter system is not monolithic: It is a collection of over 300 buildings of widely varied use, configuration and condition, the vast majority of them rented from dozens of private landlords and operated by a constellation of dozens of nonprofit groups.

The newspaper did not provide a list of the landlords or their ties to local politicians.

New Yorkers and Biden’s migrants are also competing for housing spaces, including at one 1,000-bed shelter, the New York Post reported on September 19, saying:

“We don’t want them here because, to be honest with you, to me they’re getting treated better than we do, and this is supposed to be ours,” said Darrell Pankey, a homeless resident for six months.

The Democrats’ inflow of migrants is helping to inflate the commercial rents that are paid by ordinary Americans to their landlords.

Democratic politicians prefer to blame the companies that rent to migrants, not the Biden government that delivers the extra renters:

The city’s high rents are actually a positive for the migrants.

In high-rent cities, migrants can earn higher wages — and can then offset those costs by sharing their apartments with many other migrants.

That communal economic strategy is illegal in most cities. But it helps the migrants quickly pay their high-interest smuggling debts and it allows landlords to earn more money from several working migrants than that by renting a small apartment to one American family.

The inflow is good for the many companies that do not want to hire the local Americans who are rejected by other employers. Instead, they can hire desperate migrants who will compliantly work to earn the money needed to pay their smuggling debts.

That incentive to hire migrants undermines the city’s claimed goal of getting young men into jobs. The city’s Daily News reported in February:

On Tuesday, Mayor Adams made a historic announcement, expanding the city’s Summer Youth Employment Program (SYEP) to provide 100,000 jobs to young people in 2022. Joblessness problems are far more acute for young people, particularly Black and Latino youth.
The Community Service Society recently published the results of our 2021 Unheard Third survey of low-income New Yorkers. This showed that 38% of Black respondents reported experiencing temporary or permanent job loss since the onset of the pandemic — a higher share relative to whites and Asians. In fact, almost a quarter of all Black households, and 36% of all low-income Black households, have less than $100 in savings at any time — indicating acute financial precarity, where one unanticipated big expense can have devastating economic consequences for a household.

Biden’s mass migration is also good for employers because holds down wage increases for ordinary Americans. The result is that Americans have to pay higher rents with smaller pay packets.

Employers also can cheat the migrants easier than they can cheat local Americans. On September 8, DocumentedMY.com reported:

On Tuesday, 71-year-old [Colombian migrant] Maria, her sister Luz, and members of New Immigrant Community Empowerment rallied in the shadow of the U.S. Open tennis arena to demand that they receive the wages that were stolen from them. According to NICE, over $4,500 is owed to workers including Maria and Luz, who worked preparing food for the 2021 U.S. Open.

Although the workers were hired by a U.S. Open subcontractor, NICE and the workers are holding the United States Tennis Association ultimately responsible.

The migration to New York City is good for local businesses, including retailers and low-wage employers.

So businesses elsewhere in the want a share of the human-resources wealth that is being extracted from Venzuala, Guatemala, Cuba, and other countries.

Democratic “Sen. Kirsten Gillibrand wants to help solve the Big Apple’s shelter crisis by relocating newly arrived migrants to upstate cities,” said a September 16 report in the New York Post. The transfer would “use the population boost to qualify for pork-barrel federal funds as she seeks reelection,” the report added.