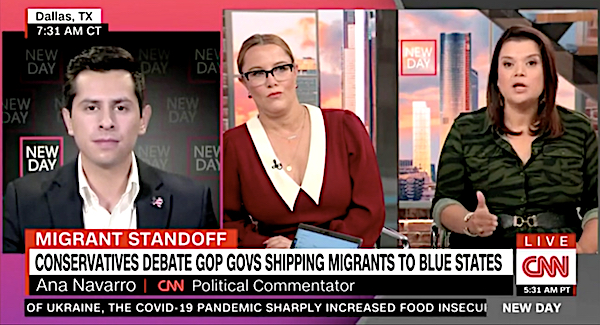 Shaking her head with disgust, Navarro told Abraham Enriquez, “I don’t know how you, as a Mexican-American” can see Florida Gov. Ron DeSantis delivery of 50 migrants to Martha’s Vineyard as anything other than a “political stunt.”

Navarro further told Enriquez, the president and founder of the non-profit Bienvenido, “don’t use your Hispanic last name to come” on the show and make that point.

In the segment on CNN’s “New Day, Enriquez described himself a first- generation Mexican-American who wanted to know why the political left became so upset about the migrants being sent to a wealthy community while ignoring the plight of the largely Hispanic communities near the southern border that are struggling to deal with the record-high number of illegal immigrants.

“We don’t get 50 migrants a day, we get thousands,” said Enriquez.

It’s easy to support open-border policies if you live on the Upper East Side of Manhattan or Malibu, he continued, “but these are our communities” along the border, “and our resources are being strained.”

“All we are asking for is for other states – which, by the way, have sanctuary city laws – to start picking up their way in this crisis we have caused by the lack of attention from our president,” he said.

“Please don’t be so cynical,” she continued. “It’s a little early in the morning. You know damn well that it was much more than that,” calling it a “political stunt.”

“And please don’t use your hispanic last name to come on here and try to, uh, uh, you know, justify this as just offering transportation,” Navarro said.

Given the chance to reply, by anchor John Berman, Enriquez invited Navarro to come to the border and celebrate Hispanic heritage month. If she came, he said, she would see how overwhelmed Border Patrol officials are.

“There are no federal resources that are even trickling down to our border,” he said.

“In order for us to say that flying migrants who were homeless, Ana, who had no food, who had no shelter, to a city, in a sanctuary state, that has more than enough resources is bad, to me that, that, is complicit to what’s going on.

In response, as the segment concluded, Navarro laughed.

Enriquez follow up his appearance on CNN with an interview with Fox News’ Jess Watters.