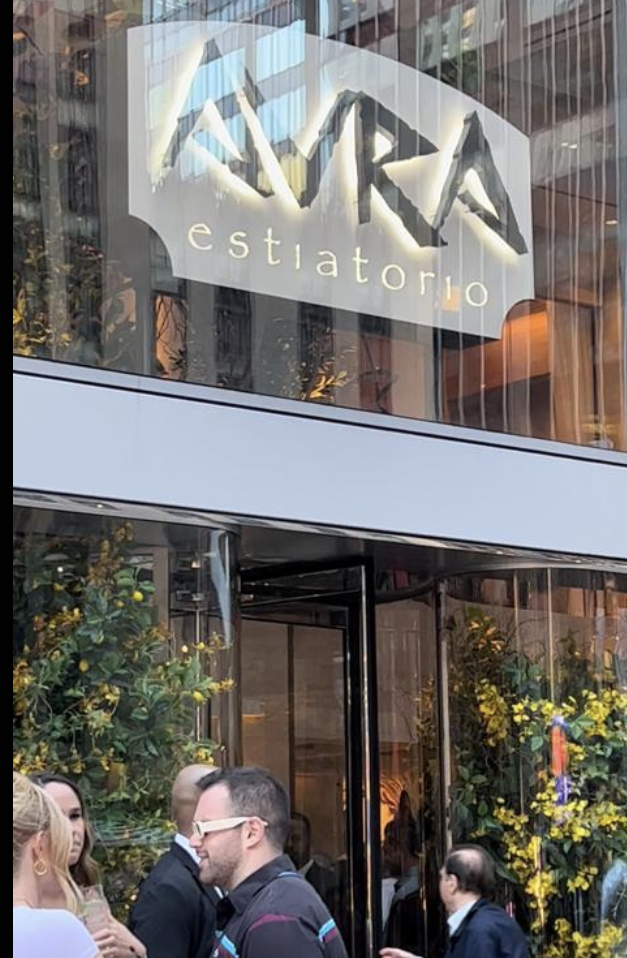 The former Time + Life building has a new massive restaurant to complete its new look.

As reported by the NY Post, the building at 1271 Sixth Avenue, which was redesigned by Rockefeller Group, has finally opened its ground floor Greek restaurant called “Avra.”  On Thursday night, over 2000 invited guests from New York City’s business community gathered at the 48-story skyscraper, which boasts close to 1.4 million square feet of office space to celebrate the upscale Greek restaurant.  Avra was re-clad and reengineered with Rock Group spending roughly $600 million on its 2020 redevelopment.

The tower was still missing one major component however—its main restaurant.  But now the Avra Greek restaurant has officially opened with indoor and outdoor seating for over 400 patrons.  The Avra restaurant is being called the jewel in the crown of Rockefeller Group tower.  This will be Avra Group’s third restaurant in Manhattan.  The group began talks with Rockefeller regarding taking on the space “about six months pre-COVID,” said co-owner Nick Tsoulos, who is partners in the business with Marc Packer and Nick Pashalis.  The company has invested over $10 million on the space, Tsoulos said.

News first broke in February 2020, that Avra would be taking on the multi-level space in the iconic Midtown office building.  The five-star Greek dining restaurant had been searching for a high-profile location, to complement its already successful restaurants at 14 E. 60th St. and at 141 E. 48th St.  “Our broker located the Sixth Avenue space,” Tsoulos recalled. “We had just finished negotiating a lease. We were in the lawyers’ office in February 2020 when Marc said, ‘Let’s talk about the elephant in the room.’”  The elephant, of course, being the COVID-19 pandemic– at the time when the first case had arrived in the Metropolitan area.  “One lawyer said, ‘It will be over in a week.’

We said, ‘What if it isn’t?’” Tsoulos recalled.  “We postponed the signing. The world shut down the next week. Then Rockefeller Group came back to us in August [2020]. We kind of started over again. We put in protective COVID language that worked for them and for us.”  A source for RealtyCheck said the complex deal included a lease and a revenue-sharing formula with the landlord and it came with unique COVID-specific contingencies. “We thought the world was going to come back,” Tsoulos said. “The location is the center of the universe. Our landlord was very helpful to us. They helped us through the construction process and the whole ordeal.”

Overall, the pandemic and other drama led to extensive delays, and the space remained vacant for these past two years.  As per the Post, the space that saw its grand opening on Thursday evening  is a sight for sore eyes.  The sun-drenched three-floor restaurant boasts thirty-foot-high windows, fronting the avenue, as well as outdoor plaza seating.  The restaurant is situated directly across Radio City Music Hall.  “We are open for business,” Tsoulos said, “And the butterflies are still there.”