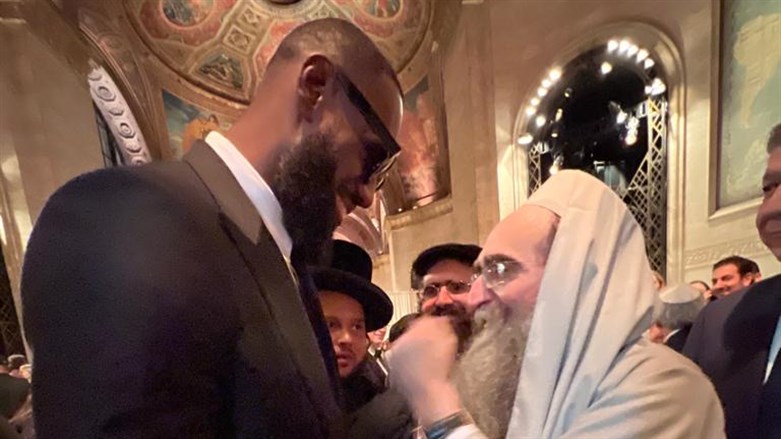 Joyous cries of “Mazel Tov!” could be heard at the upscale Manhattan venue, Cipriani’s, on Sunday afternoon as Jeffrey Schottenstein and Ariella Boker became husband and wife at their lavish nuptials. The groom is the son of billionaire philanthropist Jay Schottenstein.

Jay Schottenstein, 67, is also the man behind the magnanimous sponsorship of the Artscroll series of seforim with English translations. Born in 1954 in Columbus. Ohio, Schottenstein is the Chairman and CEO of Schottenstein Stores Corporation, American Eagle Outfitters, and American Signature. He is also the Executive Chairman of Designer Brands and the founder of the TACKMA clothing brand.

Schottenstein became chairman of American Eagle Outfitters in 1992 and held the position of CEO from 1992 to 2002, and since December 2015. In 1993, after his father’s death, he replaced his father as head of Schottenstein Stores Corporation. Since 2005, he has served as chairman of DSW. 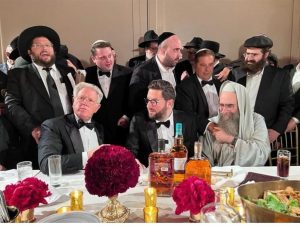 Because of his fervent wish to bring the Talmud and other liturgical works to those without knowledge of Hebrew or Aramaic and those who did not have the benefit of a yeshiva education, Schottenstein made it his business to sponsor the production of a Talmud, Mishnayos, etc with the expert assistance of the Artscroll staff.

The father of the groom is most renowned as a highly esteemed philanthropist who has gladly donated vastly significant sums to a panoply of exceptionally worthy Jewish organizations and charitable causes.

Always on the front line for Jewish causes, the senior Schottenstein has developed a stellar reputation for his exceptional generosity and kindness.

On Sunday, however, his son and new daughter-in-law took center stage at their top shelf wedding in the heart of Manhattan.

Previously, the Jewish Voice reported on the engagement of Jeffrey Schottenstein and Ariella Boker. On March 6th of this year, Jeffrey Schottenstein, 39, proposed to his future bride on a lovely Sunday afternoon in a well-staged event that took place in the crossroads of the world; better known as Times Square.

The new Mrs. Jeffrey Schottenstein is Ariella Boker and her sister is married to renowned philanthropist Eli Gindi of the former Century 21 Store retail chain.

The younger Schottenstein popped the question to his intended on the American Eagle billboard in front of thousands of tourists. The billboard in Times Square, showed delightful pictures of the couple, with a question above it that read: “Ariella, Will You Marry Me?” Jeffrey had made the arrangements in advance as a surprise to the woman who will became his wife and soul mate for life.

Subsequent to Jeffrey’s proposal to Ariella in March, the two joined Eli & Michal Gindi at their home in Brooklyn for drinks where they were joined by other relatives and friends.

Chaim and Devorah Boker (the parents of Ariella) are active members of the Brooklyn Sephardic Jewish Community. After their marriage in Israel in 1975, they arrived in New York for what has now become a 42 year honeymoon. They are both prominent and outspoken members of the community, always standing up for just causes and retaining strong ties to their remaining family in Israel. Their home is known for its open door to visiting rabbis and for the aroma of Devorah’s mouthwatering Shabbat food. Including Ariella, the Bokers have five daughters.

Mr.& Mrs. Boker are always eager in participate in the various tzedakah organizations that they represent. Their generosity and willingness to help others less fortunate has become their hallmark.

Mr. Jeffrey Schottenstein is the founder and CEO of the TACKMA sportswear brand and Chief Investment Officer at SEI Inc.

Jay Schottenstein and his wife Jeanie have five children. Besides Jeffrey, they are parents to sons, Joey and Jonathan, and daughters Lindsay and Nicole.

Jeffrey & Ariella plan to divide their time between New York City and Florida.

According to published reports, the highlight of the wedding was the appearance of NBA superstar LeBron James, who was among the guests.  A report on the Jewish Insider web site indicated that the Schottenstein family has long been acquainted with James, an Akron native who brought the Cleveland Cavaliers their first NBA championship in 2016.

A video that has gone viral, along with photos show the 6-foot-9 James, 37, entering the wedding venue with Rabbi Yoshiyahu Yosef Pinto, a Moroccan-based rabbi and founder of Shuva Israel, as was reported by Jewish Insider.

The report said that Rabbi Pinto, who counts the Schottenstein family among his followers, has reportedly offered spiritual advice to James in the past. James also reportedly gave a six-figure donation to Shuva Israel.

The JTA reported that James has also been a fan of Jeffrey Schottenstein’s apparel brand TACKMA, which stands for “They All Can Kiss My Ass” and has been worn by stars across entertainment industries.

James is a four-time NBA champion and MVP.