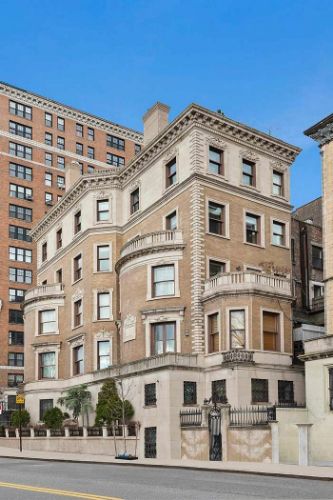 An extravagant seven-floor mansion in Manhattan’s Upper West Side has hit the market.

As reported by the NY Post, the eight-bedroom home, at 25 Riverside Drive and 75th Street, is for sale asking a whopping $65 million.  The home spans 12,000 square feet, features a glass conservatory, a garden with pear trees, and an oversized terrace which can seat 100 dinner guests.   The previous owner might scare off some buyers though.  The palatial mansion is being sold by a trust benefitting Dina Wein Reis, a society scammer notoriously known as the “$100 million woman”, who moved directly from the mansion to jail.  Wein Reis and her husband David Reis (formerly Ruiz) purchased the townhouse in 1996 for $2.15 million.

Though the home has a high price tag, the size and amenities present a rare find in NYC real estate.  “The magnificent home is truly a commanding presence anchoring the southern end of Riverside Drive, and the Beaux-Arts style blends in perfectly with the best of the Upper West Side. The pricing is rich, but it only takes one buyer who wants this size and scale to call home,” said top broker Dolly Lenz.

The 34-foot-wide townhouse boasts three exposures allowing for views from the Hudson River to Riverside Park. The home has 12- to 14-foot ceilings, 70 “oversized and curved” windows, six fireplaces, three kitchens an elevator and outdoor terraces on four of the seven floors, as per the listing. The 19th-century home was built by C.P.H. Gilbert. Original details include coffered cork-lined ceilings on the “entertaining” floor and Tiffany and La Farge stained glass doors for the fourth-floor study.  Added amenities include a gym, wine cellar, home office, and mahogany theater. It is being listed by Sotheby’s Elizabeth Sample and Brenda Powers.

Wein Reis, 58, pleaded guilty in 2011 to one count of intent to commit fraud after being charged in 2006 on six counts spanning 15-years of illegal business activities. Wein Reis was accused of entertaining Fortune 500 company CEOs at the posh brownstone pretending to search for a new top executive. The CEOs were asked to give discounted goods and samples to get their products into a retail network.  She allegedly then turned around and sold the goods at wholesale prices. As per the Post, the scam allegedly netted her $100 million, as well as a $35 million art collection and six homes.  She was released from jail in 2014 and ordered to pay $7 million in restitution plus $1 million in fines.