Miami Real Estate continues to heat up as both residential and commercial properties skyrocket. It was recently announced the Wharf Miami would spend $185 million to transform into “Wharf Riverside”- a complex comprising a 165-room Dream Hotel, an event hall, a nightclub and restaurants. This two tower development slated to be completed in 2025, will transform Miami into an entertainment mecca while retaining the development’s lustrous river views. Within the past month alone at least ten major development deals have transpired in Miami, including Mast Capital recently paying $103 million for land at 1420 South Miami Avenue in Brickell with hopes of building 1,250 new residential units.

The formerly sleepy Brickell has taken off with a bang. For the first time in over ten years Brickell’s financial district entitled the “Wall Street of the South” is building a standalone $300 million office building at 830 Brickell Plaza that will cater to corporate, creative and technology clients. This 55 story Class A tower is being developed by Cain International and OKO Group. Blackstone, Microsoft, Icahn Enterprises, Marathon Asset Management, Balyasny Asset Management, Hidden Lake Asset Management, Hagerty Garage, Thoma Bravo Equity and Social and Nucleus Research are a few of the companies setting up offices in Miami. Ubiquitous cranes adorn Miami streets as more than 21 major office and residential towers were under construction in 2021-the actual number is probably triple.

The tallest all residential Miami building “Aston Martin Residences” with 66 floors at 300 Biscayne Boulevard Way will be completed in 2022 with 391 units designed by architectural giants Revuelta and Bodas Miani Anger. More than 75 percent sold, this super hot property boasts a superyacht marina, virtual golf course, two movie theaters, a barbershop, art gallery, private dining room, infinity pool, and sky bar lounge. Of the 7 penthouses being offered, two have already sold at a price range of $16.7 million to $25 million for over 8,800 square feet of space. These stratospheric prices were previously unheard of in inland Miami. The crowning glory of this extraordinary edifice is the still unsold $50 million 27,000 square foot triplex penthouse which comes with an Aston Martin Vulcan supercar.

Related Group has become a dominant Miami player purchasing a mixed use luxury condo project at 444 Brickell Avenue that will be managed by Baccarat Hotel. “The Bacarrat Hotel and Residences” will be available in the second quarter of 2024. The three towers comprising 57, 77 and 82 stories will contain office, retail and hotel components. Related is the largest condo developer in Miami and continues its frenzied pace of snatching up available properties.

Another company on a Miami buying spree is Los Angeles based Black Lion Investment Group which recently purchased its fourth Miami Dade retail site in 6 months for $19 million. Located at 801 South Pointe Drive they paid $995 per square foot for 19,100 square feet of retail-these astronomical sums were previously unheard of. However, South of 5th Street in Miami continues to prove it is the future of Miami as dozens of restaurateurs and businesses set up shop.

It appears that all of Florida is “hot hot hot” as Fort Lauderdale has a condo project at 808 Southeast 4th Residences that was recently approved and Tampa Bay saw the biggest rent hikes in the US this year (more than 24 percent). Lest you forget about individual properties, this year $10 million plus home sales were up 158 percent in Miami-Dade, Broward and Palm Beach Counties. Dec 2020 to November 2021 saw sales volume of $6.9 billion comprising more than 394 sales of $10 million or above homes. Sales are up 4 times and 290 percent as compared to pre-pandemic prices. 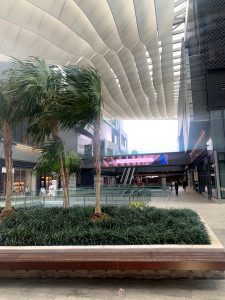 It is undeniable that the exploding Florida market is attributable to the Covid disaster. People have come to the realization that remote working is a possibility, and no longer want to be huddled indoors in New York during the brutal winter months. Moreover, the lack of a Florida State Income Tax and Florida’s “business as usual” approach has made it irresistible to the masses. Sitting in the bustling Fontainebleau lobby the other night I bumped into a gentleman from Dubai whose first time in Miami had him longing for more. The Fontainebleau boasts the best lobby in Miami with its Bleau bar and Liv club attracting hordes to this iconic venue. Omar’s excitement was palpable as he exclaimed, “if this is a typical night in Miami, I ain’t ever going back to Dubai.”