Why are some Jews defending the IRGC?

An uncompromising foe of apartheid — South Africa’s brutal regime of oppression against the Black majority — Tutu worked tirelessly, though non-violently, for its downfall.

The buoyant, blunt-spoken clergyman used his pulpit as the first Black bishop of Johannesburg and later Archbishop of Cape Town as well as frequent public demonstrations to galvanize public opinion against racial inequity both at home and globally. 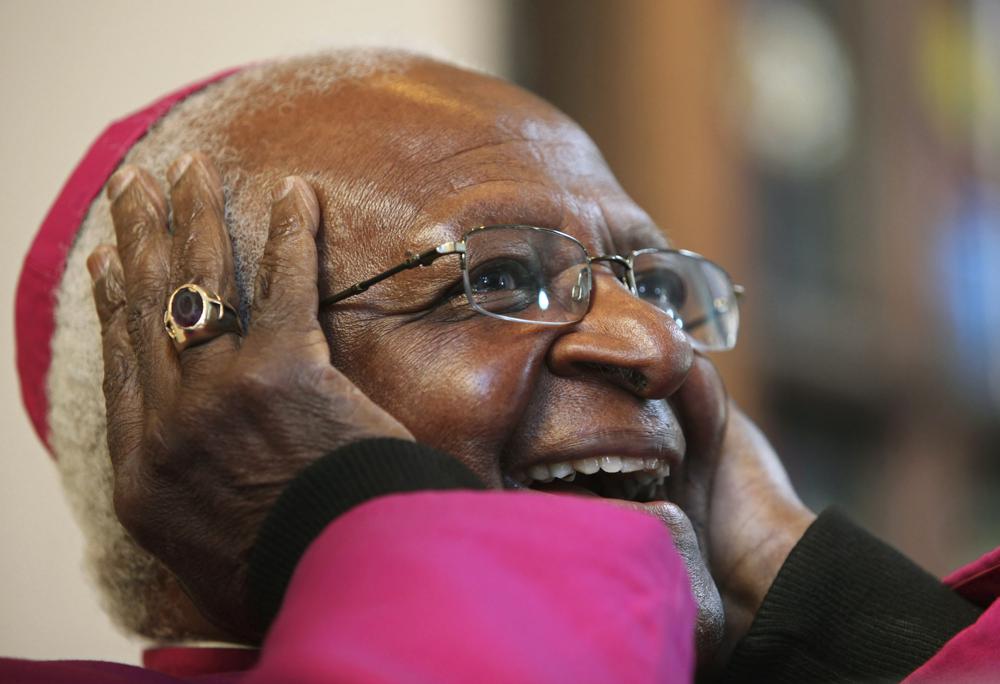 Tutu’s death on Sunday “is another chapter of bereavement in our nation’s farewell to a generation of outstanding South Africans who have bequeathed us a liberated South Africa,” Ramaphosa said in a statement.

“From the pavements of resistance in South Africa to the pulpits of the world’s great cathedrals and places of worship, and the prestigious setting of the Nobel Peace Prize ceremony, the Arch distinguished himself as a non-sectarian, inclusive champion of universal human rights.”

Tutu had been hospitalized several times since 2015, after being diagnosed with prostate cancer in 1997.

“Typically he turned his own misfortune into a teaching opportunity to raise awareness and reduce the suffering of others,” said the Tutu trust’s statement. “He wanted the world to know that he had prostate cancer, and that the sooner it is detected the better the chance of managing it.”

In recent years he and his wife, Leah, lived in a retirement community outside Cape Town.

Throughout the 1980s — when South Africa was gripped by anti-apartheid violence and a state of emergency giving police and the military sweeping powers — Tutu was one of the most prominent Blacks able to speak out against abuses.

A lively wit lightened Tutu’s hard-hitting messages and warmed otherwise grim protests, funerals and marches. Short, plucky, tenacious, he was a formidable force, and apartheid leaders learned not to discount his canny talent for quoting apt scriptures to harness righteous support for change.

The Nobel Peace Prize in 1984 highlighted his stature as one of the world’s most effective champions for human rights, a responsibility he took seriously for the rest of his life.

With the end of apartheid and South Africa’s first democratic elections in 1994, Tutu celebrated the country’s multi-racial society, calling it a “rainbow nation,” a phrase that captured the heady optimism of the moment.

Nicknamed “the Arch,” Tutu was diminutive, with an impish sense of humor, but became a towering figure in his nation’s history, comparable to fellow Nobel laureate Nelson Mandela, a prisoner during white rule who became South Africa’s first Black president. Tutu and Mandela shared a commitment to building a better, more equal South Africa. 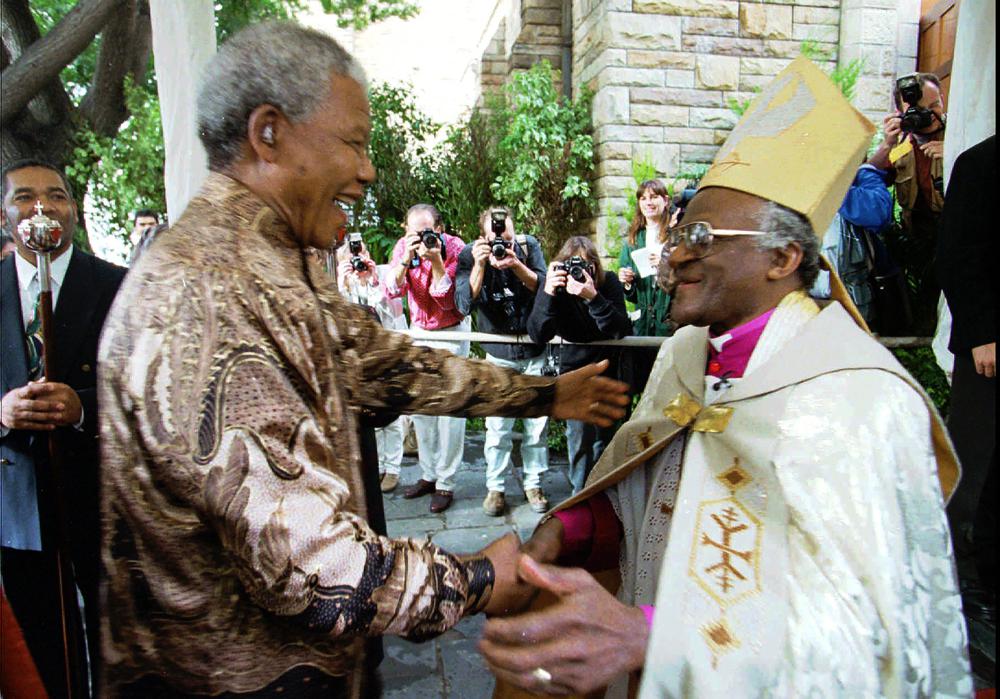 In 1990, after 27 years in prison, Mandela spent his first night of freedom at Tutu’s residence in Cape Town. Later, Mandela called Tutu “the people’s archbishop.”

Upon becoming president in 1994, Mandela appointed Tutu to be chairman of the Truth and Reconciliation Commission, which uncovered the abuses of the apartheid system.

“I would not worship a God who is homophobic and that is how deeply I feel about this,” he said in 2013, launching a campaign for LGBT rights in Cape Town. “I would refuse to go to a homophobic heaven. No, I would say, ‘Sorry, I would much rather go to the other place.’”

Tutu said he was “as passionate about this campaign (for LGBT rights) as I ever was about apartheid. For me, it is at the same level.” He was one of the most prominent religious leaders to advocate LGBT rights. Tutu’s very public stance for LGBT rights put him at odds with many in South Africa and across the continent as well as within the Anglican church.

South Africa, Tutu said, was a “rainbow” nation of promise for racial reconciliation and equality, even though he grew disillusioned with the African National Congress, the anti-apartheid movement that became the ruling party in 1994 elections. His outspoken remarks long after apartheid sometimes angered partisans who accused him of being biased or out of touch.

Tutu was particularly incensed by the South African government’s refusal to grant a visa to the Dalai Lama, preventing the Tibetan spiritual leader from attending Tutu’s 80th birthday celebration as well as a planned gathering of Nobel laureates in Cape Town. South Africa rejected Tutu’s accusations that it was bowing to pressure from China, a major trading partner. 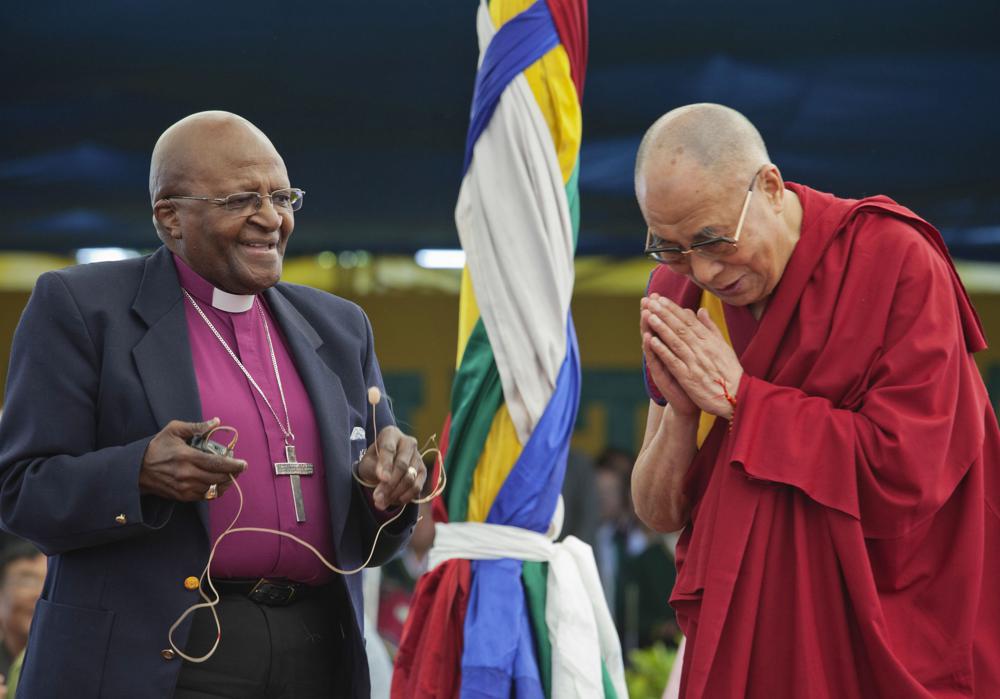 Tutu with the Dalai Lama at the Tibetan Children’s Village School in Dharmsala, India, in April 2015. (AP Photo/Ashwini Bhatia, File)

Early in 2016, Tutu defended the reconciliation policy that ended white minority rule amid increasing frustration among some South Africans who felt they had not seen the expected economic opportunities and other benefits since apartheid ended. Tutu had chaired the Truth and Reconciliation Commission that investigated atrocities under apartheid and granted amnesty to some perpetrators, but some people believe more former white officials should have been prosecuted.

Desmond Mpilo Tutu was born Oct. 7, 1931, in Klerksdorp, west of Johannesburg, and became a teacher before entering St. Peter’s Theological College in Rosetenville in 1958 for training as a priest. He was ordained in 1961 and six years later became chaplain at the University of Fort Hare. Moves to the tiny southern African kingdom of Lesotho and to Britain followed, with Tutu returning home in 1975. He became bishop of Lesotho, chairman of the South African Council of Churches and, in 1985 the first Black Anglican bishop of Johannesburg and then in 1986, the first Black archbishop of Cape Town. He ordained women priests and promoted gay priests.

Tutu was arrested in 1980 for taking part in a protest and later had his passport confiscated for the first time. He got it back for trips to the United States and Europe, where he held talks with the U.N. secretary-general, the pope and other church leaders.

Tutu called for international sanctions against South Africa and talks to end the conflict.

Tutu often conducted funeral services after the massacres that marked the negotiating period of 1990-1994. He railed against black-on-black political violence, asking crowds, “Why are we doing this to ourselves?” In one powerful moment, Tutu defused the rage of thousands of mourners in a township soccer stadium after the Boipatong massacre of 42 people in 1992, leading the crowd in chants proclaiming their love of God and themselves.

After Mandela became president in 1994, he asked Tutu to head the truth commission to promote racial reconciliation. The panel listened to harrowing testimony about torture, killings and other atrocities during apartheid. At some hearings, Tutu wept openly.

“Without forgiveness, there is no future,” he said at the time. The commission’s 1998 report lay most of the blame on the forces of apartheid, but also found the African National Congress guilty of human rights violations. The ANC sued to block the document’s release, earning a rebuke from Tutu. “I didn’t struggle in order to remove one set of those who thought they were tin gods to replace them with others who are tempted to think they are,” Tutu said. 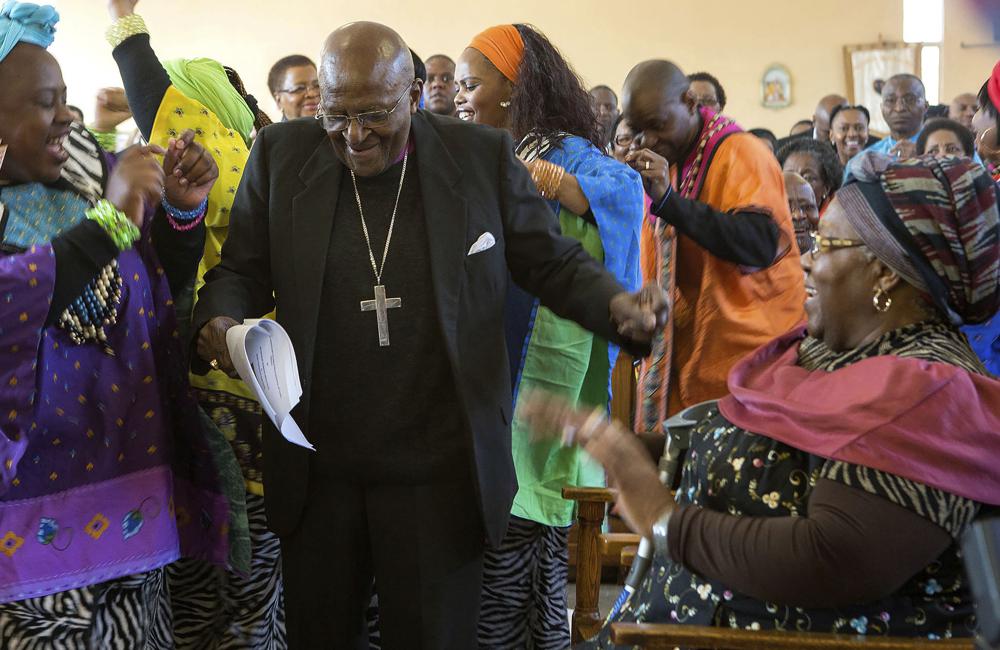 Tutu breaks into dance after renewing his wedding vows to his wife of 60 years, Leah, right. (AP Photo, File)

In July 2015, Tutu renewed his 1955 wedding vows with wife Leah. The Tutus’ four children and other relatives surrounded the elderly couple in a church ceremony. “You can see that we followed the biblical injunction: We multiplied and we’re fruitful,” Tutu told the congregation. “But all of us here want to say thank you … We knew that without you, we are nothing.”

Tutu is survived by his wife of 66 years and their four children.

Asked once how he wanted to be remembered, he told The Associated Press: “He loved. He laughed. He cried. He was forgiven. He forgave. Greatly privileged.”