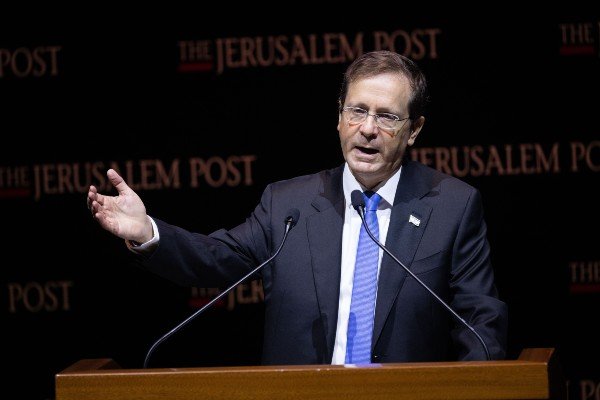 Iran is exploiting the world’s inaction and the lack of coordination between the countries, “a clear threat to international peace and security,” Israeli President Isaac Herzog warned.

Herzog addressed the Jerusalem Post 10th Annual Conference at the Museum of Tolerance in Jerusalem on Tuesday and condemned Iran’s regional aggression as a result of a breakdown of international dialogue.

“Here, we see the world’s failure to act in concert, to settle on a strategy to sever Iran’s tentacles in the Middle East, to restrain its ballistic missile program, and to shut down its nuclear program. Iran is exploiting this inaction, this lack of coordination: a clear threat to international peace and security,” said Herzog.

Meeting with German Chancellor Angela Merkel in Jerusalem on Sunday, Prime Minister Naftali Bennett warned that Iran’s nuclear program has “reached a stage that requires leadership. Acceptance with the transformation of Iran into a nuclear threshold country will be a moral stain on the free world, and even more so – will threaten world peace.”

“We see how the Iranians are behaving right now, even without a nuclear umbrella, in Syria, Iraq, Lebanon, Yemen, Gaza and the Gulf. One can only imagine the extent of the damage they would cause if the world knew that behind this bullying was also a nuclear bomb,” he noted.

“There is no point in trying to appease the Iranians, they interpret conciliation as a weakness. They continue to thrive in the international community, buying time and constantly advancing uranium enrichment, and destabilizing the region. This is a critical point, and Germany’s position is particularly important,” he said.

Germany, one of the signatories on the 2015 agreement with Iran, has sought a path of discourse with Tehran, while Israel has warned that such an approach will enable the Islamic Republic to develop nuclear weapons.

Foreign Minister Yair Lapid departed for a diplomatic visit to Washington on Monday night where he met with Vice President Kamala Harris, Secretary of State Antony Blinken, National Security Advisor Jake Sullivan and leaders from both parties in Congress as the US seek to reengage Iran in talks on its nuclear program.

Blinken will meet with Lapid and Sheikh Abdullah bin Zayed bin Sultan Al Nahyan, the United Arab Emirates (UAE) Foreign Minister, to discuss “accomplishments since the signing of the Abraham Accords and other important issues.” (TPS)