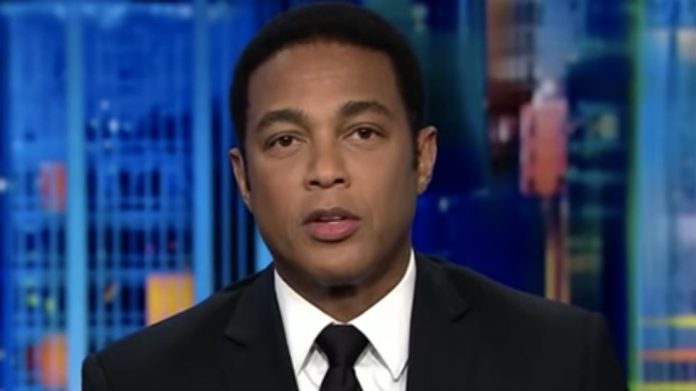 CNN host Don Lemon during his Wednesday prime time segment urged Americans to start “shaming” and shunning “stupid” unvaccinated people. He told CNN co-host Chris Cuomo that society must leave the unvaccinated “behind” as they are ultimately “harmful to the greater good.”

Don Lemon’s evening CNN broadcast on average has less than 400,000 viewers, it is amazing he still has a job.

Lemon suggested that people are fine not knowing what’s in Botox injections, so they should be unconcerned with what’s in the vaccine and ‘trust’ the science. He also implied that all of the ‘vaccine hesitant’ are Trump supporters, and appeared to blame the former president for people currently refusing the vaccine.

“I think we have to stop coddling people when it comes to… the vaccines, saying ‘Oh you can’t shame them. You can’t call them stupid,’” Lemon began the discussion.

“Yes, they are. The people who aided and abetted Trump are stupid because they believed his big lie,” Lemon argued. Then the anchor, who has been accused of sexually harassing another man, stated: “The people who are not getting vaccines who are believing the lies on the internet instead of science, it’s time to start shaming them or leave them behind.”

President Trump has repeatedly encouraged the vaccines and has bragged that the vaccine was funded and created during his term in office, if people are listening to Trump, they would have taken the vaccine!

Not a word of what he said is empirically true. Many vaccine-hesitant work in the medical field and have refused the vaccine because they already have the COVID antibody from previously being sick with the virus. Don Lemon thinks they are stupid people.

A sizable amount of vaccine-hesitant are also Black Americans who are often distrustful of the government mainly because of the Tuskegee experiment, where poor Blacks were injected with syphilis.  Don Lemon, thinks they are stupid people.

And as far as his deranged comparison about Boox…….

There are no studies that prove that individuals who use Botox are the same people who are vaccine-hesitant.  Lemon is also incorrect as to Botox itself, there is no secret about what Botox is   A 2-second google search will produce what a Botox shot is made of. Botox is an injectable drug made from botulinum toxin type A.  Don Lemon thinks his audience is incapable of using google and understanding Botox.

Essentially Don Lemon is pushing, misinformation about the unvaccinated, in an effort to divide the public.

Instead of actually perhaps interviewing individuals to learn why they are hesitant, he is creating stereotypes and creating a fantasy world.

He wants to “leave behind”  Americans,  who are refusing the vaccine for a myriad of reasons, from medical reasons, religious reasons, and those who already had the virus.

In Lemon’s world, the unvaccinated are a bunch of Botox using Trump supporters!

Medical conditions do not exist in this dangerous propagandist’s world.

For example individuals with a ventricular septal defect (VSD), a hole in the heart,  a common heart defect that’s present at birth, who have not been operated on, are not recommended to take an mRNA vaccine.

In Lemon’s world, those who medically can not take a vaccine are “stupid people”.

I just listed two medical conditions off the top of my head, there are many more conditions one could suffer from, which would prevent them from being vaccinated.

Don Lemon does not want you to understand this, he wants you to hate your fellow Americans and “leave them behind”.

It is time we leave intellectually dishonest, purveyors of hate like Don Lemon behind. You have the power, it’s called the remote control.

Below is the clip of Lemon and Cuomo, disseminating hate, catapulting lies, and insulting the public

CNN’s @DonLemon: Like Trump voters, we should call unvaxxed Americans “stupid” and “start shaming them”

“Or leave them behind. Because they’re keeping the majority of Americans behind.” pic.twitter.com/6Ga4oQ7kic