A study entitled   “Preliminary Findings of mRNA Covid-19 Vaccine Safety in Pregnant Persons(LINK to abstract) was published by the New England Journal of Medicine.

From abstract “From December 14, 2020, to February 28, 2021, we used data from the “v-safe after vaccination health checker” surveillance system, the v-safe pregnancy registry, and the Vaccine Adverse Event Reporting System (VAERS) to characterize the initial safety of mRNA Covid-19 vaccines in pregnant persons.

However, upon examining the details within the report:

Knowing this;  the abstract’s statement that the numbers are similar to studies done before the pandemic is not exactly correct because there is an 82% rate of spontaneous abortions among these pregnant women who were vaccinated in the first 2 trimesters (less than 20 weeks), this is quite different than 104 out of 827.

The table below specifically states spontaneous abortion occurred 104 times to women pregnant 20 weeks or less.  The percentage of 12.6% is misleading, as it seems most of the miscarriages occurred in a group of 127 women (104 out of 115 in total spontaneous abortions)

91% of the total reported spontaneous abortions documented in the study occurred in women who had the vaccine early in their pregnancy. 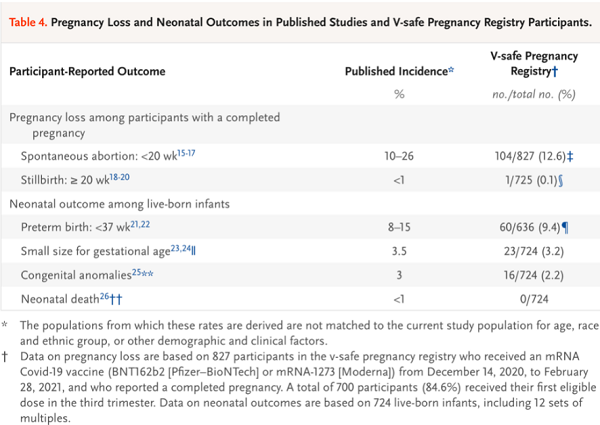