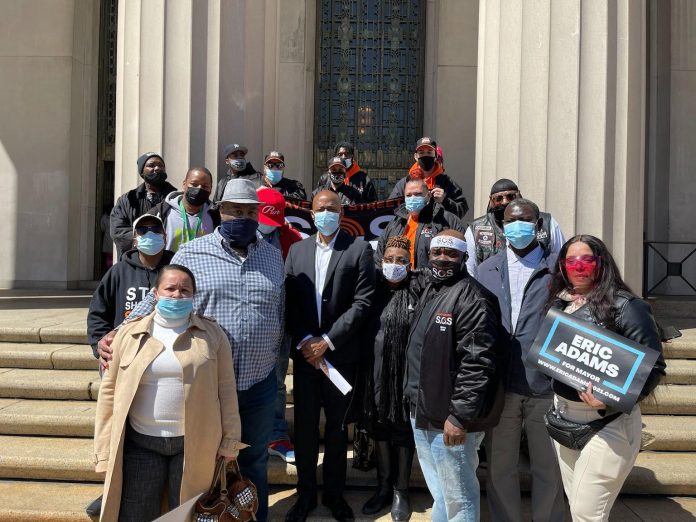 (TJVNEWS.COM)Mayoral candidate Eric Adams took to Bronx Courthouse with local leaders in the anti-gun violence movement; SOS (Save Our Streets), Harlem Mothers Save, and National Community Peace Building Commission, and pushed his plan to reduce shootings and crime in New York City following a bloody week of shootings and a huge overall spike in violent crime this year.

“We will not go backward on crime. We fought too hard and lost too many to go back. We need a plan and we need action,” Borough President Adams said. “Today I am putting forward my crime plan for New York City because our city faces an unprecedented crisis that threatens to undo the progress we have made against crime. As a police officer who patrolled the streets in a bulletproof vest and as an organizer who has fought for anti-violence resources four our communities of color for decades, I will not stand by and watch lawlessness spread through our city, infecting our neighborhoods with the same terrible swiftness of COVID-19.”

Adams’ plan to reduce crime includes: reinventing the anti-crime unit as an anti-gun unit; fully funding the City’s Crisis Management System; allowing for more centralized coordination between law enforcement, community groups and hospitals; and improving communication and coordination between CMS and NYPD to prevent retaliatory violence once a shooting has occurred.

Adams would also change NYPD structure to have cops focus on police work and not clerical duties and other jobs that can be filled by civilians, freeing up budget to go toward the anti-violence groups that are critical work on the ground to keep communities of color safe.

“Talk is cheap. In two months we will have a leader who will decide who lives and who dies. This election is about public safety. The only thing we need from our next mayor is someone who has been there and done that and understands how to save lives. Guess who was there in the 80’s and 90’s? Eric Adams. Guess who understands where we are, where we are coming from and where we need to go? Eric Adams.” said Sheikh Musa Drammeh of National Community Peace Building Commision.

You can read the entire Adams’ Agenda to Reduce Crime here.

“By saving money through technology and efficiency, and using it to fund targeted initiatives that reduce serious crime, I will more effectively deploy resources while ensuring that police do the real police work needed to get the bad guys and prevent crime in the first place,” Adams said.

In just the last few days, the city has experienced a high number of horrific street shootings that have led to deaths and serious injuries. This follows a bloody previous week in which shooting incidents were up 257% from the same time last year, and a month of March in which the city saw a 73% increase in shooting victims from March 2020. Overall, there has been an approximately 50% increase in the number of shooting incidents and victims in New York this year so far compared to last year.