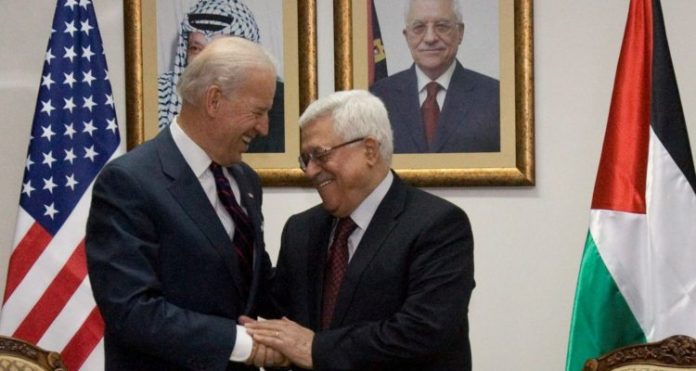 The Biden Administration is resuming financial aid to the Palestinian Authority despite the failure of government agencies to vet funding to ensure it complies with U.S. anti-terrorism laws, the Associated Press reported Wednesday.

Since coming into office in January, the Biden Administration has allocated a total of $130 million in aid for the Palestinians – the first American aid since the Palestinians announced in December 2018 that they were turning down any American funding because they did not want to comply with the Anti-Terrorism Clarification Act that was signed into law in 2018.

The newly allocated $40 million for Palestinian security services is in addition to $75 million revealed last week for infrastructure and other projects along with $15 million for “humanitarian” purposes.

The new Biden Administration funding to the Palestinians is also problematic in light of a General Accounting Office (GAO) report released last week. It found that U.S. government agencies which distributed hundreds of millions of American tax dollars to the Palestinians had not properly vetted all the recipients to ensure they were in compliance with the U.S. anti-terrorism laws.

The non-partisan GAO concluded that the U.S. Agency for International Development (USAID) “did not ensure that awards these entities made to others, known as subawards, were compliant with anti-terrorism requirements.”

“If funding resumes, we recommend measures to improve compliance,” the GAO stated. However, the State Department has so far released no details of how the renewed funding to the Palestinians is being monitored.

The new aid is also questionable under other U.S. anti-terrorism laws that were approved when Biden was a senator, Middle East analysts noted in an op-ed published by The Hill.

“While the Biden administration has not acknowledged it yet, congressionally imposed restrictions that President Biden himself helped author as a senator may complicate his administration’s efforts to restore diplomatic contacts,” noted Jonathan Shanzer and Matthew Zweig of the Foundation for Defense of Democracies, adding that “the provision of financial aid may be even more complicated.”

Current indications are that the Palestinian elections could very well result in “a power-sharing agreement that brings Hamas or other terrorist entities into a government with Fatah,” Shanzer and Zweig noted. “The State Department and the White House continue to remain silent — risking an outcome similar to that of the ill-fated elections of 2006.”

The latest American funding appears to be in violation of other U.S. laws, including the Taylor Force Act that withholds tax money unless the Palestinian Authority ceases its policy of paying cash rewards to convicted terrorists, and the Anti-Terrorism Clarification Act (ATCA) that allows Americans to use the U.S. justice system to sue anybody who received American foreign aid and was involved in “acts of war” including terrorism.

In December, 2018, the Palestinians announced they would stop accepting American aid because they feared they would be sued under the provisions of ATCA.

During the Trump Administration, both former Secretary of State Mike Pompeo and former U.S. Ambassador to the United Nations Nikki Haley worked to cut funding to the Palestinians, who lost $165 million in U.S. assistance because of their failure to stop their pay-for-slay policy.