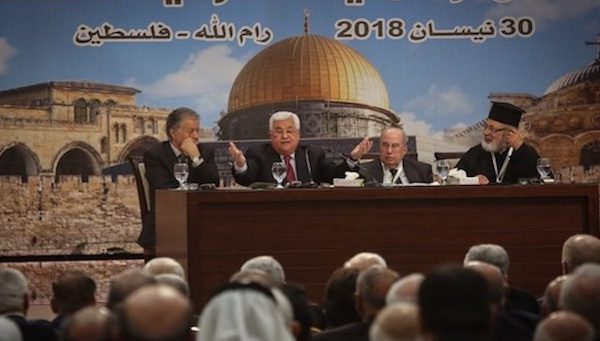 In a recent op-ed, Dylan Williams of J Street called on the Biden administration to “rebuild the U.S. relationship with moderate Palestinian leaders.”

Since presumably J Street would not claim that the leaders of the genocidal Hamas terrorist group are “moderate,” then the “moderate Palestinian leaders” Williams and J Street have in mind must be Palestinian Authority (PA) chairman Mahmoud Abbas and those around him.

Less than three years ago — on April 30, 2018 — Abbas stood before the Palestine National Council’s opening session (PNC) and delivered a blatantly antisemitic speech.

Then Abbas insinuated that the Holocaust was caused by the Jews’ own “social behavior, [charging] interest, and financial matters.”

Abbas’ previous claims about the Holocaust — described in detail in his 1982 doctoral dissertation and subsequent book — include that only a few hundred thousand, not six million, Jews were killed by the Nazis; and that David Ben-Gurion collaborated with the Nazis to kill Jews, to garner world sympathy for creating a Jewish state.

What did J Street — which now speaks of “moderate Palestinian leaders” —  say about Abbas’ speech? In a May 1, 2018, press release, J Street said that it “strongly condemns remarks made by President Mahmoud Abbas on Monday that featured absurd antisemitic tropes and deeply offensive comments on the history of the Jewish people and Israel.” J Street called Abbas’ speech “incendiary” and argued that “there is absolutely no excuse” for what he said.

If, less than three years ago, Abbas was — according to J Street — an antisemite, how is he now a “moderate”? Does antisemitism have a shelf life and an expiration date? Or does J Street simply wait until everybody has forgotten about Abbas’ speech so that it can resume calling him “moderate” to advance the Palestinian cause?

And is J Street simply hoping that the rest of us will not notice that under Abbas, antisemitism still fills the PA-controlled media and school textbooks? Or does J Street acknowledge that Abbas is still an antisemite? And if so, where are those mysterious, unnamed “moderate Palestinian leaders” to whom Dylan Williams referred and whom J Street wants the US to shower with financial aid and political support?

J Street’s May 2018 condemnation of Abbas was a rare and impressive criticism of a figure whom J Street had almost never previously criticized.

Publicly challenging a leader whose policies you generally support is never easy. At the time, some skeptics, myself included, wondered if the condemnation was sincere or was just a quick gesture intended to make J Street look reasonable but with no intention of actually confronting Palestinian antisemitism.

If J Street wants the Jewish community to believe that its opposition to Palestinian antisemitism is sincere, it must insist that Abbas officially recant his speech, withdraw his antisemitic book from circulation, and eliminate antisemitic statements from the PA-controlled media and schools.

When I say “recant,” I don’t mean a mealy-mouthed statement like the one Abbas issued in 2018, following the international uproar over his antisemitic remarks. “If people were offended by my statement in front of the PNC, especially people of the Jewish faith, I apologize to them,” Abbas said.

That wasn’t a genuine apology. Not even close. The problem with Abbas’ speech was not that some people took offense (as if they were being thin-skinned and overreacting); the problem is that what Abbas said about Jews was wrong, vile, and bigoted. That’s what Abbas has to admit and recant. Admitting he was wrong is vitally important to send a message to the Palestinian public that the antisemitic lies they have been hearing all these years — in their leader’s speeches and books and in their media and schools — were wrong.

Only when the Palestinians, starting with their leaders, genuinely give up their antisemitism can we take seriously claims by Dylan Williams and J Street that “moderate Palestinian leaders” exist with whom the United States should interact.

Moshe Phillips is the national director of Herut North America’s U.S. division. A Zionist Organization of which The Lid is an active member.  Why don’t you join us? More information is available at www.herutna.org.
u
Jeff Note: J Street is the  Washington, D.C., based “Jewish” faux Zionist groups created specifically to attack the Jewish State.  It was founded with seed money from George Soros; J Street had minimal legitimacy in the Jewish Community but was promoted by Barack Obama as an important organization because it supported his anti-Israel positions. It was founded in 2008 and markets itself as a kind of left-wing AIPAC. From its very beginning, the group goes out of its way to emphasize its motto of “pro-Israel, pro-peace. The motto is a lie. To quote Professor Alan Dershowitz in the film “The J Street Challenge,” J Street is “neither pro-Israel nor pro-peace.”