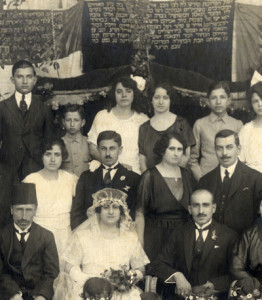 Who Authored the Kinot Said on Tisha B’Av?

As recently as 1992, more than 4,000 Jews were being held against their will in Syria, unable to leave and kept under watch, branded as “Mussawi,” followers of Moses. At that time, 50,000 Jews from Syria lived in Brooklyn’s Flatbush area. The rest of “little Aleppo” were spread across the United States and Latin America, but little was known of the past of these Sephardic Jews.

[An earlier version of this article appeared in AVOTAYNU, from which current subscriptions and access to back issues can be obtained at www.Avotaynu.com]

For the most part they are descendants of the Spanish-Jewish nobility that at first had settled in Livorno, Italy, after 1492. The noble Jewish families of the Spanish court bore such names as Lumbroso, Laniado, Sason, Blanco, Franco, Athias, Salas, Nunes, Garzon and Lofez.

When ships carrying the best of the Spanish-Jewish nobility—Jewish astronomers, map makers, philosophers and courtiers who had worked their way up into the noble houses of Castile and Aragon — arrived in 15th century Syria, they found only about 400 Jewish families living there. The native Jews, who had lived in Aleppo for thousands of years, introduced the signoreem, as these Italian/Spanish Jews were called, to the Aleppo Codex, or keter (crown) of Aleppo, a famous rabbinical document, well-known in the world of Orthodox Sephardic Jewry.

The Mustarabeen of Aleppo (native Arab Jews, as the Spanish called them) claim direct descent from King David through the Dayyan family of Syria, said to be living there since 70 C.E. These Jews had lived in Syria since the destruction of the second temple and perhaps even earlier. By the time the Spanish emigration was completed, Aleppo Jewry numbered nearly 30,000.

Spanish and Portuguese Jews kept themselves a class apart from the Arab Jews of Syria. This branch of Sephardic Jewry had brought its wealth, gold platters, priceless paintings and banking fortunes with them from Spain and bought up the most elegant homes in Aleppo.

A few of the many wealthy or noble Spanish-Jewish families’ names were surnames such as:

At first, marriage was discouraged between Spanish Jews living in Aleppo and native Arab Jews of the area. By the turn of the 19th century, however, intermarriage between the two groups had been accepted, although Spanish surnames still are common among Syrian Jews from Aleppo and Damascus, Syria, and Alexandria, Egypt. Syrian Jews still maintain a “class of gentility” in which the highest “class” refers to itself as signores — relating to their origins in Venice, Italy, in the 16th century, after having left Spain a century earlier.

The Spanish Jews of Aleppo built elegant homes apart from the generally dingy apartments of the native Syrian Jews. By 1900, visitors to Aleppo noted that the residences of the Sephardim from Spain were self-contained villages, each with its own suppliers of food and services, including tailors, bakers and grocers. Each Spanish quarter had its own basita, or administrator.

Native Syrian Jews, in contrast, lived in small apartments or rooms called the “hosh.” Poor families of Arabic-speaking Jews, in contrast to the Ladino-speaking Spanish Jews, shared a communal kitchen and outhouse. A well in the hosh courtyard supplied water, and until 1930, there was no electricity for the less wealthy Jews of Aleppo.

The Aleppo properties of the Ladino-speaking Jews from Spain, Portugal, Italy and Greece were luxurious, with stone carvings of angels on the walls (called the Shemaya). Ladino homes in Damascus were even more elegant. Interior walls of these elite homes were covered with priceless paintings brought from Spain, Italy and other countries, along with hidden wealth. Frescoes covered the walls, and balconies often were decorated with elaborately carved wooden panels. In Aleppo, Damascus and Alexandria, the “court” Jews of Spain set up their own Jewish quarters and synagogues.

Wealthy Syrian Jews never did their own shopping; a trusted business associate was hired to do the bargaining. The custom of having the food delivered to the house was carried over when Sephardic Jews emigrated to Latin America and the United States. In contrast to the life of hardship in Eastern European ghettos, Sephardim had their own servants. They took their families on vacation to resorts in the Lebanese mountains, since there was no Pale of Settlement or travel barrier. Life at the turn of the 20th century was abundant for wealthy Syrian Jews. By contrast, life was very bad for the poor Arab Jews who had to bear the Jew-baiting of poor Moslem and Christian neighbors with whom they shared communal apartments, courtyards, outhouses and kitchens.

Spanish Jews, called Spanioli, were regarded as the franj (foreigners) who retained the Ladino language and their own class status apart from the poor gentiles and Moslems. The wealthier families could buy protection and tolerance in many instances, although life was never truly secure. The higher class Jewish residential area in the 1930s was called the Jamilia.

Until the turn of the 20th century, almost all Jews in Aleppo lived in the center of the ancient city within the confines of the Bahista, a Spanish-culture enclave. The Bahista contained the Spanish (Ladino) synagogue and the Arabic-speaking synagogue, Bet Nassi. Almost all Spanish Jews in Syria spoke fluent Arabic as well as Ladino. Toward the end of the 18th century, Arabic became their everyday language, and Spanish was no longer used, except by the Jews 60 miles to the north in Turkey, and those Sephardim in Greece, the Balkan countries, Holland and Latin America.

At the end of the day, the Sephardim of Aleppo typically went to a Jewish cafe to hear an elaborate Spanish-Jewish musical ensemble called el Nobe in Spanish and a nobeh in Arabic. It is composed of a singer and several players of stringed instruments and drums, derbekcy in Arabic. Songs were either Pismoneem (Hebrew prayers and poems sung to popular Arabic songs), Spanish songs set to Arabic music, or popular Arabic songs in Arabic. Usually the entire family would come to El Nobe to conclude a business deal or act as a matchmaker between families. Often they would partake of a hot orange blossom-flavored mild custard topped with ice cold fruit marinated in raisin wine, called Morena me Ilaman, named after a Sephardic song of 1495.

Anne de Sola-Cardoza, a free-lance writer, lives in San Diego, California.  The descendant of conversos, the story of her return to Judaism appeared in AVOTAYNU, Vol. V, No. 4.