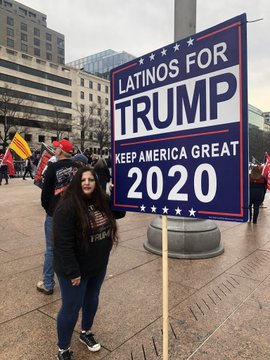 Floods trap many in Florida as Ian heads to South Carolina

With the presidential contest over and the various court cases filed by Trump’s legal team and the last attempt by the state of Texas failing to change the outcome of the election, the President’s most loyal supporters have not given up.

Several weeks ago, the Million MAGA rally drew over 500,000 people to DC  This event by all accounts was smaller but still drew several thousands of spirited conservatives.

Even with hundreds of witnesses to voter fraud and irregularities, and extensive research calling to task Dominion voting machines, it is clear that the election is over. Millions of Americans will remain skeptical of the results and America has a very divided electorate.

Throwing fuel to the fire is the admittance by the mainstream media that the Hunter Biden scandal surrounding his laptop and business dealings with a Chinese energy company, was an actual occurrence and not ” Russian conspiracy”. They even reported that Hunter Biden is actually under investigation.

Trump’s supporters are more upset than ever.

Thousands of conservatives and Trump supporters descended on Freedom Plaza in DC on Saturday for the March for Trump/Jericho March.

General Flynn spoke at the Jericho March and said, “We the people decide who will be president.”

The march was co-hosted by JerichoMarch.org, stopthesteal.us, the Phyllis Schlafly Eagles, and Virginia Women for Trump.

At another nearby rally, controversial Infowars host Alex Jones and Owen Shroyer rallied the most devout Trump supporters. There were a few reports of Proud Boy members clashing with ANTIFA foot soldiers. Roger Stone made a late-night Friday appearance before the main protests/

DC: Epic moment as Marine One performs a flyover as thousands of Trump supporters sing “The National Anthem” in Freedom Plaza for the “March for Trump” rally in support of @realDonaldTrump #tatumreport #drewhernandez pic.twitter.com/luq1XYjzaq

Just before noon at the Freedom Plaza in DC for the “March for Trump.” Crowd is chanting “USA!” and “Stop The Steal” ahead of things officially kicking off. Members of the far-right group Proud Boys can be seen throughout the crowd. Covering today on @MSNBC pic.twitter.com/9tStG3D4jK

#NOW: The second post-election March for Trump should be getting underway soon here in Washington. Hundreds of Proud Boys just arrived in Freedom Plaza, chanting F*ck Antifa and USA on a short march from outside the Hotel Harrington. pic.twitter.com/2gw3twhQvN

“The system is publicly stealing this election from the biggest landslide and the biggest political realignment since 1776” – #AlexJones pic.twitter.com/AKxBwWUz7D