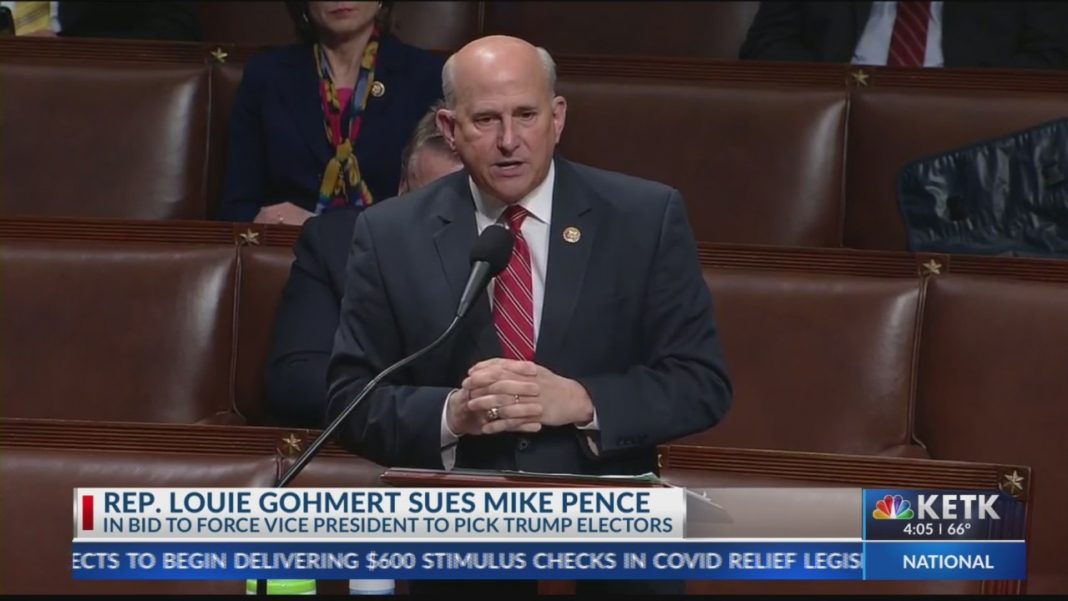 Just over a week before Congress meets to formalize Democrat Joe Biden’s victory in the November presidential election, a Republican lawmaker from Texas is asking a federal judge to give Vice President Mike Pence the exclusive power to throw out Electoral College votes, according to a report on the Courthouse News Service web site.

According to the Courthouse News report, this marks the latest in a series of long-shot legal bids from Republicans seeking to overturn Biden’s win, cases that have been routinely rejected by the courts.

In the Texas case, Gohmert and a group of Arizona Republicans asked the judge to throw out various provisions of federal law governing the Electoral College count and to grant Pence the “exclusive authority and sole discretion in determining which electoral votes to count for a given state.”

Legal experts, as they have with many other Republican-led election challenges, quickly dismissed the lawsuit’s chances, according to the Courthouse News report.

“If the Twelfth Amendment somehow gave the Vice President the power to unilaterally throw out electoral votes for the other guy in favor of their own party (and even themselves), one might think that one of them would’ve noticed by now,” said Steven Vladeck, professor of law at the University of Texas at Austin School of Law.

Rick Hasen, professor of law and political science at the University of California, Irvine said, “No, this won’t work.”

Under the law, Congress meets Jan. 6 to finalize the Electoral College vote, with the vice president presiding over the typically ceremonial event. The Constitution gives the House the power to break a tie – a rarity that hasn’t happened since the 1800’s, according to the Associated Press – but Gohmert’s lawsuit asks the judge to declare that Pence “must ignore and may not rely on any provisions of the Electoral Count Act that would limit his exclusive authority and his sole discretion to determine the count.”

On Sunday, Trump tweeted: “See you in Washington, DC, on January 6th. Don’t miss it. Information to follow!”

Joining Gohmert in the lawsuit are 11 Arizona electors. They asked Judge Jeremy Kernodle, a Trump appointed federal judge in Tyler, for an expedited judgment on the matter.

In a statement released to a CBS News affiliate by Gohmert, the lawmaker said:

“The 2020 presidential election was one we’d expect to see in a banana republic, not the United States of America. In fact, the rampant fraud and unconstitutional actions that took place were so egregious that seven contested states– Arizona, Georgia, Michigan, New Mexico, Nevada, Pennsylvania, and Wisconsin all sent dueling slates of electors to Congress. This puts Vice President Mike Pence in a position where some argue he has to choose between morality and the law. That is not the case.

“It is also critical to note that as many formerly in the mainstream media, now the Alt-Left media, continue to say that every court has said there is no evidence of fraud.  That is disingenuous, deceitful, and flat out dishonest. The truth is that no court so far has had the morality and courage to allow evidence of fraud to be introduced in front of it.

“We continue to hold out hope that there is a federal judge who understands that the fraud that stole this election will mean the end of our republic, and this suit would insure that the Vice-President will only accept electors legitimately and legally elected. There must be an opportunity for a day in court when fraud was this prevalent.

“It is for this reason that I and other plaintiffs have filed a complaint for expedited declaratory and emergency injunctive relief to seek judgment from the court on the Vice President’s authority when presiding over the Senate during the Joint Session of Congress. We are asking the court to uphold the powers laid out in the United States Constitution which grant the Vice President the exclusive authority and sole discretion in determining which electoral votes to count.

As outlined in the filing, the Electoral Count Act is unconstitutional because it directs Vice President Pence to legitimize electoral votes in violation of the Electors Clause and limits or eliminates his Twelfth Amendment authority to determine which slates of electors should be counted and which, if any, may not be counted.  This is fundamental because no statute can constitutionally supply rules to the extent that such statute violates the U.S. Constitution.

Thanks to spineless politicians, corrupt state officials and a coordinated effort to undermine the will of the American people in favor of business as usual in the D.C. swamp, we now find ourselves in a place where a stolen election becomes just another one of the miscarriages of justice this town refuses to remedy.  The D.C. elites want to sweep these electoral injustices under the rug, just as they have done with countless other scandals such as the Russia-collusion hoax, the Biden-Ukrainian quid-pro quo, and Hillary Clinton’s mishandling of classified information, to mention only a few. For the sake of the future of our Republic, come January 6th, Vice President Pence must be authorized to uphold the legal votes of millions of Americans and preserve our nation’s great experiment in self-governance.”

Electors across the country cast their votes on Dec. 14. Biden won, receiving 306 electoral votes, compared to Trump’s 232. In some Biden states, pro-Trump electors cast ballots of their own, however, they have no legal significance.

On Tuesday, the AP reported that President Trump lashed out at congressional Republicans after the House easily voted to override his veto of a defense policy bill.

A total of 109 Republicans, including Wyoming Rep. Liz Cheney, a member of GOP leadership, joined with Democrats on Monday to approve the override, which would be the first of Trump’s presidency. The Senate is expected to consider the measure later this week, according to the AP report.

Trump called the override vote a “disgraceful act of cowardice and total submission by weak people to Big Tech. Negotiate a better Bill, or get better leaders, NOW! Senate should not approve NDAA until fixed!!!″

AP reported that the 322-87 vote in the House sends the override effort to the Senate, where the exact timing of a vote is uncertain.

Senate Majority Leader Mitch McConnell, R-Ky., wants a vote as soon as Wednesday, but Vermont Sen. Bernie Sanders objected to moving ahead until McConnell allows a vote on a Trump-backed plan to increase COVID-19 relief payments to $2,000.

“Let me be clear: If Sen. McConnell doesn’t agree to an up or down vote to provide the working people of our country a $2,000 direct payment, Congress will not be going home for New Year’s Eve,″ said Sanders, an independent who caucuses with Democrats. “Let’s do our job.”

AP reported that McConnell said Tuesday that approval of the $740 billion National Defense Authorization Act, or NDAA, is crucial to the nation’s defense and to “deter great-power rivals like China and Russia.″

The bill “will cement our advantage on the seas, on land, in the air, in cyberspace and in space,″ McConnell said. The bill also provides a 3% pay raise for U.S. troops, improvements for military housing, child care and more, McConnell said, as was reported by the AP.

AP reported that Trump rejected the defense measure last week, saying it failed to limit social media companies he claims were biased against him during his failed reelection campaign. Trump also opposes language that allows for the renaming of military bases that honor Confederate leaders.

House Speaker Nancy Pelosi, D-Calif., said after the House vote that lawmakers have done their part to ensure the NDAA becomes law “despite the president’s dangerous sabotage efforts″ as was reported by the AP.

Trump’s “reckless veto would have denied our service members hazard-duty pay,″ removed key protections for global peace and security and ”undermined our nation’s values and work to combat racism, by blocking overwhelmingly bipartisan action to rename military bases,″ Pelosi said, according to the AP report.

Sen. Jim Inhofe, R-Okla., chairman of the Senate Armed Services Committee, said he was “disappointed” with Trump’s veto and called the bill “absolutely vital to our national security and our troops.″

“This is the most important bill we have,″ Inhofe said Tuesday on the Senate floor. “It puts members of the military first.″

AP has reported that Trump has succeeded throughout his four-year term in enforcing party discipline in Congress, with few Republicans willing to publicly oppose him. The bipartisan vote on the widely popular defense bill showed the limits of Trump’s influence in the final weeks before he leaves office, and came minutes after 130 House Republicans voted against a Trump-supported plan to increase COVID-19 relief checks to $2,000. The House approved the larger payments, but the plan faces an uncertain future in the Republican-controlled Senate, another sign of Trump’s fading hold over Congress.

Besides social media and military base names, Trump also said the defense bill restricts his ability to conduct foreign policy, “particularly my efforts to bring our troops home.″ Trump was referring to provisions in the bill that impose conditions on his plan to withdraw thousands of troops from Afghanistan and Germany. The measures require the Pentagon to submit reports certifying that the proposed withdrawals would not jeopardize U.S. national security, according to the AP report.

AP reported that the Senate approved the bill 84-13 earlier this month, well above the margin needed to override a presidential veto. Trump has vetoed eight other bills, but those were all sustained because supporters did not gain the two-thirds vote needed in each chamber for the bills to become law without Trump’s signature.

AP reported that Rhode Island Sen. Jack Reed, the top Democrat on the Senate Armed Services Committee, said Trump’s declaration that China benefited from the defense bill was false. He also noted the shifting explanations Trump had given for the veto.

Reed called the Dec. 23 veto “Trump’s parting gift to (Russian President Vladimir) Putin and a lump of coal for our troops. Donald Trump is showing more devotion to Confederate base names than to the men and women who defend our nation.″

The defense bill guides Pentagon policy and cements decisions about troop levels, new weapons systems and military readiness, personnel policy and other military goals. Many programs, including military construction, can only go into effect if the bill is approved. (AP)