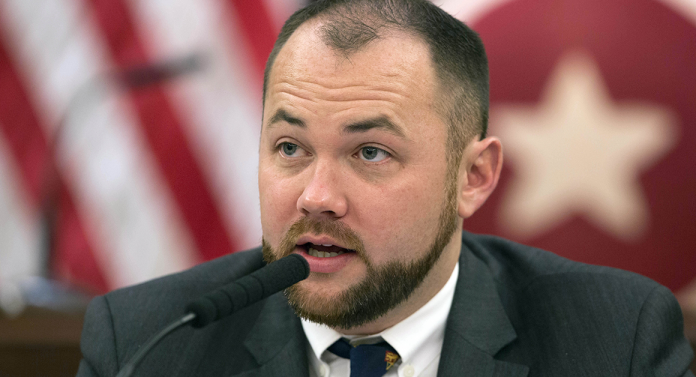 (NEWSMAX) A video of an NYPD officer – attempting to break up a hostile crowd – being put in a headlock by a resisting suspect was tweeted out by the the Sergeants Benevolent Association as an example of the effect of anti-police legislation.

The SBA, comprised of around 13,000 active and retired sergeants of the NYPD, tweeted with the full video of the altercations:

“COREY JOHNSON your STUPID law is about to be signed by NYC STUPID Mayor it’s time you both take your community input & grab these perps yourself.”

DeBlasio is a FAILURE in every sense of the word. The only Mayor in America where the people have a petition to have him removed. An honorable profession in the NYPD has been destroyed by one man who simply hates cops. https://t.co/MJg8eih6RA

Corey Johnson, a Democrat, is the speaker of the New York City council. He introduced the bill to criminalize the use of the chokehold by NYPD officers.

The July 1 video, with a man filming screaming obscenities and anti-police sentiment, shows NYPD attempting to disperse a crowd in the Bronx and an officer wrestling a suspect. The officer ultimately was put in a headlock by the combatant before he escaped and fled to cheers by the man filming and others.

Under the City Council bill, officers using a chokehold like the one he was put in would face misdemeanor charges and could lead to up to a year in jail.

The officer put in the headlock sustain a laceration to the head that required staples, sources told the New York Post.

The escapee, who was a known gang member who had been arrested 11 times – including gang assault, criminal possession of a loaded firearm, and robbery – turned himself in to the 46th Precinct, police told the Post.

He was originally released without charges, per the report.

“The NYPD was disappointed that the individual was not charged initially,” an NYPD spokesperson told the Post. “The violence against the police officer speaks for itself. We are now in discussions with the District Attorney regarding the case.