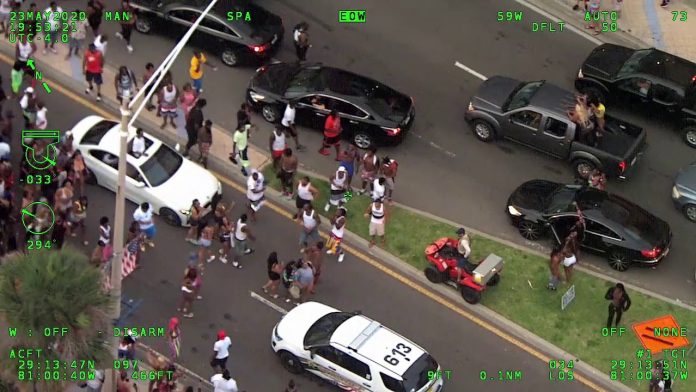 In Daytona Beach, Florida, gunfire erupted Saturday night along a beachside road where more than 200 people had gathered and were seen partying and dancing despite the restrictions. Several people were wounded and taken to the hospital, A.P reported

“Disney is closed, Universal is closed. Everything is closed so where did everybody come with the first warm day with 50% opening? Everybody came to the beach,” Volusia County Sheriff Mike Chitwood said at a Sunday news conference, referring to crowds in the Daytona Beach area.

Daytona Police Chief Craig Capri said Sunday at a news conference that two people were shot around 7:30 p.m. on South Ocean Avenue near Breakers Oceanfront Park. Police later discovered four people were hit by shrapnel during the shooting. None of the injuries are life-threatening, Orlando Sentinel reported.

Chitwood said “the linchpin” of the disturbances that happened Saturday in Daytona Beach was an incident that drew a large crowd around a man tossing cash from a vehicle.

Helicopter footage released by the Sheriff’s Office shows “a couple hundred people” surrounding the car parked on State Road A1A in front of a Burger King and dozens more gathered on the sidewalk.

“We’re going to identify him, and we’re going to charge him,” Chitwood said, without elaborating on possible charge, Orlando Sentinel Reported

Below is the actual police footage from a helicopter