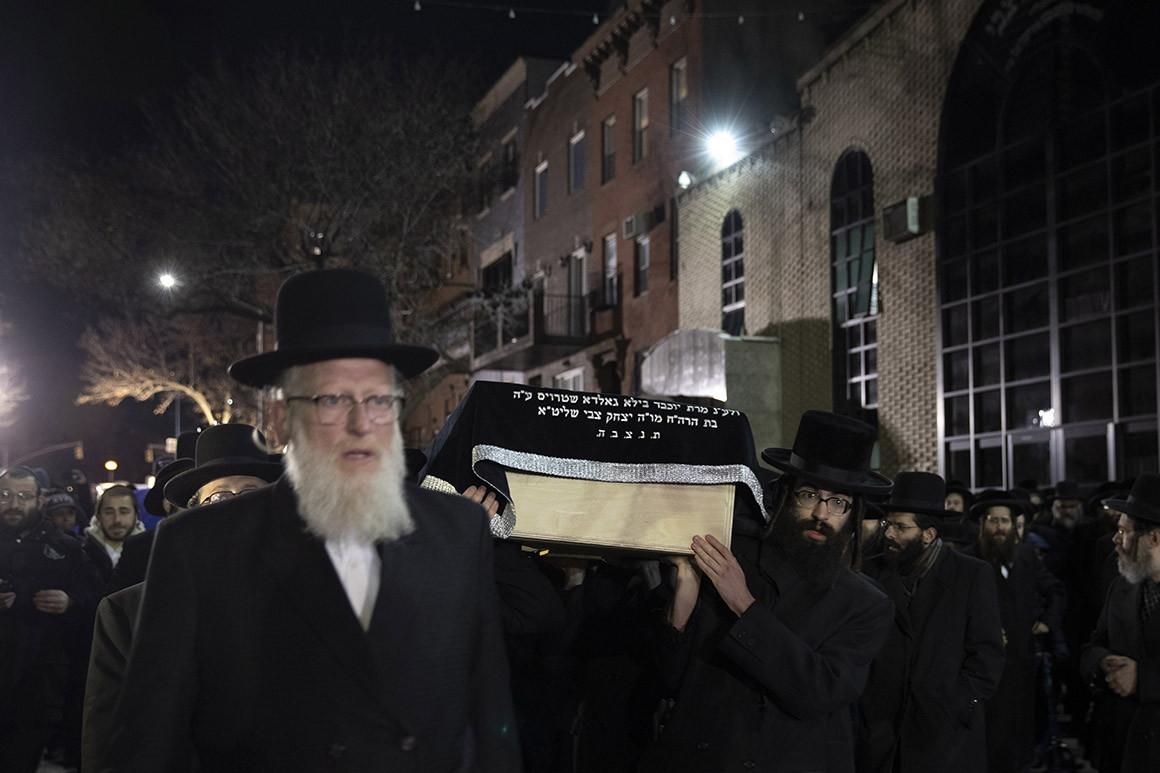 Borough Park, Crown Heights, Williamsburg and Midwood all have above-average positive coronavirus positive test rates compared to most other areas in the five boroughs, JTA reported.

Orthodox Jews, for whom large families and frequent communal gatherings could have led to easier transmission of the virus, according to US News and World Report.

In Borough Park, more than 67% of coronavirus tests have come back positive — the highest rate in Brooklyn and sixth highest of any Zip code in New York City.

Haredi, men are accustomed to attending communal prayers three times a day, and social lives revolve around synagogue and lifecycle celebrations like weddings and funerals. Haredi or Orthodox families are also larger than average and tend to live in dense neighborhoods in the city, JTA reported.

Many incidents have been documented on social media, showing Orthodox gathering in the streets for weddings and other religious communal events.

A Orthodox Wedding held in Marine Park went viral on Facebook and many virulent anti-Semitic remarks followed from readers. Many people in the Jewish community have pleaded with the Orthodox to refrain from their traditions during the pandemic.

Mikveh (ritual baths) have mostly modified their services and are allowing Jews to partake in the ritual immersion to achieve purity only by appointment.

Ironically, the Corona neighborhood tops the list at more than 77%.

The five city Zip codes with the highest positive test rates are in Queens, with the Corona neighborhood topping the list at more than 77%. It is speculated that these working class, highly Hispanic areas are populated by individuals who jobs are impossible to preform  from home and are considered essential .

The areas of New York that have a larger share of households with people over 65 had higher rates of confirmed cases per 1,000 people, the AP found. But other demographic variables – from high household incomes to large shares of foreign-born populations to areas with large numbers of overcrowded housing units – saw no significant link to COVID-19 case trends, US News and World Report, explained.

Asked about why some areas had been hit harder than others, Dr. Mitchell Katz, chief executive of the city-run hospital system, told AP that crowded housing could play a role.

“We know that in Queens, many families, because of poverty, live together in very close quarters. So that while we are practicing as a city social distancing, you may have multiple families living together in a very small apartment. And so it’s easy to understand why there’s a lot of transmission of COVID occurring,” he said.

Dr. Katz observation does not 100% prove true however, the bustling Chinese community in Flushing, Queens, have had as few positive tests per capita as any wealthy, whiter part of the city, USNWP reported.