Nadler: Trump's Belief He Cannot Be Impeached is 'Dangerous Nonsense' - The Jewish Voice

Nadler: Trump’s Belief He Cannot Be Impeached is ‘Dangerous Nonsense’ 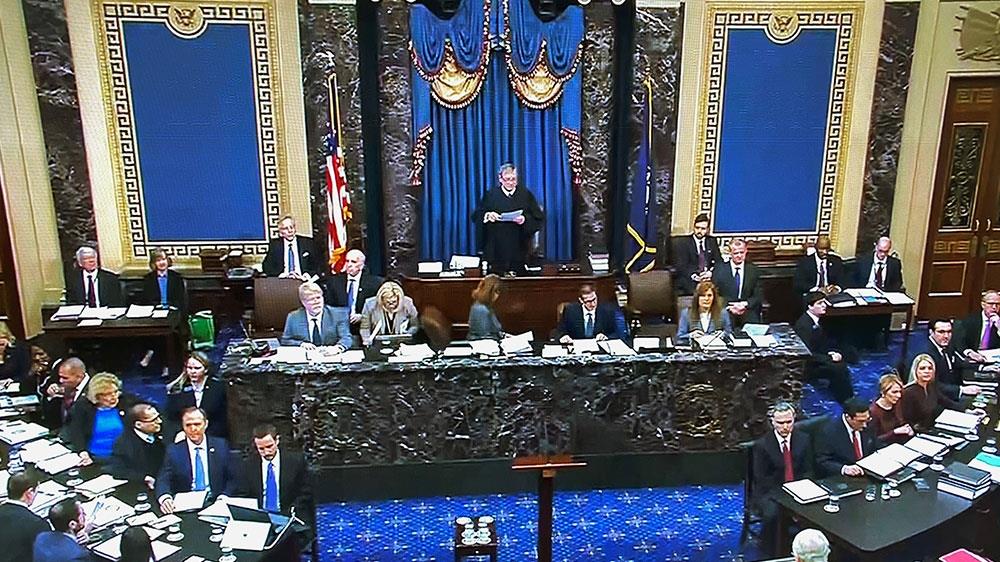 Nadler, the head of the House Judiciary Committee, kicked off the second day of the Democrats’ case of the Trump impeachment trial in the Senate Thursday, where the 100 Senators will decide the president’s guilt or innocence.

“A president who sees no limit on his power manifestly threatens the republic,” Nadler said as he accused Trump of “abuse of power, betrayal of the nation, and corruption in elections into a single unforgivable scheme” — all of which Nadler says meets the Constitutional standard for high crimes and misdemeanors and removal from office.

“It is wrong, it is illegal,” Nadler said, adding that the 44 U.S. presidents who preceded Trump “would be shocked to the core.” Nadler contended that Trump’s abuse “puts President Nixon to shame,” the scandal-ridden 1970s-era president who resigned in disgrace before he could be impeached.

“President Trump has made clear in word and deed that he will persist in such conduct. He poses a continuing threat to our nation, to the integrity of our elections, to our democratic order. He must not remain in power one moment longer,” Nadler said.

Trump is accused of pressuring Ukraine to open a corruption investigation into former Vice President Joe Biden — a major Democratic challenger to Trump’s re-election bid. He also allegedly withheld military aid to Ukraine unless President Volodymyr Zelenskiy publically announced a probe into Biden, his son Hunter’s job with a Ukrainian gas company, and a debunked theory that it was Ukraine, not Russia, that interfered in the 2016 U.S. election. No evidence against the Bidens ever surfaced.

Florida’s Val Dennings said Republicans believe the only thing Democrats are worried about is winning the next election and keeping Trump from a second term. She said the case is truly about making sure the vote of every American matters.

Trump again ridiculed the Democrats’ impeachment case Thursday, tweeting “The Democrat House would not give us lawyers, or not one witness, but now demand that the Republican Senate produce the witnesses that the House never sought, or even asked for?”

Trump and his lawyers were invited to appear before the House Judiciary Committee during the impeachment inquiry, but declined.

The two articles of impeachment accuse Trump of abusing the office of the presidency and obstructing congressional efforts to investigate his Ukraine-related actions.

The Democrats have one more day to present their case before the president’s legal team begins its three days to lay out their case.

Jay Sekulow, one of Trump’s lawyers, said after Wednesday’s session that the fact the impeachment proceedings are even taking place is “ridiculous.”

“Are we having an impeachment over a phone call?” he asked reporters. “Or has this been a three-year attempt to take down a president that was duly elected by the American people? And we’re doing this with 10 months to go to a general election. Pretty dangerous for our republic, in my view.”

Trump has said throughout the process he did nothing wrong in his discussions with Zelenskiy, frequently describing their half-hour phone call as “perfect.”

Sekulow said, “We believe, without question, the president will be acquitted. There is not a doubt.”

Trump eventually released the military aid to Ukraine and Zelenskiy never opened an investigation into the Bidens — proof, Republicans say, that Trump did not engage in a quid pro quo with Ukraine — the Biden probes in exchange for the defense assistance.

But Schiff said Trump only released the funds because “he got caught,” when a still unidentified intelligence whistleblower filed a complaint that Trump in the July 25 telephone asked Zelenskiy to “do us a favor,” to start the politically investigation against Biden.

Trump is only the third U.S. president to be impeached and tried before the Senate. Andrew Johnson was impeached in 1868 because of a post-Civil War dispute over states that seceded from the union.

Bill Clinton was impeached in 1998 for lying to a grand jury over a sex scandal. Both Johnson and Clinton were acquitted and remained in office until the end of their terms. (VOA News)