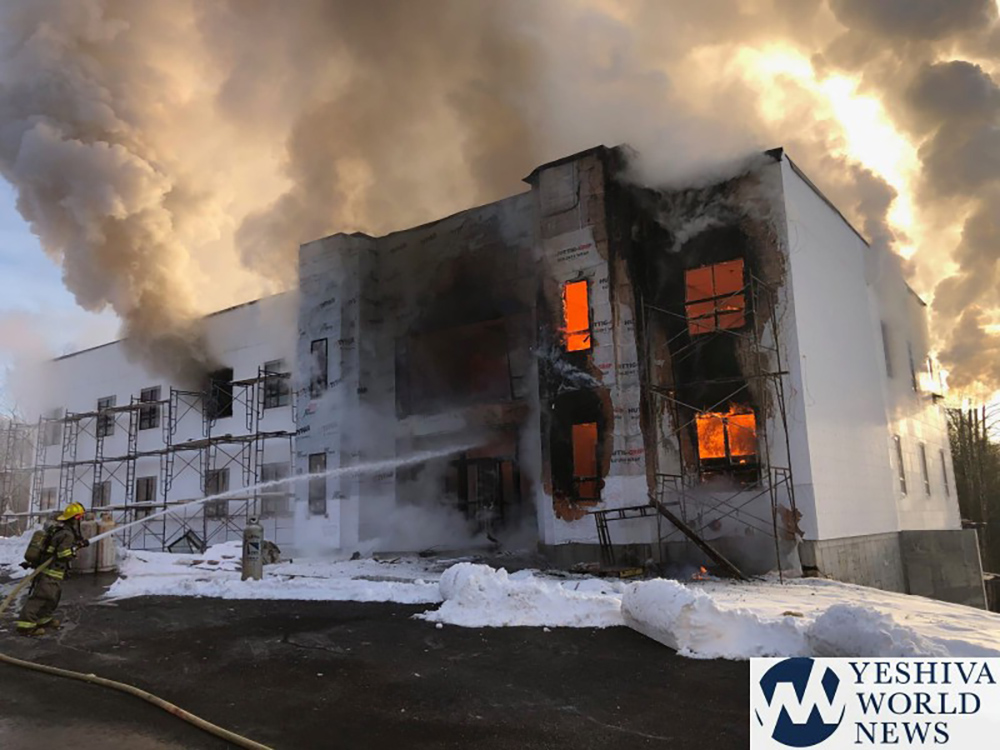 A blaze has laid waste to a new building that is part of a Fallsburg Yeshiva girls school. An emergency fund has been launched to help rebuild the edifice. Photo Credit: Yeshiva World News

A blaze has laid waste to a new building that is part of a Fallsburg Yeshiva girls school.

An emergency fund has been launched to help rebuild the edifice.

Bnos Devorah Raizel Elementary School was, according to Vos Iz Neias, a structure that “represented dreams and aspirations. The dreams of its founders and the aspirations of its young students.”

The school had long ago outgrown its facilities on Reb Chiya Way on the campus of Yeshiva Gedolah Zichron Moshe of Fallsburg. It was two years ago that construction began on a new school building situated on Laurel Park Road, across the street from the school’s current trailers and bungalows.

The design would have seen the building serve as home for nearly 200 students. The project was nearing its end, and plans were already been drawn up for a celebration of its opening.

“And then the unthinkable happened,” noted Vos Iz Neias. “On the morning of Thursday, January 23, the dreams of a new building went up in smoke – very literally. A massive blaze broke out at the construction site of Bnos Devorah Raizel’s building, completely destroying the structure, leaving behind nothing more than a pile of rubble.” The few hundred students of the school have been located in temporary trailers.

The Jewish community, however, is always resilient. Less than a day after the devastating blaze, groups got together to launch a campaign aimed at raising money to restore what had been destroyed period school officials promised to rebuild and carry on.

Bnos Devorah Raizel, the Bais Yaakov of the Fallsburg Yeshiva community, is named for Mrs. Devorah Raizel (Debbie) Shick a”h bas Reb Avrohom Yosef and Pessia Frankel, the school is a home away from home for its many students. The school started in a small house left from the original Laurel Park Hotel and grew from classes of four students to classes of 25 and now close to 200 girls.

Rav Elya Ber Wachtfogel, rosh yeshiva of Yeshiva Gedolah of South Fallsburg, drafted a letter in which he asks Jews around the world to take part in assisting the school recoup its losses. Reimbursement via an insurance policy will not come close to covering the cost of rebuilding, he said. He called it absolutely vital to raise the money from among the Jewish community so that education of young Jews can continue.

“The fire will not get us down,” said Rav Ephraim Sher, Nosi of the Fallsburg Yeshiva, shortly after the blaze. “With Hashem’s help, we have started rebuilding today.” In fact, the school has established a goal of raising $500,000 in order to ensure the construction of a building for Bnos Devorah Raizel l’sheim ul’tiferes.

Those who wish to participate in the emergency campaign are invited to go to: https://www.rayze.it/rebuildfallsburg/ or call 845-767-8100.