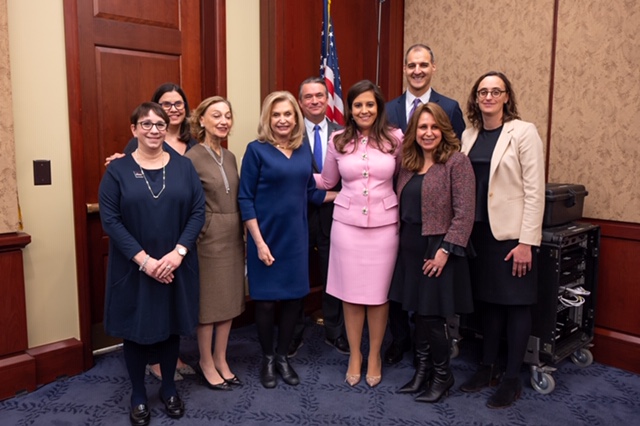 The Jewish Voice on Wednesday issued a statement welcoming Congressional passage of the Never Again Education Act, which passed by unanimous consent. The bill had previously advanced through the House of Representatives with overwhelming support and now heads to President Trump’s desk for his signature.

“We are exceptionally glad that the Never Again Education Act will be signed into law,” said Jewish Voice publisher, David Ben Hooren. “Anti-Semitism is once again on the rise as many wish to assign blame to Jews for the spread of the coroavirus. As we all know, visceral anti-Semitism is a permanent part of and endemic to our society and societies all over the word. It is a stubborn scourge that keeps rearing its ugly head in every generation. We need mandatory Holocaust education to stem the tide of this aggressive malady,” he added.

The success of The Never Again Education Act would not have been possible without the exceptional leadership of Representatives Carolyn Maloney and Elise Stefanik and Senators Jacky Rosen, Kevin Cramer, Marco Rubio and Richard Blumenthal for spearheading the bills in the House and the Senate; Senators Lisa Murkowski and Joe Manchin for their support as chairwoman and ranking member of the Senate Committee on Energy & Natural Resources.

“If there exists a silver bullet to defeat the spread of bigotry and hatred, it is education. Through this legislation, teachers around the country will have federal support in their efforts to stamp out anti-Semitism by teaching about its abhorrent consequences,” said CUFI founder and Chairman Pastor John Hagee.
“CUFI’s eight million members have made combating the rising tide of anti-Semitism a top priority, and we are extremely grateful for the tremendous bipartisan support the Never Again Education Act has enjoyed in both Capitol chambers,” Hagee added.

“Combatting hate and intolerance must always be a priority and I’m glad that the Senate agrees. Passing this bill by unanimous consent today sends a strong message that the Congress is overwhelmingly united in combatting antisemitism and hate through education. Children are not born with hate in their hearts, it is up to us to make sure they never learn it,” said Rep. Maloney. “To do that, we must make sure our educators have the tools they need to teach about the Holocaust, an incredibly difficult subject to teach and for students to understand. I want to thank Senators Rosen, Cramer, Rubio, and Blumenthal for moving this bill so quickly through the Senate and their partnership in this effort.”

“Anti-Semitism is on the rise in the United States and across the globe. We must act to reverse this dangerous course,” said Senator Rosen, lead Senator sponsor of S.2085, the Senate companion to H.R.943. “The best way to prevent an atrocity like the Holocaust from occurring again is through education. As we commemorate the recent 75th anniversary of the end of the Holocaust, the Never Again Education Act will give schools needed resources to cover one of the darkest chapters in our history. Through education, we can provide insight into the past, and use it to prevent anti-Semitism now. I’m glad to see my bipartisan legislation pass the Senate, and hope the President will swiftly sign it into law. I will continue working on policy solutions to fight back against hatred in whatever form it takes.”

“This critical, bipartisan legislation is a proactive measure to educate and provide states and schools with the resources necessary to incorporate Holocaust education into their classrooms, ensuring that all students understand the evils of Holocaust and its impact,” said Congresswoman Elise Stefanik (R-NY), lead cosponsor of H.R. 943. “I was honored to co-lead this bill through its passage in the House, and I applaud the Senate for passing it today to reaffirm Congress’ commitment to Holocaust survivors across our country. I am looking forward to the President signing this legislation into law.”

“The Never Again Education Act will provide the fundamental resources, education, and training for teachers and students and will encourage us to live in a world that respects religion, race, and human life,” said Congressman Don Bacon (R-NE), lead cosponsor of H.R. 943. “Anti-Semitism is increasing in our country. We must remember that the fight against anti-Semitism is an American endeavor and does not belong to Republicans or Democrats. As we recently commemorated the seventy-fifth anniversary of the end of World War II in Europe, one of the darkest chapters in human history, I thank the Senate for passing this vital legislation, and I am grateful to be a cosponsor and work alongside Rep. Maloney to push this bill through Congress. We must never forget so that “never again” will be the reality.”
“As we move into an era in which fewer and fewer Holocaust survivors are here to tell us their stories, it becomes more important than ever that we find ways to pass along their stories for them,” said Congressman Salud Carbajal (D-CA), lead cosponsor of H.R. 943. “This legislation empowers educators to ensure that a new generation of Americans learn the not-so-distant historical lessons of the Holocaust. I am proud to have cosponsored this legislation and encouraged by its passage by both the House of Representatives and the Senate”

“The Senate’s approval today of the Never Again Education Act is the latest milestone in the effort launched by Congresswoman Carolyn Maloney,” said Hadassah National President Rhoda Smolow and Hadassah CEO/Executive Director Janice Weinman. “Make no mistake: she identified the problem, wrote the legislation and built the bipartisan consensus necessary to deliver results – and for more than two years, Hadassah has been proud to rally behind her effort. It has been our honor to stand with the Congresswoman since day one of this journey. Hadassah congratulates her on this momentous occasion and looks forward to the day when her bill becomes law.”

“Even, in the era of COVID-19, we have seen an unprecedented wave of violent anti-Semitic attacks across the country and the sense of threat is universal. Holocaust education and specifically the Never Again Education Act is one legislative vehicle that will help alleviate this problem,” said Mark Wilf, chair of the Jewish Federations of North America Board of Trustees. “We are so pleased to have partnered with an extraordinary group of bipartisan leaders in the Congress who championed this important measure and secured its final passage. We particularly want to acknowledge the critical roles played by sponsors Representatives Maloney (D-NY) and Stefanik (R-NY) and Senators Rosen (D-NV) and Cramer (R-ND), as well as the leadership exhibited by Senators Rubio (R-FL) and Blumenthal (D-CT) and Representatives Bacon (R-NE), Hoyer (D-MD), and Scott (D-VA), who ensured final passage.”

“The United States Holocaust Memorial Museum educates people about how and why the Holocaust happened and why its lessons about the dangers of antisemitism and unchecked hatred remain critical today, especially as the Holocaust is receding in time,” said Diane Saltzman, the Museum’s Director of Constituency Engagement. “We appreciate Congress’s continued commitment to Holocaust education and remembrance.”

“I am grateful for the leadership of Representatives Carolyn Maloney and Elise Stefanik and Senators Jacky Rosen and Kevin Cramer and to all Senators for passing this bill today, during Jewish American Heritage Month, to ensure that the lessons of the Holocaust will be passed from one generation to the next,” said ADL CEO Jonathan A. Greenblatt. “Through the study of the Holocaust, students can grow as responsible citizens in a democratic society and develop critical thinking, empathy, and social justice skills for the future. We look forward to President Trump signing the bill into law and to working closely with teachers and districts across the country to ensure that Holocaust education is uniform and consistent across the country.”

Calling Out the CCP for the Wuhan Virus