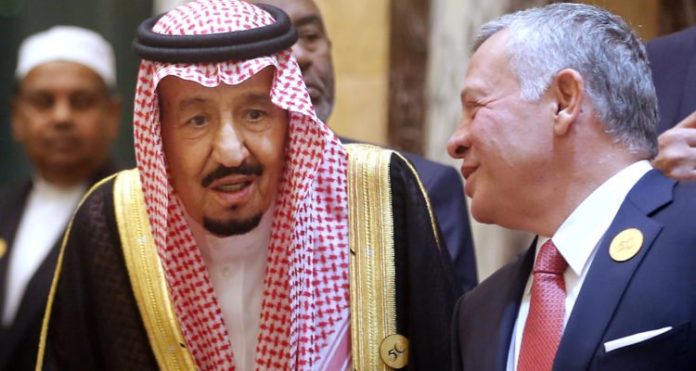 “The kingdom denounces any unilateral actions, and any violations of internationally- sanctioned resolutions or any measures that might undermine the chances of resuming the peace process to achieve security and stability in the region,” a statement by the Saudi Ministry of Foreign Affairs said as quoted by Saudi Press Agency.

The statement stressed the Kingdom’s complete “rejection of Israeli measures and plans to annex Palestinian lands in Judea and Samaria and impose Israeli sovereignty over them.”

The ministry also reaffirmed its “steadfast stance” towards the “brotherly Palestinian people” and its support of their choices.

Jordanian Prime Minister Omar al-Razzaz took it a step further by saying all agreements with Israel will be re-evaluated if the Jewish State proceeds with annexation.

“We will not accept unilateral Israeli moves to annex Palestinian lands and we would be forced to review all aspects of our relations with Israel,” al-Razzaz told Jordan’s Petra news outlet.

In an interview with Germany’s Der Spiegel last week, Jordan’s King Abdullah II threatened “If Israel really annexes the Judea and Samaria in July, it would lead to a massive conflict with the Hashemite Kingdom of Jordan.”

Abdullah claimed he didn’t “want to make threats” related to backing out of the peace treaty that Jordan signed with Israel in 1994, adding that Amman was aligned with “countries in Europe and the international community” whose foreign ministers are committed to blocking Israel’s declaration of sovereignty over the territory.

Jordan’s peace treaty with Israel remains deeply unpopular in the Kingdom, where the majority are of Palestinian origin. Jordan and Israel have close security ties but frequently clash over Israel’s regional policies.

The Palestinian Authority has already taken steps to end its security coordination with Israel due to the annexation plan.