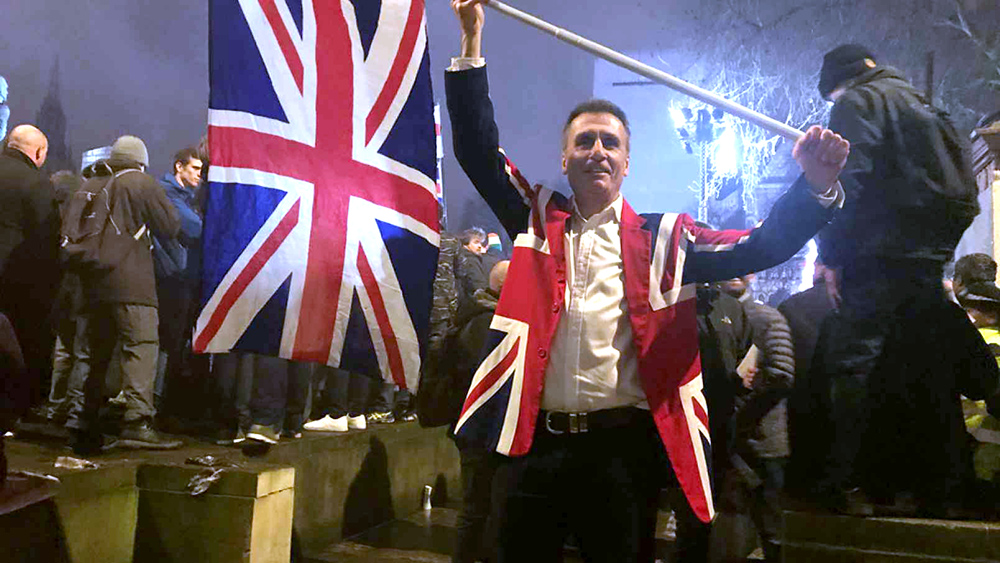 They came in their hundreds. Some draped in the flag, others dressed in red, white and blue, these brave Brexiteers heading for Parliament Square in London to celebrate the moment Britain would formally leave the European Union at 11 p.m. on January 31, 2020. Photo Credit: Front Page

As much as we were all together, something was missing

They came in their hundreds. Some draped in the flag, others dressed in red, white and blue, these brave Brexiteers heading for Parliament Square in London to celebrate the moment Britain would formally leave the European Union at 11 p.m. on January 31, 2020.

I watched them make their way together, understanding their need to feel comforted by each other, like exhausted worker bees making their way back to the hive in the rain.

In the shadow of Big Ben, we sang “Rule Britannia” and “Land of Hope and Glory” with flags aloft in the chilly night air. I thought of others just like us: Italians rallying for Salvini; American patriots standing endlessly in line for Trump. The real power of populists is felt most strongly in moments just like these, standing together against the system, momentarily feeling like we belong.

The system looked on. In the gloom the Parliament building seemed more foreboding, Brexit leader Nigel Farage acknowledging its presence as the real reason we were all gathered here. We were forced into this fight because those who were elected to represent us simply refused to do so.

For close to four years, British politicians denied the will of the people. We came perilously close to never realizing Brexit at all.

On the big screen, our struggle for independence played out, the crowd booing footage of Tony Blair but cheering wildly for Margaret Thatcher. I wanted to put all these people in my pocket and take them home with me. These are my people, decent Brits who love their country and all we used to be.

But as much as we were all together, something was missing. It was the same feeling you get when you climb the stairs but forget what you were going for. What was I doing here again? Why did I come?

And then the jarring realization: what we came for could not be delivered.

But we could not. This was not the end and we knew it. Our adversaries are all still there: the system, the media, Remainers, globalists, and self-serving politicians. And many of these are now hardwired for something that feels like revenge.

Gathered here in the mud and rain, perhaps we also allowed ourselves a moment of weakness, a kind of confessional that this has been really brutal with scars of the fight across all. We are nursing bruises from families divided, children fallen silent, Christmases made awkward, and the loss of friends.

A UKIP flag thrust defiantly into the air is a reminder that some of these injuries have been self-inflicted — blue on blue. Decades of work by original Leave supporters thrown under a bus by Farage and his thoroughly-sanitized Brexit Party. A lady with a UKIP badge tells me she is here to pay respect to the stoicism of the Brits, but leaves before Farage speaks to avoid having to endure his ego. The absence of the Prime Minister–mere meters down the road from this place — underlining his own refusal to acknowledge Farage or those with whom he associates.

We have suffered far beyond these personal or parochial injuries: the politicians, elected by us but unwilling to represent us; the lawyers, interpreting law to block Brexit and suit their partisan beliefs; teachers schooling our children that Leave was the wrong answer and that all Brexiteers are racists.

“I do feel ashamed” a man said to his wife as they waited outside a theater, watching Brexiteers draped in their British flags outside the pub across the road. And that is the truth of the other side. They are ashamed of Brexit Britain and all those who support it. During the evening a small group cyclists peddled around those gathered in Parliament square, ringing their bells shouting “Nazi scum!”

The speakers did their best but none managed to lift the crowd in the way we wanted, or needed. Many were ill-prepared, seeming to forget they were here for the crowd — not to be indulged by them. These exhausted worker bees made Brexit happen. Those on the stage seemed drunk on their honey.

This crowd needed the kind of Trump rally I have seen, a chance to feel triumphant, to feel strengthened by tough leadership and to be lifted up. They needed refueling with patriotic pride. But those on stage were too busy enjoying their last day in the office.

We will need to look to Boris Johnson for this now.

We can now say we have recaptured our sovereignty, can control immigration, create free ports, liberate our fishing industry, strike free-trade deals and simply make laws which benefit the people of this great country.

The Prime Minister feels it too. This is not the end.

I walked away quietly, watching mainstream news crews try to pick off the most drunk or incoherent of us to humiliate for their TV shows in the morning.

Katie Hopkins is a British media personality, columnist, former businesswoman and one of the U.K.’s leading freedom fighters. Visit her on Twitter: @KTHopkins and email her at: [email protected].