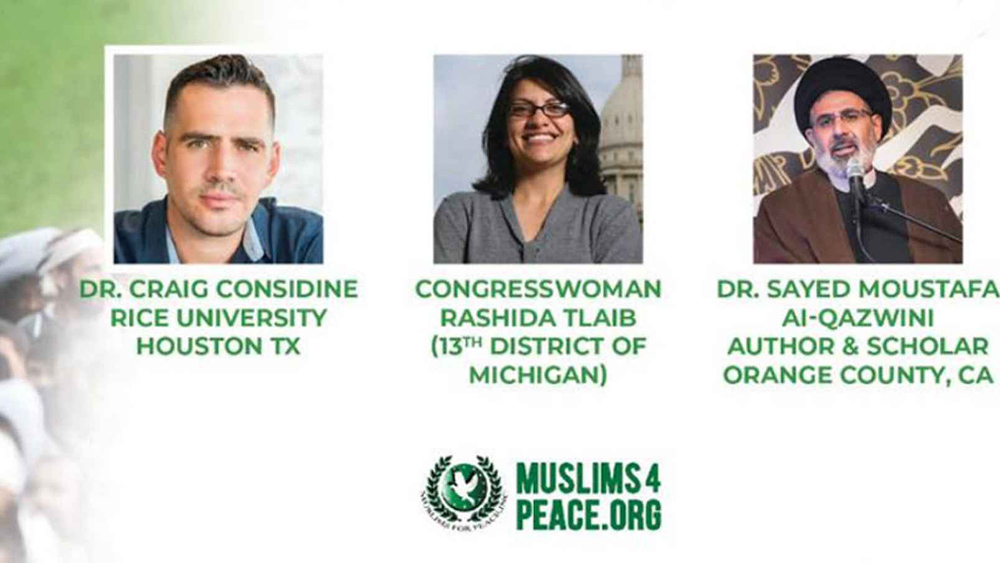 The speakers were Rep. Rashida Tlaib, who had just falsely accused Jews of a blood libel, Craig Considine, a Catholic apologist for Islam who supports BDS, and Imam Sayed Moustafa Al-Qazwini, an Iranian-trained Shiite cleric who had accused Israel of being behind ISIS.

This panel of Jew hatred was a project of Muslims 4 Peace promoting Islamic migration. But the founder of Americans Against Anti-Semitism instead showed up to ask them some tough questions about hate.

“What about your anti-Semitism?” Dov Hikind, a former elected Democrat official who now takes on anti-Semitism in his former party, challenged Rep. Tlaib as she declaimed about racism in America.

Hikind was immediately confronted by a man in a keffiyah. Rutgers police officers surrounded the founder of Americans Against Anti-Semitism and escorted him out of the room for asking an elected official about anti-Semitism at a state university funded by the taxpayers of New Jersey.

The “Interfaith” Mohammed conference had consisted of two Muslim panelists and one token Christian who spends much of his time promoting Islam and bashing Israel.

There had not been a single panelist of another religion.

The agenda of the conference was promoting migration “from Syria, Afghan, Somalia, Sudan, Myanmar, and Latin America”. All but the last region on the list produces Muslim migrants.

The conference materials whitewashed Mohammed’s ethnic cleansing of Jews by claiming that the, “Prophet Muhammad historically has been known to assist migrants who have escaped religious persecution when they fled from Mecca to Medina.” In reality, Mohammed had turned the Jewish population of Medina into corpses, slaves, and refugees. The sex slavery practiced by ISIS began with its prophet and Jewish women and girls were among the first victims of the original Islamic conquests.

The irresponsible decision by Rutgers to allow a fake interfaith conference by bigots whitewashing ethnic cleansing and anti-Semitism was as disgusting as it was predictable. The college has an ugly history of aiding and abetting hatred of Jews on campus by organizations advocating for Muslims.

In 2018, the Trump administration, through the work of Kenneth L. Marcus, reopened the old 2011 case against Rutgers University that the Obama administration had buried. Hatem Bazian, the godfather of campus anti-Semitism, had brought his Never Again for Anyone tour to Rutgers. And when Jewish students and Holocaust survivors came to see what it was about, the “free event” began allowing Muslims and anti-Israel activists in keffiyahs to enter for free while charging Jewish attendees fees.

Jewish students wearing yarmulkes were reportedly banned from an event at a state university.

The Obama administration shut down the investigation despite the presence of an email from the event organizer reading, “We need to start charging because 150 Zionists just showed up!” It also mentioned that, “if someone looks like a supporter, they can get in for free.”

Democrats had bitterly fought the appointment of Marcus as Assistant Education Secretary for Civil Rights for eight months precisely because they wanted to prevent him from looking into campus hate.

Every single Senate Democrat had voted against this respected activist against anti-Semitism.

In response to the reopening of the investigation, a university spokesman had insisted that, “There is no place for anti-Semitism or any form of religious intolerance at Rutgers.” But the reality is very different.

The Jew hatred problem at Rutgers goes back decades. And it shows no signs of going away.

The Rutgers faculty has been a hive of hate and utterly bizarre outbursts of support for terrorism.

Rutgers University professor Jasbir K. Puar, a Graduate Director of Women’s and Gender Studies, had engaged in an academic blood libel by claiming that Israel harvest organs from dead terrorists.

Puar explicitly endorsed terrorist violence against Jews, stating, according to a transcript, “We need BDS as part of organized resistance and armed resistance in Palestine as well.”

Rutgers prof Deepa Kumar, who had made headlines for claiming that America is worse than ISIS, is also a BDS supporter who regularly participates in SJP events, and has tried to excuse Hamas.

Hooshang Amirahmadi, a Rutgers prof running the American-Iranian Council, had even attempted to run for President of Iran, and was under NSA and FBI surveillance.

Nor have Anti-Semitism scandals stopped Rutgers from bringing more of the same on board.

Shehnaz Abdeljaber remains the outreach coordinator for Rutgers’ Center for Middle Eastern Studies despite having called a Jewish columnist, a “Zionist pig”, and allegedly physically threatened him.

“I’d be happy to see him beat with a crowbar. Violence doesn’t solve problems but it shuts up people who shouldn’t speak,” another Rutgers student had also threatened the Jewish student.

But the Dean of Students at the university had refused to take action.

Finally, in 2017, Rutgers took action against a professor who had posted anti-Semitic alt-right cartoons, called Judaism, “the most racist religion in the world,”, and endorsed BDS against Israel. The food science prof had also posted vile insults against First Lady Melania Trump and Ivanka Trump.

The David Horowitz Freedom Center had listed Rutgers as one of the top ten universities friendly to terrorism largely due to the hateful faculty and active presence of SJP Rutgers, the campus chapter of a national hate group founded by the aforementioned Hatem Bazian. SJP Rutgers members have harassed Jewish students and engaged in overt anti-Semitism. A particular low point came when the Daily Targum, the campus paper, was under SJP control, and printed an editorial attacking a Hillel building, and asking, “As a non-Jewish person, does the Jewish nature make you feel welcome?”

In response to the backlash, Amani-Al-Khatahtbeh, an SJP activist, falsely claimed that Jews were “politicizing the word ‘anti-Semitism’ to silence criticism of Israel.”

Incidents like these helped explain why a Brandeis report found that not only did a majority of Jewish students see the campus atmosphere as hostile to Israel, but 1 in 4 saw it as a hostile environment toward Jews, and 1 in 10 had experienced anti-Semitic slurs at Rutgers University in person.

This latest incident is an unfortunate reminder that nothing at the state school has truly changed.

Rutgers University has a long and unfortunate history of anti-Semitism. And allowing it to be used as a forum for bigoted figures with a history of hateful conspiracy theories about Jews to whitewash the ethnic cleansing of Jews adds another ugly chapter to a history that has gone on for too long already.

After Israeli rescuers tried to revive a Muslim boy who had fallen into a reservoir, Rep. Rashida Tlaib retweeted a false claim that Jews had kidnapped the boy and had thrown him in a “water well.”

After the anti-Semitic shooting at a synagogue in Poway, an appearance by Tlaib was cancelled in Poway. Rutgers had the opportunity to do the right thing, instead it went ahead with a misleadingly billed “interfaith” event featuring bigots who have spread conspiracy theories about Jews and Israel.

And the Muslims 4 Peace event climaxed with the eviction of an activist against anti-Semitism because he had dared to ask Tlaib about her latest anti-Semitic smear. That’s just the way it is at Rutgers.

And that’s why the Department of Education civil rights investigation of Rutgers is so necessary.