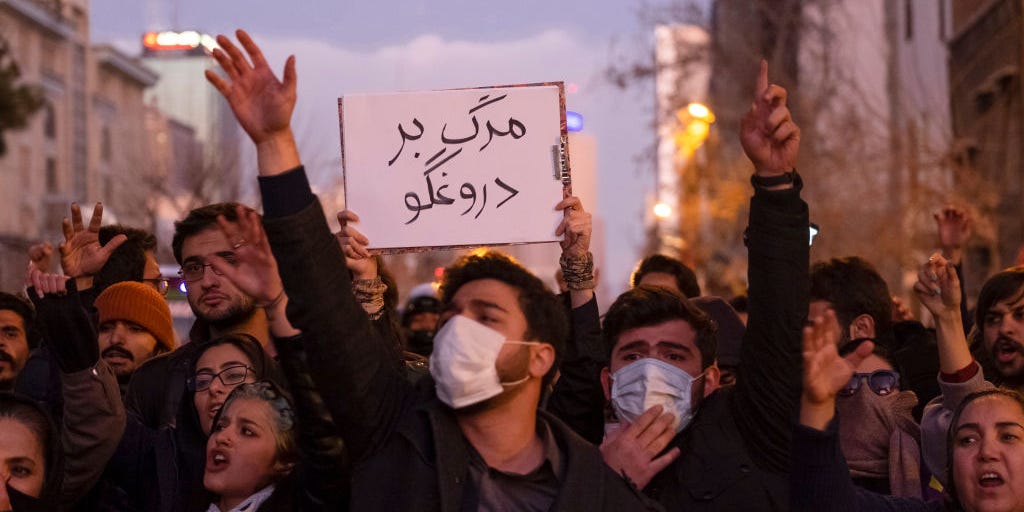 Iranians shout slogans as one of them holds-up a placard with a Persian script that reads, Death To The Liar, during a gathering to mark the victims of the Ukraine Boeing 737 passenger plane, in Tehrans business district on January 11, 2020. Photo Credit: Morteza Nikoubazl/NurPhoto via Getty Images

President Trump has tweeted his support to the people of Iran, saying “I’ve stood with you since the beginning of my Presidency.”

In a show of solidarity with the people of Iran against the regime, Trump tweeted: “To the brave, long-suffering people of Iran: I’ve stood with you since the beginning of my Presidency, and my Administration will continue to stand with you. We are following your protests closely, and are inspired by your courage.”

Hundreds of Iranian protesters demanded Iran’s Supreme Leader Ayatollah Ali Khamenei step down on Saturday after Tehran admitted that its military had mistakenly shot down a Ukrainian plane, killing all 176 people on board.

In Tehran, protesters gathered near universities and called for the resignation of Supreme Leader Ali Khamenei and chanted, “Down with liars!” and “Death to dictator!”

Saturday’s demonstrations came two months after Iran cracked down on massive anti-government protests, brought about by an increase in the price of subsidized gasoline in November. Iran declined to release a death toll at the time, but Amnesty International said more than 300 people had been killed.

IRGC aerospace commander Amir Ali Hajizadeh said on state television, “I take full responsibility and I will obey whatever decision is taken.” He said he “wished” he “were dead” when he learned about the fate of the aircraft.

“That night we had the readiness for all-out war,” Hajizadeh said. He added that the Revolutionary Guard had asked that commercial fights be canceled but that the request was not granted.

In Tehran, demonstrators gathered at Amirkabir and Sharif universities, where some called for the resignation of their country’s leaders, according to the semiofficial Fars news agency, which is affiliated with the IRGC.

At a vigil Saturday, crowds gathered at Sharif University of Technology in Tehran chanted, “Down, down, Khamenei,” according to The Washington Post.

Some videos shared on social media showed protesters shouting, “Death to liars!” and “Death to the dictator!,” according to The New York Times.

VOA’s Persian news service reported protests also spread to other areas of Iran, including the country’s third-largest city of Isfahan. Protests were also reported by Reuters and the BBC.

In Isfahan, protesters chanted, “Khamenei is a murderer and his rule is not legit.”

Near Amirkabir University, a vigil earlier Saturday turned into a protest, with people chanting, “Our hands are bare so don’t show us your truncheons.” Social media reports said police broke up the demonstration with tear gas.

British Foreign Secretary Dominic Raab said, “The arrest of our ambassador in Tehran without grounds or explanation is a flagrant violation of international law.

“The Iranian government is at a crossroads moment. It can continue its march towards pariah status with all the political and economic isolation that entails, or take steps to deescalate tensions and engage in a diplomatic path forwards,” Raab said.

State Department spokeswoman Morgan Ortagus tweeted about the detainment: “This violates the Vienna Convention, which the regime has a notorious history of violating. We call on the regime to formally apologize to the UK for violating his rights and to respect the rights of all diplomats.”

The U.S. called on Iran to apologize to Macaire, who was reported to be “safe and well” after being released from custody. (VOA News)