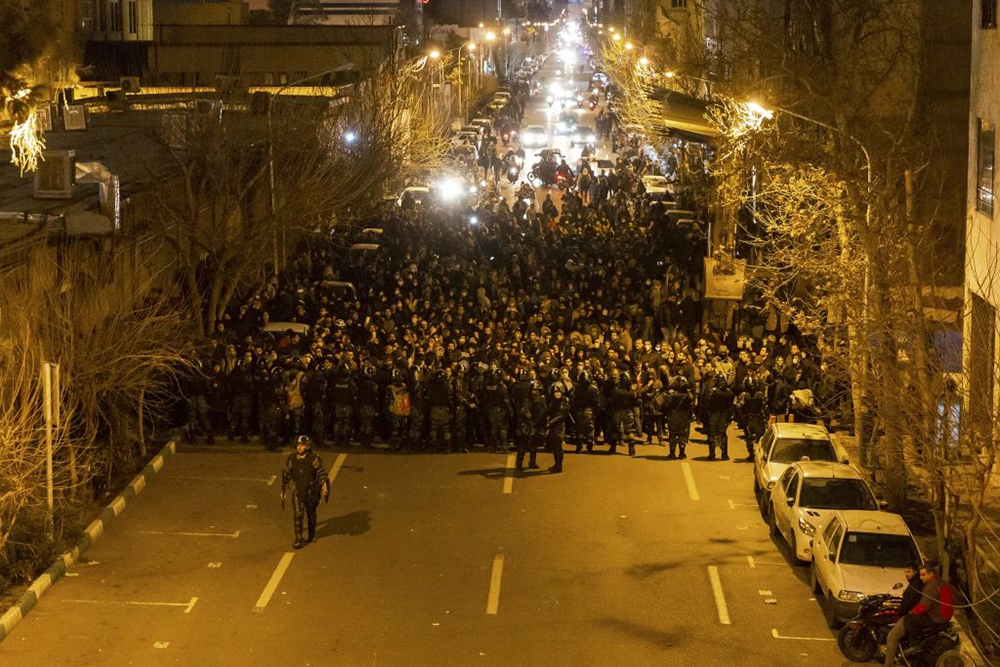 The latest protests in Iran are clearly focused on a demand for regime change, even by some former "reform-seekers". All this means that the regime's classical recipe for survival isn't working as before. Pictured: Riot police stand face off against anti-regime protesters in front of Amir Kabir University in Tehran, Iran on January 11, 2020. (Photo by Getty Images)

No matter what gloss the ruling clerics might try to put on current events in Iran, one point is clear: their Islamic Republic is in trouble. Deep trouble.

This is, of course, not the first time that the system hastily put together by a bunch of mullahs and their leftist allies hits a bump on its road to nowhere. Even in its first year the Islamic Republic faced huge protest movements in Tehran and other major cities and had to use force to crush rebellions by Iranian-Kurdish and Turcoman communities.

According to best estimates, to remain in place the Islamic Republic has executed more than 15,000 people and driven more than 8 million Iranians into exile. And all that not to mention the eight-year war that the late Ayatollah Ruhollah Khomeini provoked with Iraq under Saddam Hussein. Despite all that the regime managed to survive, thanks to a number of factors.

The first of those was that the Islamic Republic had at its disposal a large amount of cash earned from oil exports. The steady rise in oil prices meant that in its first 30 years of existence, the Islamic Republic earned more than 20 times the money that Iran had made ever since it started exporting oil in 1908.

That ready source of cash meant that the new rulers of Iran did not need the citizenry for any of the ordinary things citizens in normal countries are needed for. The government did not depend on the people for revenue through taxation.

At the same time, it did not need citizens to win elections, as candidates were approved beforehand. Nor did the government need the citizens to work to keep the economy going. Over four million refugees from Afghanistan, Iraq and former Soviet Azerbaijan provided a huge source of cheap labor.

When it came to needing citizens to fight for the regime, citizens were again not indispensable as the regime succeeded in hiring mercenaries in a number of neighboring countries, notably Afghanistan, Iraq, Syria, Yemen and Lebanon.

It was that scheme of proxy wars that turned the late General Qassem Soleimani into a hero of the Islamic Republic. In fact, Soleimani did not need any military expertise. All he needed to do was to act as a cash machine for his proxy warriors.

Today, however, the oil cow is giving the mullahs much less milk than before. In fact, the regime’s hope is to secure around USD $60 billion a year to cover its basic expenses. The existing war chest, built over the years, won’t cover those basic expenses for more than a year from now.

The other important element in the regime’s strategy was certainly that, whatever it did at home or abroad, its putative foes, preferring dialogue and compromise, would always shy away from taking strong action.

Tehran always knew that whatever it did against outside powers, it always had the option of surrendering at five minutes to midnight. Today, that option is also fading. I doubt that even the lily-livered Europeans would now settle for just a friendly smile and a promise of future good behavior from Tehran. President Hassan Rouhani and his “New York Boys” may still hope to see a Democrat in the White House soon. But even if that happens, I doubt that any future US president would repeat the mistakes made by President Barack Obama.

Even an opportunistic power such as Russia is no longer prepared to play the game according to the rules fixed by the mullahs. The mullahs’ total disregard for international law and norms of behavior, tragically demonstrated with the shooting down of the Ukrainian jetliner in Tehran, makes it hard for even dyed-in-wool anti-Americans in the West and elsewhere to continue as apologists for an incompetent, corrupt and cruel regime.

The next item in the mullahs’ scenario was to wrap themselves in patriotic colors and demand that Iranians forgive their peccadillos in the name of raw nationalism. Rouhani’s closest associate Muhammad Javad Zarif, acting as foreign minister, often uses tropes such as, “Iran’s 7,000-year civilization” and claims that “we were masters of the world long before Americans appeared on the map.” However, that trick isn’t working either. Most Iranians, including many regime apologists in the West, know that the regime’s core ideology, Khomeinism, is built on a profound hatred of all things Iranian.

The mullahs’ recent attempt at marketing Gen. Soleimani as an Iranian hero, a kind of nationalist icon, has proved a failure as posters lamenting his demise are torn down and/or effaced by protesters in the country.

Soleimani was a cash-dispensing machine that never asked Iranians for permission to spend their money abroad. The scheme he ran was never discussed anywhere, even in the regime’s own institutions, let alone any public forum. Nor was he answerable to anyone but “Supreme Guide” Ali Khamenei who, if Soleimani’s only press interview is believed, never bothered to go into any details.

Another feature of the regime’s survival scenario was to foment false hopes by fielding supposedly “reformist” figures capable of replacing the regime’s frown with a smile to please some Iranians and many gullible foreigners. Today, however, that trick is also hard to repeat, especially as more and more players in the “reform-seeking” game realize that they have been taken for a ride.

When everything else failed, the mullahs knew that they could hang onto power by mass killings and widespread arrests. Each time they used that trick they managed to buy a few more years. This time, however, may be different. The current wave of protests was launched just days after the crushing of the previous national uprising. The previous round of protests seemed divided between a demand for straight regime change or a demand for cosmetic moves, including the resignation of top officials.

The latest protests, however, are clearly focused on a demand for regime change, even by some former “reform-seekers”. All this means that the regime’s classical recipe for survival isn’t working as before. For the first time, more and more Iranians are beginning to contemplate regime change not as merely a desirable slogan but as a practical strategy to lead the nation out of the impasse created by Khomeinism.

Amir Taheri was the executive editor-in-chief of the daily Kayhan in Iran from 1972 to 1979. He has worked at or written for innumerable publications, published eleven books, and has been a columnist for Asharq Al-Awsat since 1987. He is the Chairman of Gatestone Europe.

This article was originally published by Asharq al-Awsat and is reprinted by kind permission of the author.