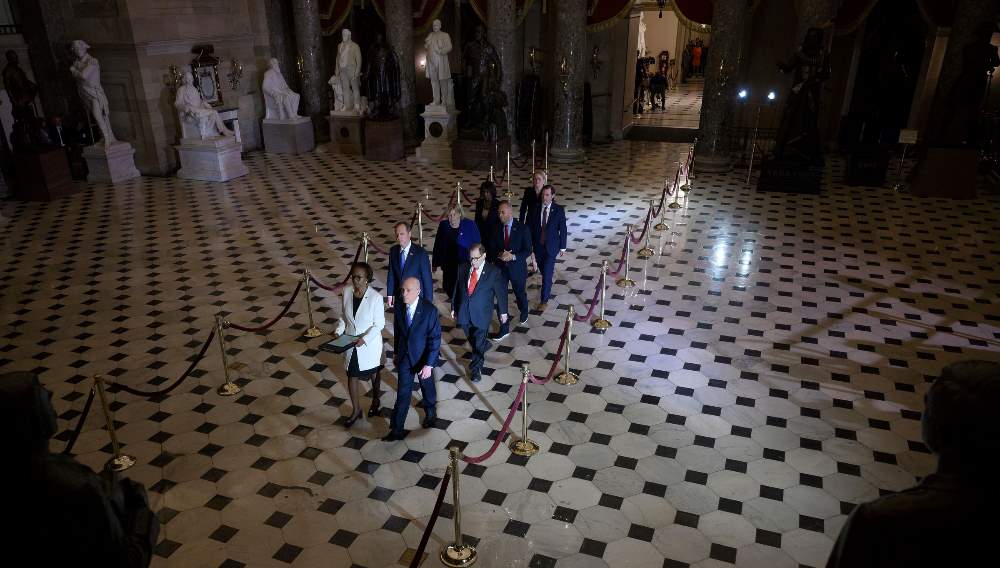 The impeachment managers — lawmakers who will act as prosecutors — joined the House clerk and sergeant at arms, who hand-carried the articles to the Senate chamber. Senate Majority Leader Mitch McConnell said the formal acceptance will not to take place until Thursday. Photo Credit: Getty Images

Speaker of the House Nancy Pelosi has signed the articles of impeachment against President Trump and delivered them to the Senate so a trial can begin next week.

Pelosi used a number of pens to put her name on the documents and handed them out to various Democratic committee chairmen whose efforts have led to the president’s impeachment.

The impeachment managers — lawmakers who will act as prosecutors — joined the House clerk and sergeant at arms, who hand-carried the articles to the Senate chamber. Senate Majority Leader Mitch McConnell said the formal acceptance will not to take place until Thursday.

At that time, Chief Justice John Roberts, who will oversee the trial, will be sworn in and then he will swear in the impeachment managers.

The House impeached Trump last month on charges of abuse of power and obstruction of Congress. But Pelosi put off submitting the articles of impeachment as House Democrats tried to get Senate leaders to agree to allow testimony from new witnesses during the trial.

McConnell has resisted calling witnesses, saying that decision would come later in the trial.

“She failed and the naming of these managers does not change a single thing,” Grisham said in a statement. “President Trump has done nothing wrong. He looks forward to having the due process rights in the Senate that Speaker Pelosi and House Democrats denied to him, and expects to be fully exonerated.”

Pelosi said if the Senate launches the trial without witnesses, the American people will see it “as a pure political cover-up.”

“McConnell and the president are afraid of more facts coming to light,” she said.

The trial will begin Tuesday and will likely last several weeks.

Trump is accused of abusing his power by pressuring Ukraine to investigate former Vice President Joe Biden and his son, Hunter Biden, who served on the board of a gas company in Ukraine, as Trump withheld $391 million in military aid that he later released. The president is also accused of subsequently obstructing a congressional probe into his actions.

Trump insists he did nothing wrong and has dismissed the impeachment effort as a “witch hunt.”

“While we’re creating jobs and killing terrorists, Democrats in Congress are wasting America’s time with demented hoaxes and crazy witch hunts,” he told supporters at a Tuesday night campaign rally.

No matter what rules are in place for the Senate trial, Trump seems to be safe from the prospect of being convicted and removed from office.

His Republican Party holds a 53-47 majority in the chamber, and conviction requires a two-thirds majority, meaning if all Democrats voted to convict, then 20 Republicans would have to also vote that way for Trump to be convicted and removed from office.

The evidence includes a handwritten note from Parnas on stationery from the Ritz-Carlton Hotel in Vienna that says “get Zalensky (sic) to Announce that the Biden case will be investigated.”

Also disclosed was screenshot of a previously undisclosed letter Giuliani sent in May to the then-president-elect, introducing himself as Trump’s “personal counsel” and requesting a meeting with Trump’s “knowledge and consent.”

Communications between Parnas, Giuliani and others about the firing of U.S. Ambassador to Ukraine Marie Yovanovich, who balked at Trump’s demand for an investigation of the Bidens, were also released.

This is the third time in the country’s 244-year history a U.S. president has been impeached and targeted for removal from office.

Andrew Johnson in 1868 and Bill Clinton in 1998 were both impeached by the House but acquitted in Senate trials. A fourth president, Richard Nixon, resigned in 1974 in the face of certain impeachment in a political corruption scandal. (VOA News)