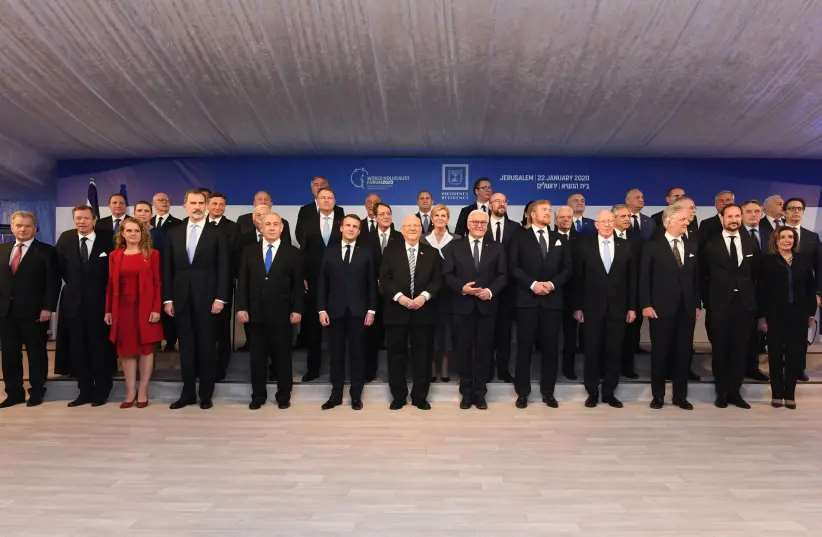 Over 50 world leaders came to Israel, for the Fifth World Holocaust Forum. The event, entitled “Remembering the Holocaust: Fighting Antisemitism,” was held at Yad Vashem. This year marks the 75th anniversary of the liberation of Auschwitz-Birkenau.  (Photo Credit: KOBI GIDEON/GPO)

They come, they cry, they pay homage, and they leave. And where do they go back to? To places where anti-Semitism is growing by leaps and bounds. Where Jews are endangered once again.

They, are the over 50 world leaders, including Putin and Pence, coming to Israel, for the Fifth World Holocaust Forum. The event, entitled “Remembering the Holocaust: Fighting Antisemitism,”at Yad Vashem. This year marks the 75th anniversary of the liberation of Auschwitz-Birkenau.

Neither they, nor most Jews have learned much in those 75 years.

This event at Yad Vashem, comes after some hundred parliamentarians from across Europe gathered at Auschwitz this week, and were urged by the Brussels based European Jewish Association, and the Action and Protection League of Europe, to toughen anti-Semitism laws in their countries.

They need to be urged?

They participated in a two-day program. Day one, they took part in a symposium in Krakow, and a gala dinner.

Of course, what’s a commemoration of genocide against the Jews, without a party?

The meetings and dinner speeches, addressed the need for increased Holocaust education in Europe, a strengthened commitment to passing national legislation to fight hatred towards Jews, and outlaw the sale of Nazi memorabilia. Followed by a visit to Auschwitz-Birkenau, and memorial service, on day two.

Thanks to the internet and modern social media, Judeopathy is more globally pervasive today than in the 1930s.

One only needs to mention attacks on Jews in recent years in Pittsburgh, Poway, Brooklyn, Jersey City, Monsey, Toronto, Paris, Prague, London, Berlin, Buenos Aires, Moscow, Amsterdam, Istanbul, Uman, and on, and on, and on…

Do I make my point?

For example, the number of attacks on Jews and anti-Semitic vandalism, reported to the police in France, surged 74% in 2018.

There’s also been a meteoric rise in anti-Semitic incidents across the United States in recent years. The Anti-Defamation League reported a 58% increase in such incidents, between 2016 and 2017, many of them in schools or on college campuses.

And, in November 2019, the FBI released data, that showed that Jews and Jewish institutions, were the overwhelming majority of targets, of religion-based hate crimes in 2018, as they have been every year since 1991, in America.

The stigma of the Holocaust is over. Anti-Semites openly voice their views. Judeopaths are free to roam wild. Jews and Israel are no more cut any slack. The killing season has started again. Little has been done to curb it. So, politicians worldwide, will do what they do so well, pay lip service.

In this World of Illusion and falsehood, selfies rule supreme. Mourning some dead Jews, spouting some trite lines, laying a wreath at Yad Vashem, and making sure the media sees you virtue signaling the right thing, is what counts.

Jews should work with friendly non-Jewish allies and the authorities in various countries, BUT, Jews shouldn’t put all their trust in them, to protect them. If we learned nothing from the 1930s and 1940s, at least Jews should have learned the importance of active self-defense, as permitted to the full extent of the law wherever they reside.

So, what about the Jews? What have they learned in 75 years?

Well let’s look at America for example. In America they’ve learned to build Holocaust museums, memorials, and to promote educational programs in schools, to raise awareness about the Holocaust and the evils of anti-Semitism.

Is it working? It doesn’t seem so, since anti-Semitic attacks are up up up.

Who hasn’t read about the Holocaust memorial or synagogue defaced…

Who hasn’t read about the Jewish child in school, abused by his or her peers, AFTER a Holocaust lecture or movie was shown. Swastikas appear on lockers, or in bathroom walls, etc. It happens, sorry to say, quite frequently.

What about promoting Jewish self-defense awareness? With so many attacks on Jews, in synagogue, at Jewish centers, kosher groceries, or just walking down the street, it seems reasonable. Jews should be arming themselves to the full extent of the law.

It’s well known that a shooting or stabbing attack is shortened, and casualties minimized, with the introduction of a second weapon. Israel has seen that often, not just police or soldiers, but also armed Jewish civilians have stopped Arab shooters, stabbers, and attempted car rammings.

But, guess what, in America, Jews are proportionately more vocal and active in promoting gun-control than the general population.

Lest you say that’s only liberal and more secular Jews (who are a clear majority of Jews in America); only days after the Monsey attack on Hasidim last Hanukkah, members of the same community that was attacked, spoke out against taking up weapons.

A writer and activist from Monsey, Shimon Rolnitzky wrote:

“And we must be wary of those who say that guns are the answer. From the time that Haredi children are very small, we learn to despise weapons…They educated us to be pacifists and talked to us about how nice it will be when the Messiah comes, when “nation shall not lift the sword against nation, neither shall they learn war anymore.” (Isaiah 2:4).

“The great majority of Haredi Jews do not want to take up weapons. Jews who come to the Hanukkah lighting of their Rebbe, like those who had to struggle against a murderer with a big machete on Saturday night, are generally the type of people not to kill a fly. I still remember when I brought home a toy gun for Purim and my mother took it, saying that “Jews don’t have a use for guns.”

It seems that even after the Holocaust, and with increasingly violent attacks in America and elsewhere, Jews still haven’t learned the lesson of active self-defense.

Yet, Hanukkah celebrates the military victory of the Jews against the Seleucid Greeks.

And, Purim celebrates salvation from a genocidal decree. Not only did the king hang Haman and his ten sons, but the Jews killed 75,800 “Nazi Party” members also… (Esther chapter 9).

I’m sorry to say that these Hasidim, don’t seem to have learned the lesson of Hanukkah or Purim either.

That’s the most important lesson to learn from Auschwitz, and what about Aliyah too!