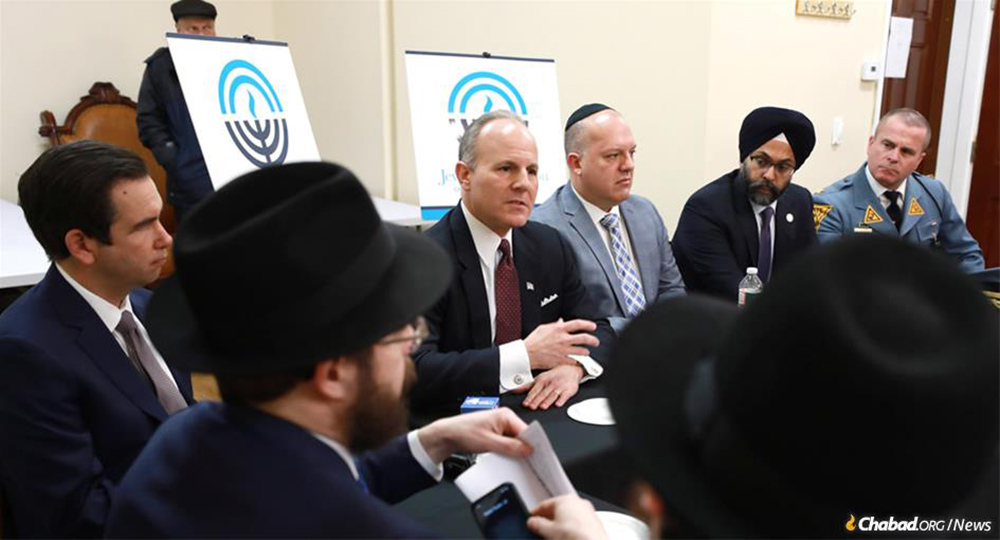 Elan Carr brings condolences to victims of the Dec. 10 attack and local residents 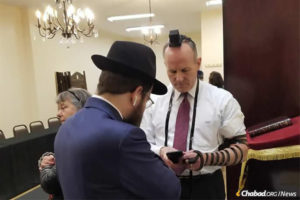 Rabbi Moshe Schapiro assists Elan Carr in putting on tefillin before the meeting.

Outside on Martin Luther King Drive, snow fell gently. Inside the JC Kosher supermarket, it looked like a war zone. The glass panels that just days ago were the entrance to the storefront were smashed and on the ground, shattered by hundreds of bullet holes. Food was strewn across the floor, the aftermath of the violence that took place on Dec. 10 in the once-peaceful community.

As a delegation that included Elan Carr, the Trump administration’s Special Envoy for Monitoring and Combating Anti-Semitism, made its way down the streets of Jersey City’s Greenville neighborhood, visitors and local residents paused to express their condolences to one another. An entire community is hurting.

They walked to the Ropshitz Shul, where a community forum took place with Carr, local residents and elected officials. 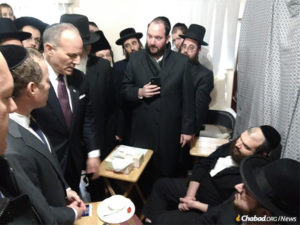 Carr comforts the mourners, including Moshe Ferencz, seated center, whose wife, Leah Minda, was killed in the attack. Her brother, Yoel Greenfeld, is seated next to Moshe Ferencz. (Photo: Mendel Super)

The pain at the meeting was palpable.

Rabbi Moshe Schapiro, co-director of Chabad of Hoboken and Jersey City with his wife, Shaindel, took the floor and spoke passionately about educating children to love others and having a moment of silence each day at school: “Parents must teach their children to think about what their purpose is here in this world. They should have a conversation, so when their teacher gives them a quiet moment to reflect, they should be focusing on this.”

Noting how parents must set the tone, Schapiro continued, “Wouldn’t it be amazing to have that kind of family dynamic where every child has the opportunity to think, ‘I can make a difference and make this world a better place?’ ” 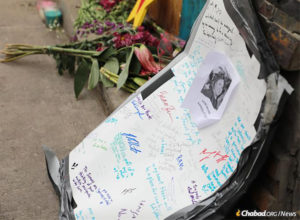 “Every child matters, and when someone looks different than us, it doesn’t take away from us because every human being has a mission to make this world a better place; the difference of the other child only adds to the dimension in a most amazing way.”

Addressing Carr, Schapiro remarked: “They call you the anti-Semitism czar. Maybe the title should be the ambassador of love!” 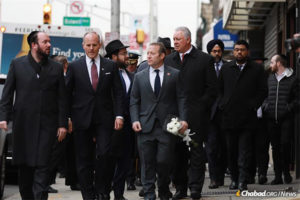 The delegation, including U.S. Congressman Josh Gottheimer, center with flowers, walks to the site of the attack. (Photo: New Jersey OAG)

After the meeting, the delegation headed several blocks away, to the site of last Tuesday’s deadly shooting, inspecting the damage to the bullet-ridden store. During a news conference held in the foreground of the store, Carr relayed sympathies on behalf of the Trump administration, saying, “I came to Jersey City today to express the personal condolences of the president of the United States, and the entire administration that stands in absolute solidarity with the Jewish community here in Jersey City, and with the entire Jersey City and New Jersey.”

“My message,” continued Carr, a veteran with almost two decades of military service, “is that we’re in the season of Chanukah, and Jews all over the world will be lighting Chanukah lamps, commemorating an occasion where Jews were victorious over those who would profane the holy. And that’s what this is; this act of savagery was to profane the holy. They just stepped into a kosher market, a place of service and faith, and I have not seen that many bullet holes since I left Iraq–I spent a year in a combat zone.” 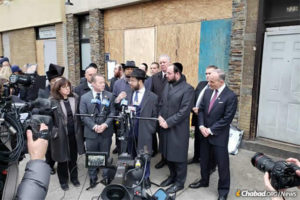 Before heading to the shiva house–where Moshe Ferencz is mourning his wife, Leah Minda Ferencz–Rabbi Schapiro said to the media: “The message the community has is, ‘We get along with our neighbors; this is an isolated incident.’ But unfortunately, it’s thriving all over the world. We see it in New York; we’ve seen it in Brooklyn in the last few months. People who look Jewish are attacked so often. The best way to fight hate–as the special envoy said so well–is with love, and the best way to fight darkness is with light.”

Concluding the press conference, Jason Shames, CEO and executive vice president of the Jewish Federation of Northern New Jersey, said emotionally, “One of the most difficult aspects of this experience for me is having to meet an 11-year-old boy who on his 11th birthday buried his mom, who was killed solely for being Jewish. He now will be saying the holy Jewish mourner’s prayer–the Kaddish. To have to learn that as an 11-year-old is a tragic, sad and horrific thing to do.” 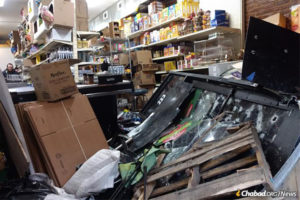 Inside the store: the shattered panes of the storefront, the address still visible. (Photo: Mendel Super)

Meeting the widower and family of Leah Minda Ferencz at their urban Greenville home, Carr heartfully wished, “My prayer is that this loss will bring the world to a better place; people should be kind and decent to one another, banish hate from their hearts and treasure the tzelem elokim—the humanity and G dliness within us.”

The Importance of Education

On Friday, at a meeting with elected officials and faith leaders from across the state, Schapiro echoed the words of the Rebbe—Rabbi Menachem M. Schneerson, of righteous memory—on the importance of educating children to lead a life of goodness and kindness, “We need to teach our children from a very young age that there’s a G d who created this very complicated world, and he continues to supervise this world. We, human beings created in his image, are accountable to G d; yes, many children get it at home, but kids spend most of their day at school. If we can start teaching our children that we are not living in a jungle, we can make this world G d’s garden, making it a better place. 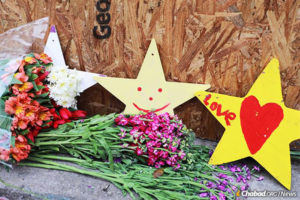 If children grow up hearing this message—knowing that we can’t harm anyone else, that our lives are sacred—hopefully, when they’re a little older that message they heard at home and at school will have an effect on them.”

The solution, Schapiro declared, is to go “back to the basics.”

On Monday, at pre-Chanukah menorah-lighting at the Governor’s mansion, Schapiro spoke of the importance of bringing prayer and faith into our lives, noting that the next night marks the 19th of Kislev, the New Year of Chassidut, which brought prayer to the fore. He told those assembled that it is not enough to pray in tragic circumstances; individuals must also bring G d into their lives when all is well.