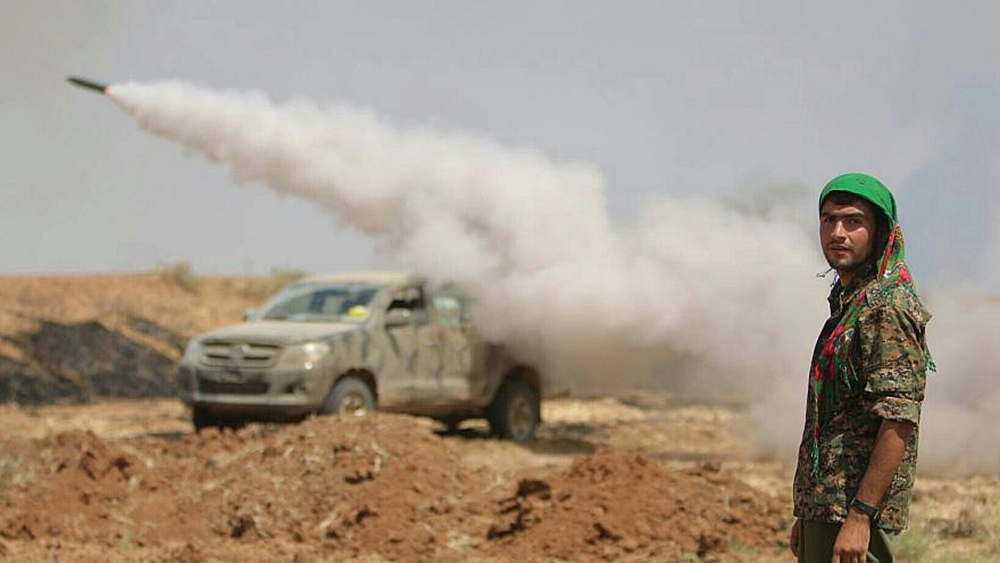 A U.S.-backed YPG fighter, a mainly Kurdish militia in Syria and the primary component of the Syrian Democratic Forces, Nov. 21, 2015. Credit: Wikimedia Commons.

Trump’s betrayal of the Kurds to the Turks doesn’t mean that he will also abandon the region to Iran. But Netanyahu and the Arab states have to be alarmed by the situation

In retrospect, no one should be shocked by the news that the United States has given the green light to Turkey for a military incursion aimed at sweeping Kurdish forces out of northern Syria. Trump has been very clear about wanting to cut and run from the conflict in Syria once the ISIS terrorists that he had vowed to defeat were beaten. Moreover, he campaigned for the presidency by promising to end U.S. involvement in the wars of the Middle East. Nor, as a general rule, has he demonstrated much sympathy with the plight of small nations and peoples who are threatened by their larger neighbors.

But while this desire to avoid American involvement in wars like the intractable conflicts in Iraq and Afghanistan lies at the heart of his “America First” foreign policy, there have always been two exceptions to his neo-isolationist instincts: Israel and Iran. The question now as the region assesses the long-term implications of the tragedy that is about to unfold in northern Syria is whether this will leave Israel, as well as the regional Arab states, to the tender mercies of Tehran and its allies the same way he has betrayed the Kurds after they proved to be courageous and invaluable allies in the struggle against ISIS.

Trump may think that the plight of the Kurds is simply not his problem. Yet he has demonstrated a real affinity for Israel, overturning seven decades of U.S. foreign policy, such as recognizing Jerusalem as its capital, moving the U.S. embassy there from Tel Aviv, annexing the Golan Heights and demanding accountability from the Palestinians for their support of terrorism and unwillingness to make peace.

Similarly, the president’s position on Iran flatly contradicted all of his other stands on the Middle East.

Trump railed against President Barack Obama’s 2015 nuclear deal with Iran as the worst bargain in history and made good on his vow to scrap it. He has reimposed economic sanctions on the Islamist regime with devastating effect on its ability to go on funding its terrorist. The goal of this “maximum pressure” policy is not merely to renegotiate a pact that essentially gave Iran a legal path to nuclear weapons, but also to halt its support of terrorism and its illegal missile program. Trump deserves praise for sticking to this line.

His stance on Israel and Iran were also identical to those of more traditional conservatives who were leery of his “America First” instincts on other fronts. But as Iran sought to escalate tensions in the region with attacks on shipping vessels in the Persian Gulf in order to scare the Europeans and the United States into thinking that war was the only alternative to a return to Obama’s deal, Trump refused to take the bait and respond militarily to their provocations. That wasn’t a mistake. Still, the fact that his decision not to retaliate for the shooting down of an American drone or to attacks on two major Saudi oil facilities seemed to have more to do with the advice of isolationists like Fox News commentator Tucker Carlson and Sen. Rand Paul (R-Ky.) than a sober assessment of the situation remains troubling.

Trump’s announcement about Turkey’s attack on the Kurds, however, puts those concerns in an even more worrisome context.

There is so much that is wrong with this decision.

Letting Turkey have its way in Syria at the expense of the Kurds isn’t just an atrocity in the making, but a huge gift to one of the worst actors in the region: Turkish President Recep Tayyip Erdoğan. Erdoğan and his Islamist party are working to destroy the last vestiges of Turkish democracy, rendering the country unfit for continued membership in the NATO alliance. He’s also a virulent anti-Semite and enemy of Israel, who would—if he is allowed more influence in the region—inflame the conflict with the Palestinians and undermine efforts to create an alliance between the Jewish state and the Arab regimes that are threatened by Iran. Nor is it possible to believe that this American favor to Turkey will cause Ankara to help isolate Iran.

Moreover, the betrayal of the Kurds isn’t just immoral. It strips the United States of any credibility for those nations that look to America as a counterweight to the influence of Iran and Russia’s efforts to recreate the old Soviet sphere of influence.

Trump’s promise that he will stop Turkey from abusing the Kurds is disingenuous. If he pulls out U.S. troops from the region, how will he keep his word? The answer is that he cannot, and his comments about Syria not being America’s fight give the lie to his assurances.

It’s in this light that several other reports from the region must be understood.

The fact that Israeli Foreign Minister Israel Katz is negotiating with several Gulf States on non-aggression cooperation is very good news and another sign that Israel’s isolation in the region is a thing of the past. The Gulf states, however, wouldn’t be considering this if they weren’t scared stiff that Trump will leave them on their own to face Iran.

Similarly, the news that Saudi Arabia is considering a rapprochement with its Iranian archenemy is another shocking development that has to worry Israel and the other Gulf States. While it’s hard to imagine those two nations being anything other than enemies, what Trump is doing in Syria is potentially comparable to Obama’s actions that caused the Arab world to stop thinking of the United States as an ally they could count on.

Trump is a volatile and inconsistent foreign-policy player, so this move doesn’t necessarily guarantee a betrayal of Israel on Iran. But by following the isolationist logic of “America First,” he seems to be repeating his predecessor’s mistake in bugging out of Iraq and once again appeasing Iran. That is a tragedy for the Kurds, for American honor and certainly for the rest of the Middle East.

Jonathan S. Tobin is editor in chief of JNS—Jewish News Syndicate. Follow him on Twitter at: @jonathans_tobin.