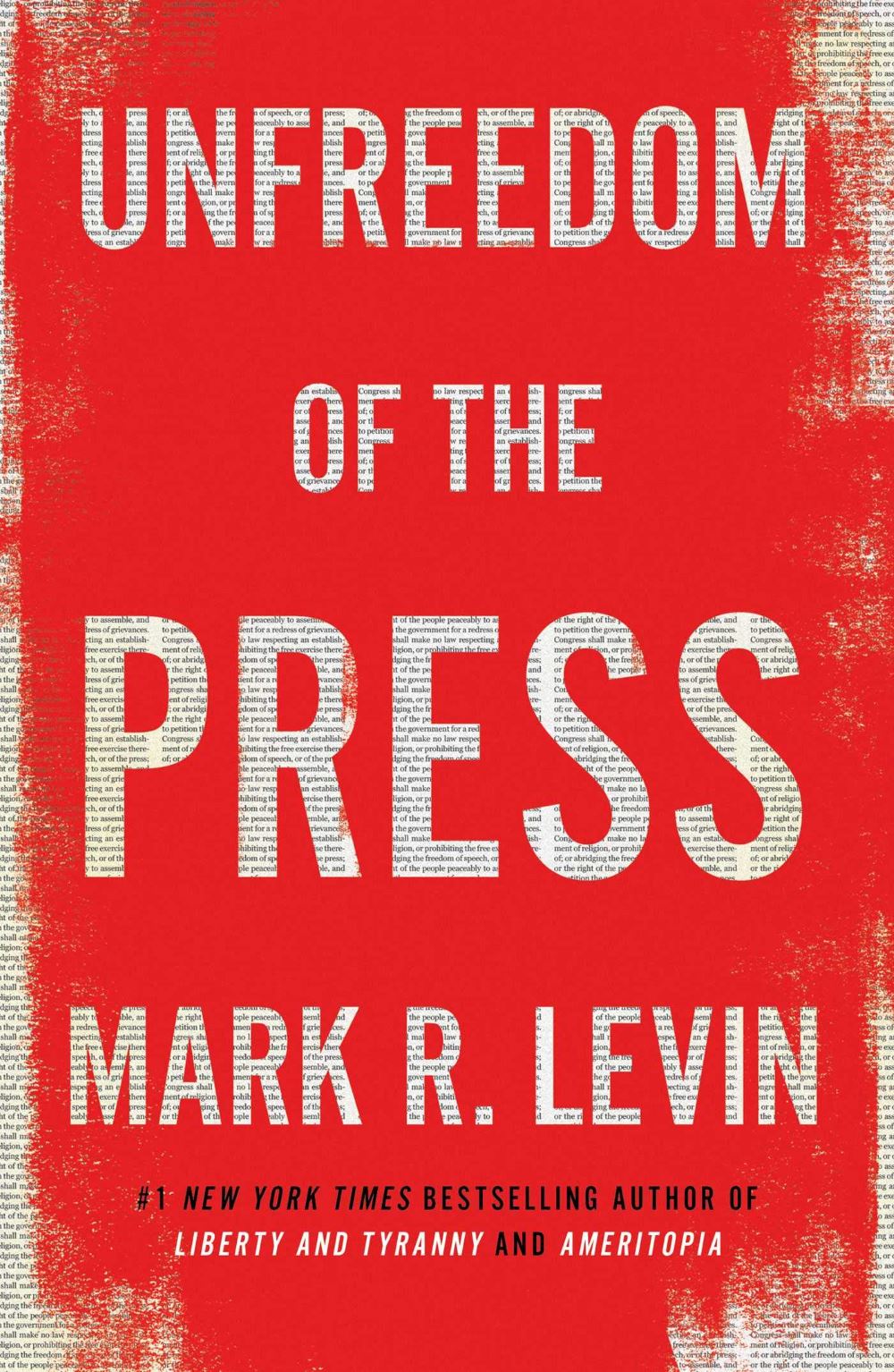 In just the few weeks since its May 21 release, Mark R. Levin’s Unfreedom of the Press has been perched atop The New York Times nonfiction bestseller list.

You just know that in the place where irony is calibrated, the needle on the meter must be going crazy.

Over at the newspaper that boasts it prints “all the news that fits,” they have no choice but to put this damning book on their bestseller list.

In just the few weeks since its May 21 release, Mark R. Levin’s Unfreedom of the Press has been perched atop The New York Times nonfiction bestseller list. It’s a clear sign that this book, which takes on “America’s newspaper of record,” is as popular as the five other books penned by the syndicated columnist, radio personality and TV commentator.

In these 258 pages, Levin, who is also an attorney, beams a spotlight on a problem that threatens at the very least the way Americans view their media. As he shows, the infection in the heart of modern-day media is a threat to one of the main pillars of American democracy: a free and objective press.

Long known for his take-no-prisoners conservative view of the world, Levin the persona takes a back seat here, replaced by Levin the historian, researcher and analyst. He painstakingly demonstrates that by abandoning their responsibility to report impartially, contemporary journalists cannot be trusted to tell the truth.

“The press is eroding from within, not from government oppression or suppression,” he writes, “not by President Trump’s hand, but by their own self-censorship, group-think, bias by omission, and passing off opinion, propaganda, pseudo-events and outright lies as news. … A self-perpetuating and reinforcing mindset has replaced independent and impartial thinking.”

‘A breakdown in integrity’

It was only a century ago, he writes, that the American press began to see its role as objective truth-teller; earlier, during the “party-press era,” it tended to promote one party or another.

But in the past, newspapers were fairly evenly divided between political parties, according to Levin. Whereas, he says, “today’s news outlets are overwhelmingly supportive of the Democratic party and hostile to the Republican party—particularly conservatives—and, these days, virulently antagonistic to President Donald Trump, his supporters and his policies.”

“Even the tone of the press reporting on President Trump has reached a level of invective rarely seen in politics,” adds Levin, who backs up the argument with seven pages of excerpts reflecting the overt hatred of many mainstream journalists, an attitude he calls “media-pack malevolency.”

Indeed, Levin makes a clear case that journalists and news outlets, even as they fiercely defend their right to freedom of speech, instead “serve as filters attempting to enforce uniformity of thought … centered on the progressive ideology and agenda. Issues, events, groups and individuals that do not fit the narrative are dismissed or diminished.”

It’s a breakdown in journalist integrity that was foreseen long ago, he reports. During World War II, Time and Life magazines publisher Henry Luce convened a Commission on Freedom of the Press (aka the Hutchins Commission). Its conclusions remain a cautionary tale that continues to haunt America more than 70 years later.

The modern press, the report said, “can play up or down the news and its significance, foster and feed emotions, create complacent fictions and blind spots, misuse great words and uphold empty slogans. Their scope and power are increasing each day as new instruments become available to them. These instruments can spread lies faster and farther than our forefathers dreamed when they enshrined the freedom of the press in our Constitution.”

It seems that this fearful scenario of the press using an ever-expanding bully pulpit (back then, they couldn’t foresee the reach of the Internet) to attack a common enemy has come to pass. “The media’s progressive ideology and Democratic Party bias are in full bloom as evidenced by their frenzied obsession with ‘getting’ President Trump,” Levin writes. “And, conversely, their disinterest and laxity respecting the roles of the Clinton campaign and the DNC, as well as the part played by the Obama FBI, Department of Justice and intelligent agencies, to thwart the Trump campaign and presidency.”

Why was the media so determined to use its power to unseat Trump even before he moved into Pennsylvania Avenue? Levin chalks it up in part to “their outrage over his electoral victory,” which the reader can interpret as “How could that ‘other’ America, the beer-swilling bowlers, defeat us, the liberal intelligentsia who should be calling the shots?”

Indeed, Levin brings to the fore many questionable moves—legal and sexual—by previous presidents that were consistently overlooked by the press. Their kid-glove handling of Presidents Kennedy and Johnson, in particular, he maintains, was due in no small part to the fact that the two of them had “defeated Republican candidates who were much hated by the media”—namely, Richard Nixon and Barry Goldwater.

Yet despite the persistently negative press coverage (an estimated 98 percent of news written about Trump is critical), the president “does not pose a threat to freedom of press,” writes Levin. Unlike with some other presidents, there have been no executive orders, FCC shutdowns of critical news outlets, or criminal charges against unfriendly journalists.

“Nevertheless, the constant media refrain is trying to convince the American people of a demonstrably false narrative, that President Trump has launched an unprecedented battering on freedom of the press … is media propaganda and a media-concocted pseudo-event,” he writes.

Often typified by what Levin describes as “wildly absurd and hysterical assertions,” the media has compared the president to such despots as Hitler and Stalin, and regularly describes him as a neo-Nazi white supremacist, mentally unhinged racist, and sometimes, even a psychopath.

Levin argues that journalists asking mental-health professionals to diagnose whether or not the president is mentally ill is particularly insidious and destructive.

It’s “perhaps the most inflammatory, scurrilous and pernicious allegation that can be made against a mentally healthy individual, but especially a president of the United States, as the purpose is to destroy his reputation with the public and foreign leaders and make governing as difficult as possible,” he writes.

One notable example: The accusation that the president colluded with the Russians—a charge Levin traces to the Hillary Clinton campaign, which was then snapped up by the media. Soon, the Democrats demanded a special counsel be appointed to investigate, cheered on by a blood-thirsty press. “In the end the collusion story and news scam turned out to be biggest pseudo-event perpetuated against the American people by the Democratic Party-press in modern times,” he concludes. Even after investigators could find no evidence that the president had ever colluded with the Russians.

Levin adds that anti-Israel bias at the Times and other American media became so egregious last year that U.S. ambassador to Israel David Friedman wrote these words when escalating Arab attacks on Israelis followed the move of the U.S. embassy to Jerusalem: “The next day the liberal media vilified everyone associated with the embassy move and glorified the poor Hamas terrorists.”

The damage goes well beyond prejudicial reporting, says Levin, who’s concerned that “when the media function as a propaganda tool for a single political party and ideology, they not only destroy their own purpose but threaten the existence of a free republic … should not ideology be reserved for the opinion-editorial pages of newspapers or the commentary segments of broadcasts?” he asks. “Whatever happened to ‘professional journalism’ and the promise or at least suggestion that the press ought to pursue the objective truth in the gathering and reporting of news?”

Instead, the membrane separating the media from the left has never been as permeable as it is right now, he adds. “What of the incestuous relations between journalists and the last Democratic administration?” he asks, citing an Atlantic report that at least 24 journalists were hired for jobs in the Obama administration.

One question that arises: Is the American public buying the party line the media is selling? One recent study (Gallup, October 2018) indicates that such one-sided coverage is further polarizing the country. The media credibility gap between Republicans and Democrats, now at an unprecedented 58 percent, has never been wider, with Republicans generally agreeing with the president that the press unfairly covers his administration and Democrats seeing the media as using its influence as “primarily checking the president’s power.”

And the reader is left with a second question as well, one that no one—not Levin, and certainly not the editor of The New York Times—can answer: Can the “ideologically driven press” waken from its slumber and return to its job of seeing and reporting both sides of an issue free of their own bias?

Levin is not optimistic. You can almost smell the air of resignation hanging over these words of his: “If newsrooms and journalists do not act forthwith and with urgency to ‘fundamentally transform’ their approach to journalism which sadly is highly unlikely, their credibility will continue to erode and may well reach a point soon where it is irreparably damaged with a large portion of the citizenry—and rightly so,” he writes on the final page. “The media will not only marginalize themselves, but they will continue to be the greatest threat to freedom of the press today—not President Trump or his administration, but the current practitioners of what used to be called journalism.” (JNS.org)