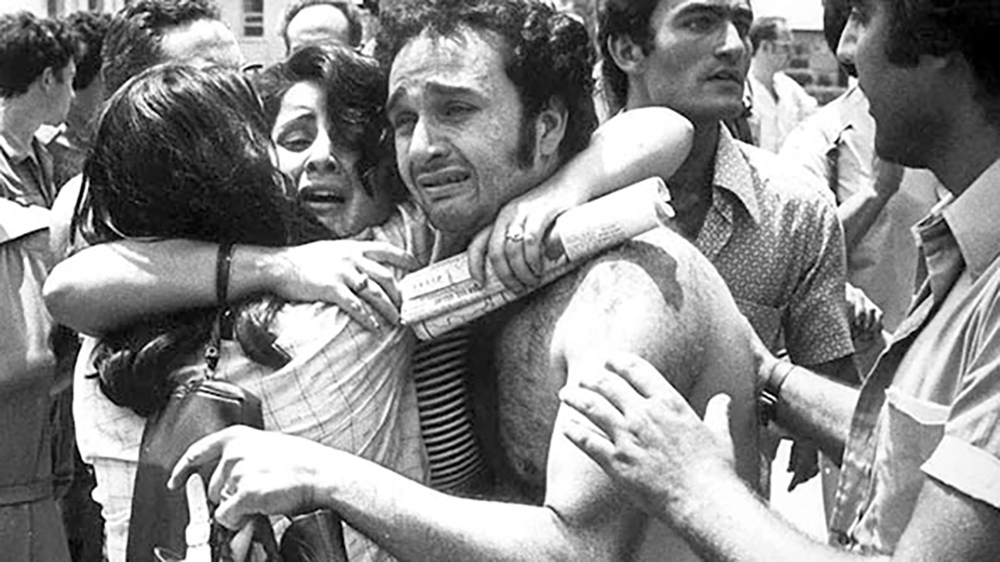 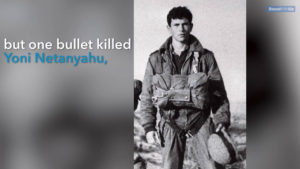 The only IDF soldier killed in the action was the unit’s commander, Yoni Netanyahu, the brother of Israeli Prime Minister Benjamin Netanyahu. The operation’s name was subsequently changed from Operation Thunderbolt to Operation Yonatan in his honor. A second soldier, paratrooper Surin Hershko, was shot in the spine during the assault and became a quadriplegic. Photo Credit: YouTube

The saga began on June 27, when a Paris-bound Air France commercial airliner took off from Tel-Aviv. The plane was scheduled for a stopover in Athens. Lax security at Athens International Airport enabled four terrorists with forged passports – two from the notorious West German Baader-Meinhof Gang and two from the Popular Front for the Liberation of Palestine – to board the flight with their guns, grenades and explosives. 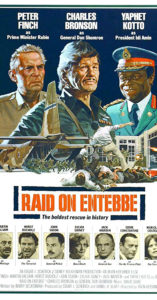 Their hijacking adventure set into motion a sequence of events that would reverberate around the world. It would also ultimately serve to further enhance the prestige and reputation of Israel’s vaunted, specialized commando units and intelligences services.

After a brief refueling stopover in Benghazi, Libya, the terrorists flew their commandeered Airbus A-300 to Entebbe airport in Uganda where they were given a hero’s welcome by their mercurial Ugandan host, the cannibalistically-inclined dictator, Idi Amin. In addition to providing them with safe haven, the despotic Amin placed elements of the Ugandan army at the hijackers’ disposal. In addition to the Ugandans, the terrorists’ ranks now swelled to seven, having been joined by three PFLP operatives during the Benghazi stopover. 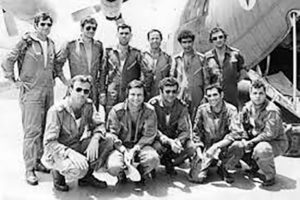 The Intelligence Heritage and Communication Centre of Israel released a book titled ‘Operation Yonatan in the First Person’, containing first-hand testimonies of 35 fighters who participated in the raid on July 3, 1976. Photo Credit: File Photo

Upon landing at Entebbe, the hostages were ferried to the airport’s old terminal building. As luck would have it, an Israeli construction firm had built the terminal for the Ugandans and promptly handed over the construction blueprints to Israeli intelligence for analysis. Still, the outlook was bleak for the hostages. Uganda was more than 3,000 miles from Jerusalem. Moreover, any attempt at air rescue would necessitate flying through radar coverage of three enemy countries – Egypt, Sudan and Saudi Arabia. The well-armed terrorists seemed insulated from attack. 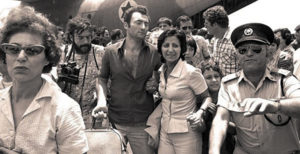 Soon after their arrival, the terrorists segregated those holding Israeli passports and those with Jewish-sounding surnames from the rest of the passengers. The Jews were placed in another room within the terminal. The depressing irony of armed Germans separating Jews – including Holocaust survivors – from non-Jews just thirty years post-Holocaust could not be overstated. 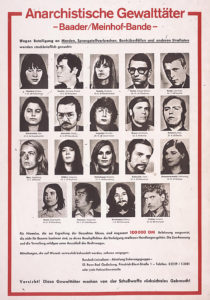 Lax security at Athens International Airport enabled four terrorists with forged passports – two from the notorious West German Baader-Meinhof Gang (pictured above) and two from the Popular Front for the Liberation of Palestine – to board the flight with their guns, grenades and explosives.

On June 29, the terrorists began releasing the non-Jewish passengers adding additional pressure on the Israeli government to act. The terrorists were transforming an international problem into an Israeli one in an effort to isolate the Jewish state. The Air France flight crew, headed by its captain, Michel Bacos, courageously opted to stay with the Israelis. Bacos died this year at the age of 95 and was recognized by both France and Israel for his heroism.

The release of the non-Jewish passengers represented the first critical mistake of the terrorists. They were immediately debriefed by Israeli intelligence on any information that could potentially assist in a rescue effort. One passenger in particular, Ninette Morenu, possessed a near photographic memory and provided detailed information that would prove invaluable to the rescue operation. Morenu, who was Jewish, was released by mistake due to her non-Jewish sounding surname. Her grandson, Emmanuel Morenu, would later become an officer in the Israel Defense Force’s Sayeret Matkal, the very unit charged with rescuing the Entebbe’s hostages.

Contemporaneous with the debriefing, the Israeli intelligence service, Mossad, dispatched an operative to fly a light plane over Entebbe to engage in aerial reconnaissance. The pilot informed the control tower that his plane was experiencing engine trouble and the Ugandans bought the ruse. The Mossad pilot’s photographs provided vital information on the strength, disposition and placement of the Ugandan forces at the airport.

Meanwhile, the hijackers demanded the release of dozens of terrorists held by Israel, Kenya, France, Germany and Switzerland and warned Israel that they would begin executing the hostages by midday of July 1, unless their demands were met. The Israeli government pretended to negotiate while formulating a rescue plan, winning an extension from the terrorists until 2:00 p.m., July 4.

Two plans were presented. The first involved a combined naval commando/paratroop crossing of Lake Victoria from Kenya and seizing Entebbe airport, located adjacent to its shoreline. The hostages would then be spirited out to Kenya with captured Ugandan trucks. This plan was deemed unfeasible. The second option and the one ultimately settled upon was a direct commando assault against Entebbe airport using C-130 Hercules aircraft.

The unit entrusted with spearheading the dangerous mission was Sayeret Matkal, an elite commando unit commonly tasked with carrying out hazardous missions at home and abroad. The Matkal commandos, 33 of them, would be the first to land. Paratroops in the other Hercules aircraft, under the command of Matan Vilnai, would touch down seven minutes later and serve as backup.

Tasked with leading the initial rescue assault force was Yonatan (Yoni) Netanyahu, a man who exuded confidence, and whose considerable military skill and experience made him ideally suited for the command. The unit’s sub-commander was Muki Betzer.

Betzer knew Uganda well having been stationed there some years prior as a military adviser. Relations between Uganda’s Amin and Israel were at one time cordial but soured after Israel refused to supply Amin with weapons that the Israelis believed would be utilized against Uganda’s neighbor, Kenya. Amin was also heavily influenced by Libya’s rabidly anti-Israel dictator, Muammar Qaddafi. Betzer’s opinion of the Ugandan soldier was low. In a documentary, he described their military capabilities as rudimentary (they knew how to load a magazine and read a map) and their motivation as low.

Assaulting Entebbe and rescuing the hostages with minimal casualties presented many challenges but simply flying the commandos there presented equally daunting challenges. The C-130s would have to evade the radars of three enemy countries. Moreover, the runway lights at Entebbe airport were expected to be closed forcing the massive transport planes to land in the dark. All these thoughts swirled through the mind of Joshua Shani, the Israeli Air Force squadron leader tasked with piloting the lead C-130 carrying the Matkal commandos.

To circumvent enemy radar, the C-130s flew the length of the Red Sea for some 900 miles at low level before penetrating the African continent toward Uganda. To Shani’s surprise and relief, the Ugandans had not turned off the runway lights. He landed his C-130 undetected. The other C-130s carrying additional forces would land approximately seven minutes later.

The Sayeret Matkal now had to cover approximately 2.4 kilometers of ground to reach the old terminal building where the hostages were held. A column of Land Rovers led by a black Mercedes, similar to the type used by Amin, stealthily made its way to the old terminal. A Ugandan sentry greeted the Mercedes by raising his Kalashnikov assault rifle. Betzer, who was familiar with Ugandan military greeting protocols, did not view the Ugandan’s actions as threatening, and urged Yoni to ignore the Ugandan and keep driving to the terminal. Netanyahu disagreed. He and another commando pumped several silenced rounds into the Ugandan. Unfortunately, it didn’t do the trick forcing another commando to fire his unsilenced AK-47 at the Ugandan to confirm the kill.

The burst of automatic fire broke the silence of the still night and alerted the Ugandans and terrorists to the presence of a potential problem. Undaunted by the loss of surprise, the commandos pressed forward and stormed the terminal, ordering the hostages to remain on the floor. A fierce firefight ensued with the Israelis firing short, controlled bursts, systematically eliminating all threats to themselves and the hostages.

Meanwhile, additional forces from the remaining C-130s arrived, and with sheer tenacity and firepower, helped the commandos overwhelm remaining opposition. Having safely secured the hostages and neutralized the enemy threat, the para-commandos turned their attention to Ugandan air force MiG -21 and MiG-17 jet fighters parked at the tarmac. Within minutes, the Israelis transformed Amin’s air force into a smoldering junkyard.

When the guns fell silent, all seven terrorists were dispatched along with some 20 to 40 Ugandan soldiers, and Amin’s air force was no longer a threat to the departing C-130s. Three hostages were killed, including Jean-Jacques Mimouni, a 19-year-old idealist, who in his excitement at seeing the commandos, stood up and began to cheer. A Matkal commando, possibly Betzer himself, mistook the young man for a terrorist and shot him dead. An unfortunate act of friendly fire cut short the life of a promising young man. A fourth hostage, the elderly Dora Bloch, who was at a Kampala hospital at the time of the raid recovering a choking episode, was murdered on Amin’s orders. Her remains were recovered some years later and brought back to Israel for burial next to her husband.

The only IDF soldier killed in the action was the unit’s commander, Yoni. The operation’s name was subsequently changed from Operation Thunderbolt to Operation Yonatan in his honor. A second soldier, paratrooper Surin Hershko, was shot in the spine during the assault and became a quadriplegic.

Operation Yonatan stands out as among the most audacious hostage rescue mission ever undertaken. Israeli soldiers, some of whom were the children of Holocaust survivors, flew some 3,000 miles to rescue Jews who were once again being victimized because they had the temerity to be born Jewish.

More significantly, the operation had consequences that reverberated far beyond Israel’s borders. Amin was humiliated internationally and the defeat of his army and air force set into motion a process that would ultimately lead to his overthrow.

In the decade preceding Entebbe, Palestinian terrorists were responsible for at least 50 skyjackings. Exasperated Western nations took measured comfort in the fact that finally, a resilient nation with backbone, took resolute military action against those waging war on civilization. Following the rescue, the skyjacking scourge declined measurably, and the Baader-Meinhof terror cell responsible for carrying out the hijacking jointly with the PFLP became largely ineffectual thanks to the liquidation of two of its central members as well as post-raid resignations and defections. Most importantly, Israel demonstrated to the world in spectacular fashion that the war on terror was indeed winnable.

Ari Lieberman is an attorney and former prosecutor who has authored numerous articles and publications on matters concerning the Middle East and is considered an authority on geo-political and military developments affecting the region.