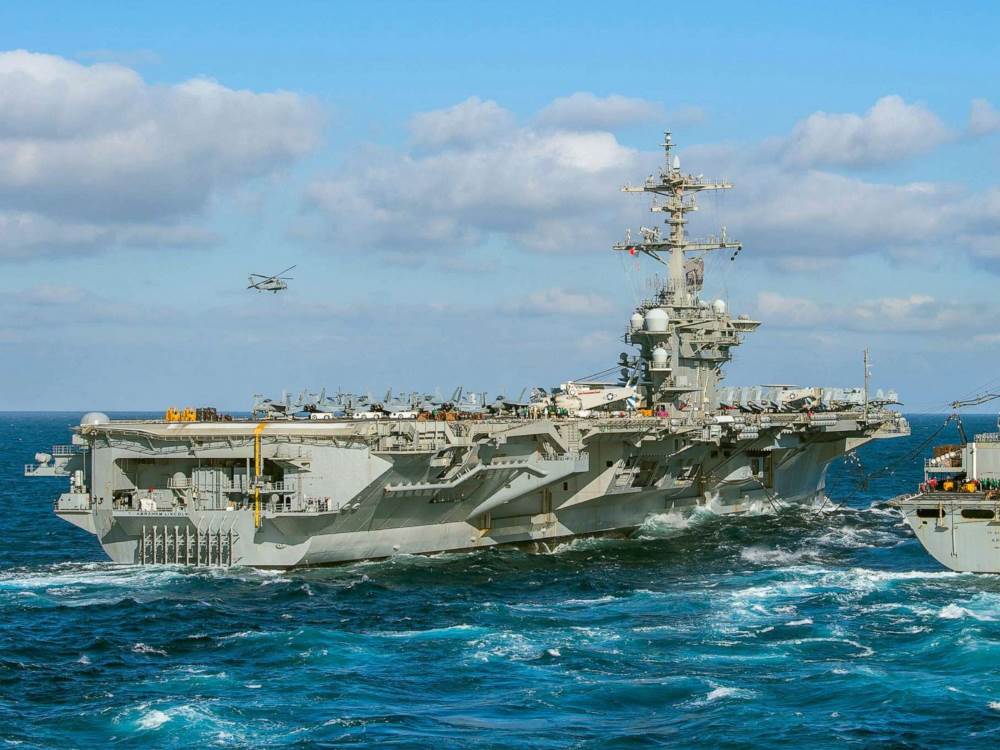 The United States is speeding up the arrival of a naval aircraft carrier strike group to the Arabian Sea after concerns were verified that Iran may possibly be planning an attack against American or allied targets. A Defense Department official said that the USS Abraham Lincoln "aircraft carrier is currently operating in the U.S. European Command area of responsibility (AOR), but will expedite its arrival into the U.S. Central Command AOR in order to defend American forces and interests in the region." Photo Credit: US Navy

The United States is speeding up the arrival of a naval aircraft carrier strike group to the Arabian Sea after concerns were verified that Iran may possibly be planning an attack against American or allied targets.

A US Defense Department official told VOA news that, “The USS Abraham Lincoln “aircraft carrier is currently operating in the U.S. European Command area of responsibility (AOR), but will expedite its arrival into the U.S. Central Command AOR in order to defend American forces and interests in the region.”

An Israeli journalist, Barak Ravid, reports the Mossad intelligence agency alerted the United States that Iranian elements may be preparing to strike American or allied targets in the Gulf region.

INN reported confirmed this assertion in a report on Monday that indicated that a significant portion of the information about Iran’s preparations for a terror attack against a US target or its Gulf allies were indeed obtained by Israeli intelligence, especially the Mossad.

Senior Israeli officials told Channel 13 News that the information obtained by the Mossad and other Israeli intelligence agencies was transferred to the Americans and was part of the basis for the American decision to reinforce their forces, sending another aircraft carrier to the Gulf, according to the INN report.

“It is still unclear to us what the Iranians are trying to do and how they are planning to do it,” Ravid quotes an Israeli intelligence officer as saying. “But it is clear to us that the Iranian temperature is on the rise as a result of the growing U.S. pressure campaign against them and they are considering retaliating against U.S. interests in the Gulf.”

Acting Defense Secretary Patrick Shanahan, on Twitter, stated that the deployment of a naval carrier strike group and an air force bomber task force to the area “represents a prudent repositioning of assets in response to indications of a credible threat by Iranian regime forces.”

The comments follow those made by National Security Adviser John Bolton on Sunday evening.

A “number of troubling and escalatory indications and warnings” linked to Iran prompted the United States to deploy an aircraft carrier strike group and bomber task force to the Middle East,” Bolton said in the statement.

The dispatch of the carrier strike group and the bomber task force is intended to “send a clear and unmistakable message to the Iranian regime that any attack on United States interests or on those of our allies will be met with unrelenting force,” added Bolton.

In addition to the USS Abraham Lincoln aircraft carrier, the strike group included fighter jets, helicopters, destroyers and more than 6,000 sailors when it left its U.S. port in Virginia in early April.

The Nimitz-class carrier was in the Adriatic Sea as of May 1 when Albania’s president, Ilir Meta, visited the 333-meter-long vessel.

Bolton’s statement said the United States “is not seeking war with the Iranian regime, but we are fully prepared to respond to any attack, whether by proxy, the Islamic Revolutionary Guard Corps, or regular Iranian forces.”

New America Foundation Fellow Ned Price says recent actions to sanction the IRGC and end sanctions waivers for some of the country’s biggest oil buyers make it seem like the Trump administration “seems intent on driving the Iranians into a corner.”

“The concern with Bolton’s threat — coming in the midst of a series of escalations from the Trump administration — underscores the concern that the administration is trying to goad the Iranians into an unwise and ill-considered reaction,” Price, a former spokesman for the Obama-era National Security Council, told VOA.

The Trump administration has been working to apply what it calls a “maximum pressure campaign” against Iran to try to get the country to change its behavior, including its sponsorship of terror groups and what the White House alleges is a ballistic missile program that threatens the United States.

In response to last month’s U.S. designation of the IRGC as a terrorist group, Iran responded by declaring the United States a state sponsor of terrorism and its forces in the Middle East as terror groups.

Daniel DePetris is a fellow at Defense Priorities, a research group that advocates that America maintain a strong, dynamic military but wants it to try to avoid being deployed in overseas wars. DePetris says that while Iran is meddlesome, the threats it poses can best be addressed with deterrence and diplomacy, according to the VOA report.

“Maximum pressure will fail to change the regime’s behavior, but it will ratchet up tensions between the U.S. and Iran, possibly inciting a crisis or war, something Trump promised to avoid during his campaign,” DePetris told VOA. “This is more evidence of a troublesome disconnect between the president and the people who ostensibly work under him. The Iranians are meddlesome actors, but they’re far from a threat to the U.S., the world’s only superpower.”

The vice president of the Heritage Foundation’s Institute for National Security and Foreign Policy praises the U.S. move.

“The U.S. is a global power with global interests and responsibilities,” James Jay Carafano told VOA. “It’s a powerful statement to demonstrate the U.S. is not distracted by a host of challenges in Venezuela, by provocations from North Korea, and yet, the U.S. has the resolve and capacity to show it can stand strong in the Middle East, as well.”

Bolton’s statement is raising concern in other countries.  India, whose economy is largely fueled by imported crude — much of it from Middle East countries such as Iraq and Saudi Arabia — is worried about the security of sea lanes through which its energy supplies flow.

With its pressure campaign, the U.S. administration is trying to get Iran to halt activities such as supporting militant activities that destabilize the Middle East and threaten U.S. allies, including Israel, Secretary of State Mike Pompeo said, according to an AP report.

“We have continued to see activity that leads us to believe that there’s escalation that may be taking place, and so we’re taking all the appropriate actions, both from a security perspective as well as our ability to make sure the president has a wide range of options in the event that something should actually take place,” Secretary of State Mike Pompeo told reporters Monday in Finland.

“Our objective is to get the Islamic Republic of Iran to behave like a normal nation,” Pompeo added. “When they do that, we will welcome them back.”

Asked about “escalatory actions,” Pompeo replied, “I don’t want to talk about what underlays it, but make no mistake, we have good reason to want to communicate clearly about how the Iranians should understand how we will respond to actions they may take.”

According to the AP report, Mark Dubowitz, who studies Iran for the Washington-based policy institute Foundation for Defense of Democracies, said a credible threat of overwhelming force “will make war less likely.”

“If past is prologue, the regime will always move aggressively forward when it senses American weakness and recoil when it sensed American strength,” Dubowitz said.

The AP reported that in Iran, the semi-official ISNA news agency on Monday quoted an anonymous official as saying that Iranian President Hassan Rouhani planned a broadcast address Wednesday and might discuss “counteractions” Tehran will take over America’s withdrawal from the international nuclear deal.

“Partial and total reduction of some of Iran’s commitments and resumption of some nuclear activities which were ceased following JCPOA are the first step by Iran responding to US’ withdrawal from the nuclear deal and the lack of commitment from European countries to meet their vow,” ISNA reported.

The agreement limited Iran’s enrichment of uranium amid Western concerns that Tehran’s program could allow it to build nuclear weapons.

“Iran’s withdrawal from the nuclear deal is not considered as an option for now,” the report added.

Newsweek reported that according to Iran’s semi-official Tasnim news agency, Keyvan Khosravi—a spokesperson for the Supreme National Security Council—issued a statement on the deployment of the carrier group and the bomber task force, announced by Bolton on Sunday.

“Bolton’s statement is a clumsy use of an out-of-date event for psychological warfare,” said Khosravi, according to Al Jazeera. He also suggested that Iranian forces had been tracking the carrier group since it arrived in the Mediterranean Sea 21 days ago.

Iranian Foreign Minister Mohammad Javad Zarif warned that a “B-team” around Trump—including Bolton and Israeli Prime Minister Benjamin Netanyahu—were pushing for conflict with Tehran, as was reported by Newsweek. “The B Team is pushing U.S. policy toward a disaster,” Zarif said. “The plot is to push Iran into taking action. And then use that,” he claimed.

The AP reported that the order to the carrier group would get the Abraham Lincoln into the Middle East about two weeks earlier than initially planned following exercises in the Mediterranean region, according to a U.S. defense official who wasn’t authorized to speak publicly, so spoke on the condition of anonymity. It forces the ships to cancel a planned stop in Croatia.

For years, the U.S. maintained a carrier presence in the Persian Gulf and Middle East region. During the height of the wars in Iraq and Afghanistan, there were two carriers in the area, but that was reduced to one.

Last year the administration decided to end the continuous carrier presence, and send a strike group only intermittently into the region. The U.S. Navy currently has no aircraft carrier in the Persian Gulf, according to the AP report. (VOA, AP, Newsweek & INN)